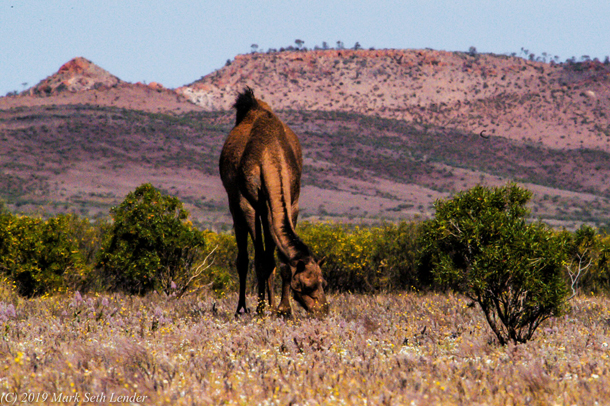 A camel grazes in a patch of wildflowers near the Henbury Craters in Australia. (Photo: (c) Mark Seth Lender)

Camel is the archetypal Beast of Burden. The dromedary (single-humped) camels of Henbury have the distinction of being wild, a condition duplicated nowhere else on earth. Current estimates are that 300,000 wild camels remain in Australia, an order of magnitude less than what people used to say. Camels also have a much lower rate of reproduction than originally thought. They can be destructive during drought, and can foul watering holes, but they are manageable if kept out of critical environments and at moderate population, one to two camels per kilometer square. A density they seldom approach. They seem to keep their numbers in check on their own.

That number struck me. Traditional desert people living in the same area needed between 50 and 200 square miles per person to survive depending on how far into the desert they ranged. In the desert it can be a long time (as much as a decade) from one rain to the next in a particular locale. Plant growth follows rain and since hunter-gatherers are in reality gatherers who occasionally hunt, edible vegetation and its rate of regeneration are also hard limits and define how quickly a group can reoccupy an area once they vacate it. Traditional usage, camels, and for that matter kangaroos all become irrelevant when compared to what cattle and sheep extract from a fragile land.

Back of Burke (Aussie for the butt end of nowhere), cattle are grazed at a density of two to almost 30 animals per square kilometer, and a pound of consumable beef requires 440 to just under 600 liters of water to produce. Australia is the third-largest meat exporter in the world, producing an estimated 1,385,000 metric tons of beef. And Australia is running out of water. The great fires now sweeping the outback with increasing frequency are only the most apparent effect of that great drying up. Eliminate the camels, Australia is still going to run out of water. And it is still going to burn.