Mangroves Thriving in a Warming World 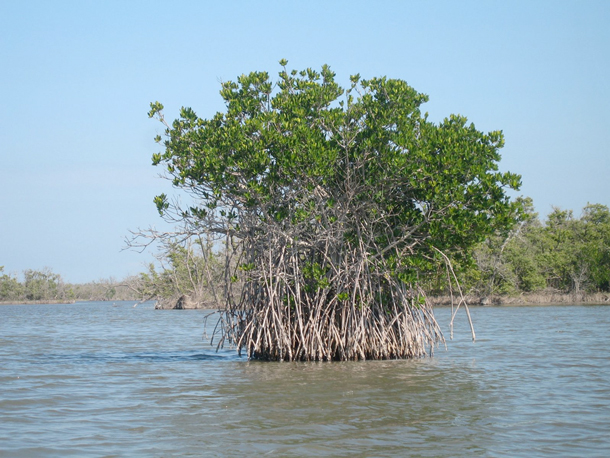 Rising temperatures are enabling mangroves, resilient trees that grow in saltwater, to expand their range in Florida and beyond. Brendan Rivers of WJCT in Jacksonville reports.

BASCOMB: Scientists are sounding the alarm on biodiversity loss in nearly every corner of our planet. But with climate change some important ecosystems are actually expanding. Among them, mangroves. Mangroves are hardy trees that grow in salt water and serve as a first line of defense against hurricanes. They’re also a crucial breeding ground for marine life. And now, as the planet warms, mangroves are expanding their habitat both north and south, which may in turn actually help slow the advance of climate change. Brendan Rivers is a reporter for WJCT in Jacksonville, Florida and has the story.

RIVERS: Danny Lippi is walking through Nease Beachfront Park, just across the bridge from historic downtown St. Augustine. The park is dense with trees.

LIPPI: These are, all of these are mangroves.

RIVERS: Lippi a certified master arborist, one of the professionals the state allows to trim them.

LIPPI: I've been here since 1981, you know on and off, and I don't remember the mangroves like this when I was a kid.

RIVERS: Mangrove ranges historically wax and wane with the weather, but more mangroves are arriving in Northeast Florida and thriving as climate change raises temperatures. Lippi says as more arrive they're also growing taller, blocking waterfront views and greatly boosting demand for his services among homeowners.

LIPPI: In this situation, they're being forced to hire me.

RIVERS: But not everyone finds mangroves to be a nuisance. Nature Conservancy marine scientist Laura Geselbracht says their spread is helping reverse a global trend.

GESELBRACHT: A huge number of our mangroves, 35% worldwide, have disappeared and a lot of that disappearance has been the result of coastal development.

RIVERS: She says the more mangroves, the better, because the trees could actually help slow climate change. Mangroves absorb four times as much heat trapping carbon as rainforests, she says. At their current rate, scientists project they could push up into Georgia within the next decade, migration fueled by fewer freezes and stronger storms that spread their seeds.

GESELBRACHT: 25% of Florida's greenhouse gas emissions may be reduced by the amount of mangrove expansion over the next decade or two into Northern Florida and even beyond.

RIVERS: And they offer more immediate benefits too. Just ask Linda Mulay who lives in a waterfront condo in Port Orange just south of Daytona Beach. From her balcony she can see mangroves surrounding her building seawall. Mulay says when Hurricane Irma came through in 2017, she fared just fine.

MULAY: We didn't have any water damage. Which, storm surge is your biggest damage you have from a hurricane.

RIVERS: Researchers say if mangroves are wide and dense enough they can provide effective flood protection during storms. They also help fight sea-level rise by raising the height of the coastline. That's why University of California Santa Cruz researcher Michael Beck is partnering with FEMA and the insurance industry to fund their conservation and preservation.

BECK: Without mangroves, we think that on average, damages to properties for storms would increase by 16% annually.

RIVERS: He says they're credited with preventing $13 billion in property damage in the U.S. each year.

BASCOMB: Brendan Rivers is a reporter with WJCT in Jacksonville, Florida and host of the Adapt podcast. His story was produced in partnership with Climate Central with reporting by Ayurella Horn-Muller.