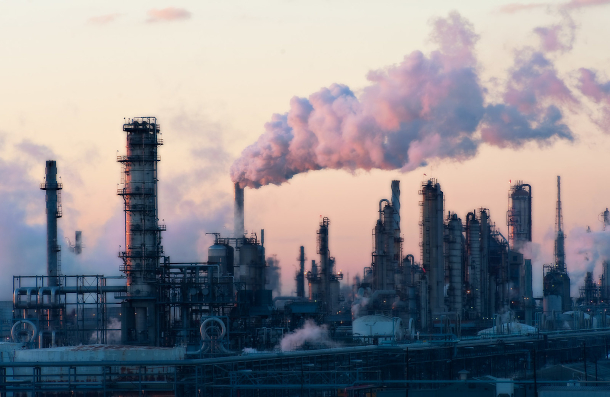 A refinery in Houston, Texas, where the petrochemical industry sends significant amounts of carcinogenic compounds into the air, raising the risk of developing cancer. (Photo: Louis Vest, Flickr CC BY-NC 2.0)

Millions of Americans are breathing toxic air pollution emitted from industrial facilities, often without their knowledge. The nonprofit investigative newsroom ProPublica recently created an interactive map that highlights the EPA’s failure to account for cumulative cancer risk for Americans who live near several industrial facilities. Lisa Song is a climate and energy reporter with ProPublica and discusses the team’s findings with Host Bobby Bascomb.

Air quality in the United States has improved a lot since Congress passed one of the strongest environmental laws in U.S history, the Clean Air Act of 1970. Smog, sulfur dioxide, nitrogen oxides and more have declined over all and most Americans can breathe easier. But many of us still suffer from toxic air. In some neighborhoods located near industrial areas, air pollution far exceeds levels considered acceptable by the Environmental Protection Agency. Those air pollutants include carcinogens like benzene, ethylene oxide, and the heavy metals chromium, cobalt, and nickel. And until now if you wanted to know about the extra cancer risk you could face from living near these sources you were out of luck. Now in a first-of-its-kind map and data analysis the nonprofit investigative newsroom ProPublica has yielded new insights into how multiple sources of industrial carcinogens can add up to elevated cancer risks for local neighborhoods. Lisa Song is a climate and energy reporter at ProPublica and part of the team that put together the analysis. She’s also a former Living on Earth intern and joins me now from New York City. Welcome back to Living on Earth, Lisa!

SONG: Thanks for having me.

BASCOMB: So what's new about this mapping tool? What are you trying to show here?

SONG: What we're trying to show is the cumulative industrial cancer risk from major sources of toxic air pollution. And this is important because the way the EPA normally assesses industrial cancer risk is they do it for one type of facility at a time. And so that often underestimates the estimated cancer risk because so many people are living in close proximity to several different industrial facilities at once.

BASCOMB: And so how can you use this, as a user, if you go to the ProPublica site, how can a person use this information that you've put together?

SONG: So we put this data together into a searchable map, so you can type in your home address or your work address, and it will zoom in to your exact place and show you at a very localized level the estimated additional cancer risk from these big industrial facilities in your area. And if you live in one of those places where you don't have a facility nearby, it will tell you that, you know, the nearest facility is six miles away, or 10 miles away, or whatever the number is. You can also just put in the name of a town or a city. And it will give you a kind of city wide overview to say, you know, this area with a population of roughly this many people, you know, the largest estimated cancer risk in this area is x and the average is y, something like that.

BASCOMB: And so just to be clear, this is EPA's data and it's going into your database.

SONG: Yes, the raw data from this comes from the EPA. And what they've done over the years is they take the annual data that the industries report to EPA about how many pounds of benzene or how many pounds of chromium they emit into the air every year. And then the EPA runs its own air model on these emissions, to model out where the emissions are going, kind of, where they go geographically and the concentrations at places on the map. And so all of this raw data has been in EPA's possession for, for many years. And what ProPublica did is we analyzed it and put it together in a way to make it searchable and usable and practical for the public.

BASCOMB: And so you identified more than a thousand hotspots around the country where industrial sources emit carcinogenic air pollution. Where are they generally located?

SONG: Most of these hotspots are in southern states. So the top hotspot on our map is what's known as Cancer Alley in a part of Louisiana. And then other top hotspots are, there's one near Houston, and then there's one in Orange, Texas,

BASCOMB: This is the same area where they're looking to expand, and we've covered some stories in the past on the show about ethane crackers and looking to site new ethane cracking facilities in the same area where people already have an elevated health risk associated with industry. And EPA knows about it, it almost seems like these are just kind of sacrifice zones.

SONG: Yeah, and that, that is the term we and others have used to describe these areas. And it's important to remember that this is simply how our regulatory system is set up. It was not set up to adequately account for cumulative risks. The way the EPA assesses risk, you know, they're slicing and dicing the risk in a way that, for example, if you live near two refineries, they will look at the risk from both of those refineries together. But if you live next to a refinery and a chemical plant, then EPA is not going to be looking at the total risk from both of those facilities, because they're considered two different types of facilities. So that oversight is baked into the way that the EPA does its regulations right now. And when we spoke with EPA officials, they did say that the Biden administration plans to take a look at this and perhaps have a new approach. But that's something that's going to take time. So right now, you know, we have not seen that concrete action yet.

BASCOMB: Well, let's talk about one of the people that was featured in your article. Tell me about Brittany Madison, please.

SONG: Sure. Brittany lives in Baytown, which is near Houston, and she lives with her family. And they live next to many, many different industrial facilities. So Brittany's apartment is within 30 miles of more than 170 facilities that give off toxic emissions. And we looked at the three facilities that account for most of the risk on her block. Those facilities include an ExxonMobil refinery and then two other large facilities. So if you look at the risk of each of these facilities in isolation, the risk is relatively low. So the refinery, for example, increases the estimated risk of getting cancer on her block by about 1 in 730,000. And then, you know, the two other facilities are somewhere in the range of 1 in 100 [thousand] or 200,000. But then when you add up the combined risk from all three facilities, plus all the other facilities in the area, the estimated additional cancer risk jumps to 1 in 46,000. So you can see how quickly these combined risks add up together. And when we spoke with Brittany, she talked about how her niece, who's only three years old, has asthma and needs asthma treatments, how she and her family have suffered from headaches and migraines and other ailments, particularly after an industrial accident at the refinery a couple of years ago. She's had family members who have died of cancer, she's had family members who have worked for the industrial sector. And one thing to keep in mind about our map in our reporting is it's very difficult to prove that a particular person's cancer was caused by a particular type of pollution. But we do know that these air pollution risks compound cancer risk overall.

BASCOMB: I believe you said her cancer risk, when you overlay all of these these hazards, is 1 in 46,000. What is the EPA threshold, if there is one for concern? I mean, at what point is there some sort of intervention, even?

BASCOMB: And I believe you even drill down further into the US population as a whole to see where we lie in the spectrum of cancer risk. What did you find there?

SONG: Well, in terms of the EPA's aspirational standard, we found that 74 million Americans live in places where the estimated risk is greater than 1 in a million. And that's something like a fifth of the US population. If you're looking at places with higher than 1 in 10,000 risk, which the EPA generally uses as an upper limit, then about a quarter million people live in those places. You've got places like Cancer Alley, certain parts of Texas, but also other states as well. There's a lot of smaller pockets of hotspots in places that maybe the residents don't even know they're living there. 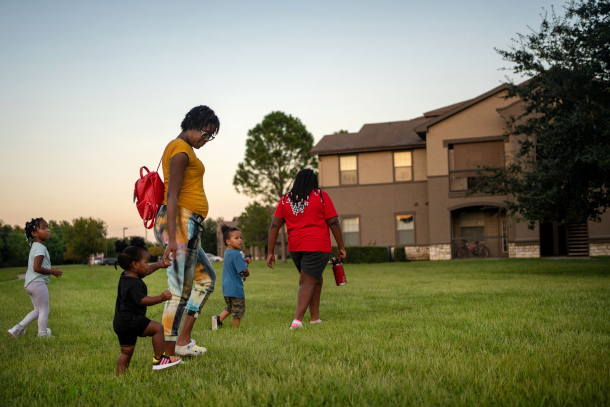 Brittany Madison walks her nieces and nephew to the apartment they share with her sister in Baytown, Texas. (Photo: Kathleen Flynn for ProPublica)

BASCOMB: And Brittany Madison is African American, and we know that communities of color tend to bear out more pollution burden than predominantly white communities. To what extent were you able to quantify that risk for black communities using this mapping tool?

BASCOMB: You know, how do you hope the public will use this tool that you've come up with?

SONG: I think the first thing is we just want the public to be aware and to you know, search for their own homes, to search for their friends' and families' homes and see, are you living in an area that is a hotspot? And if so, we've actually published a guide for residents in hotspots that explains to them, what are the types of things that community groups in other hotspots have done historically? The guide, we hope, will perhaps give them more context to our findings and help alleviate certain anxieties. The guide also explains that very organized communities in Cancer Alley, for example, they have done things like campaign for regular air monitoring. They've looked for funding to conduct their own independent air monitoring. Some communities have done things like worked with the facilities so that they're all notified whenever the facility has some kind of unexpected accident. Other people have purchased air filters to use inside their homes to make the air a little bit safer indoors, and other communities even have worked with lawyers and filed lawsuits. So there's really a whole bunch of things that these types of communities have done historically. And we're hoping that our guide can just help inform and perhaps empower people who are discovering they're in hotspots for the first time.

BASCOMB: Lisa Song is a climate and energy reporter for ProPublica. Lisa, thank you so much for this wonderful tool and for chatting with me today.

BASCOMB: We reached out to EPA to ask about potential plans to change the way they assess cumulative risk from industrial exposure.


ProPublica | “Poison in the Air”