Mold is an increasing problem in schools across the country. Many students and staff are complaining of health problems and it’s costing school districts a lot of money to remove the mold. Janet Heimlich reports on a school district in Austin, Texas that’s struggling to pay for testing and mold removal at three schools.

CURWOOD: Molds are a type of fungus, and out in nature molds play an important role in breaking down dead and decaying matter. But if they get inside buildings, mold toxins and reproductive spores can lead to serious illnesses, including sinus infections and asthma attacks. In Texas, the Austin Independent School District has been hard hit by mold, and its removal is running into the millions of dollars. Janet Heimlich reports.
HEIMLICH: Robin Sykes' daughter, Caroline, is in the fourth grade at Patton Elementary School in Southwest Austin. Ms. Sykes says Caroline has been getting occasional headaches since the first grade, but they were never very bad.

SYKES: Near last spring, though, I noticed the headaches began to become more severe. She complained about them practically every afternoon. And the only thing that would make them go away was to take Motrin and lie down for a couple of hours. So I became concerned. 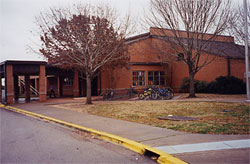 HEIMLICH: Other parents at Patton were also complaining that their kids were having health problems, such as coughing and upper respiratory infections. Ms. Sykes says she began to suspect that mold was the culprit. Patton has had water leaks over the years. Toward the end of the school year the school district brought in an air quality specialist. His tests revealed that there was mold hiding behind the walls of nearly every classroom, so crews have been removing sheetrock walls throughout the building.

HEIMLICH: As you walk down the halls of Patton Elementary School, you notice that some classrooms have been sealed off from the public. Their doors are locked, and plastic sheeting hangs in the doorways. Inside, the rooms have been gutted.

LAUDERDALE: You can see they've done a little bit in here.

HEIMLICH: Jerry Lauderdale is an indoor air quality consultant hired by the school district to oversee testing in mold removal. The room he is standing in looks like it's under construction. Its sheetrock has been removed from the walls, revealing metal studs with insulation in between. At the base of the walls, a couple of feet of insulation has also been removed. Mr. Lauderdale says it was here that crews found several inches of mold.

LAUDERDALE: Kind of black, splotchy areas of mold growth on the surface of the sheetrock right behind that base trim, in many areas. 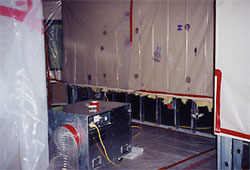 HEIMLICH: Mr. Lauderdale says bad construction likely led to water getting into the walls and growing mold. So when crews replace the sheetrock here, they'll use better construction techniques. Patton is one of the handful of Austin schools with serious mold problems. Experts say humidity plays a part, but the number of so-called "sick schools" is increasing across the country. No one's tracked those numbers, but indoor air quality consultants say they're getting many more calls from moldy schools these days than ever. Marilyn Black is chief scientist at Air Quality Sciences, in Atlanta. Ms. Black estimates that the percentage of schools with mold problems has grown nationwide in the last five years, from two to ten or fifteen percent.

BLACK: I can remember, ten years ago, when you went into a school and there was concern about an indoor quality complaint, it was often hard to find the cause. You really had to search very significantly whether it might be a chemical exposure, pesticide exposure. Now when you go in, you can literally see the mold growth.

HEIMLICH: Ms. Black says more schools are being affected now because shrinking budgets make it harder for schools to keep up maintenance and hire good contractors. Some say schools built in the last 20 or 30 years are particularly vulnerable to mold because they're poorly ventilated and have flat roofs which are prone to leaks. Also, numerous schools are lined with sheetrock, which mold likes to feed on. Now, schools are struggling to pay to have the mold removed or rebuild their facilities. Dr. Edward Fuentes is the deputy superintendent who oversees construction and maintenance for the Austin Independent School District. Dr. Fuentes says his district is looking at a bill of about $18 million, to pay for testing and mold removal at three schools.

FUENTES: What's happening is that we have to take the money out of our regular operating funds to fund this stuff, and if you want to pay teachers well enough to keep them, you want to add programs or others, that's competing.

HEIMLICH: To pay to remove mold and fix leaks in some 90 schools, the Austin School District has introduced a $49 million bond measure. It will be voted on February 2nd. But despite the financial pains, the problem has brought to light the possible health effects of indoor mold. It's known that people who are allergic to outdoor mold suffer with sinus congestion, watery itchy eyes, and other symptoms. But when mold gets inside a building, it can affect even those who have no known allergy to mold. Dr. David Straus is a professor of microbiology and immunology at Texas Tech University Health Sciences Center in Lubbock.

STRAUS: What's different about being inside of a building, of course, as opposed to outside, is that as these organisms grow in the building, their concentrations increase. It's really just like them living in a box.

HEIMLICH: In 1998, Dr. Straus completed a study of 48 Texas schools with mold problems. He interviewed the staff before and after mold was removed. Dr. Straus says after the mold was gone complaints of health problems dropped significantly.

STRAUS: There was an absolute correlation between the presence of these organisms in the building and the phenomenon we refer to as sick building syndrome.

HEIMLICH: Dr. Straus says some molds are more toxic than others. It's still unproven whether these molds cause such serious ailments as bleeding lungs and memory loss. At Patton Elementary School researchers found a number of different kind of toxic molds. Last year, administrators and others doubted mold was making people sick, but today you'll find few skeptics at Patton.

Robin Sykes, whose daughter was having bad headaches, says Caroline got better when summer came around and she was away from school. Teacher Michael Massed says before mold was found in his classroom and he and his third graders were moved to a different space, he had had a persistent cough and nasal drip.

MASSED: I still really couldn't quite bring myself to say yes, it's because of the mold, but since I've moved out here I have clearly felt a lot better. I haven't been to the doctor once. So now I'm thinking, while it's still unscientific, I have to think that it had something to do with being removed from that environment.

HEIMLICH: Mr. Massed says he hopes the bond measure to renovate Austin schools will pass. That way, the district will have enough money to pay for both important educational programs and a safer environment. For Living on Earth, I'm Janet Heimlich in Austin.

CURWOOD: And you're listening to NPR's Living on Earth.