Animals in the wild have a wealth of natural remedies at their disposal. The question is whether they know how to use them when they’re feeling ill. Living on Earth’s Diane Toomey talks with Cindy Engel, author of the book Wild Health: How Animals Keep Themselves Well and What We Can Learn from Them.

CURWOOD: It's Living on Earth. I'm Steve Curwood. Zoopharmacognasy. Maybe you've never heard the word before, but perhaps you've seen it in action. It happens when your cat or dog starts eating grass when he's feeling ill, or when a sick cow starts to lick clay to get rid of toxins in her body. Zoopharmacognasy is the study of animal self-medication, and it's the subject of a new book called "Wild Health: How Animals Keep Themselves Well and What We Can Learn From Them". Living on Earth's Science Editor Diane Toomey spoke with the book's author, Cindy Engel.

TOOMEY: Professor Engel, you give many examples in your book of how animals appear to be medicating themselves in the wild, and I'd like you to read a little portion of the section where you write about South American capuchin monkeys and their encounters with millipedes.

ENGEL: Okay. Upon finding one of these large, as long as eight centimeters, millipedes. A capuchin gets it to release its defense of toxins by rubbing it and rolling over it, intermittently taking it into its mouth without eating, and slowly withdrawing it again. During mouthing, the monkey drools copiously and its eyes glaze over. One millipede can be shared by several capuchins. Those that do not have one of their own rub against others that are already covered in secretion. The result is the anticipated writhing cluster of drooling monkeys.

TOOMEY: What an image. Professor, why would monkeys rub millipedes all over themselves?

ENGEL: Well, they live in an environment where they are under almost constant attack from biting insects, and any small hole in the skin is going to leave them open to bacterial and fungal infections-- this is a very warm, moist environment. And obviously, the skin is therefore going to be quite uncomfortable and quite irritated a lot of the time. 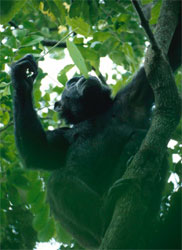 TOOMEY: How do animals know what to do when they're ill?

ENGEL: Well, from reviewing the research to date it seems that the most common method that they're using is trial and error of something that actually makes them feel better. And the reason I say that is because in laboratory studies it's been shown that if you take a sick rat, the rat will increase the diversity of the type of foods that it's eating until it finds something that makes itself feel better, and then it will concentrate on eating that. So, that's one mechanism that's going on.

TOOMEY: And there's also a fascinating theory that you write about in your book that animals and humans alter their tolerance for bitterness.

TOOMEY: And this may be a clue as to what substances they take in when they're ill. Talk to us about that.

ENGEL: The story came particularly from chimpanzee self-medication. It was noticed that very sick chimpanzees who are kind of overloaded with nodule worm infestations will go and choose the most bitter plant in their environment, called bitter pith-- and it's known locally as goat killer, it's that horrible. But a sick chimpanzee will suck this pith on and off for 12, 24 hours, until they get better. And Michael Huffman of Kyoto University has found out that this directly reduces the amount of nodule worms. The nodule worms are killed by the toxins in this plant.

TOOMEY: Perhaps it doesn't come as a surprise that an animal as intelligent as a chimp may be able to self-medicate, but you have some examples of even insects medicating themselves-- if you could tell us about that.

ENGEL: That's right. And the example that interests me is one by Rick Karban and his team at California where they were studying the effects of these lethal parasites on wooly caterpillars. And what happens normally when you study these caterpillars in the laboratory is that they get infected with these parasites. The fly lays its eggs inside the abdomen of the caterpillar and the larvae grows so large that the caterpillar dies. And so, because they're normally lethal, these parasites are called parasitoids-- meaning that they always kill their host, as it were.

And the team of scientists were studying this in the laboratory but they got overcrowded, and they had to start using outdoor enclosures. And when they did they found something very interesting, because as soon as they started observing these infected caterpillars outside they discovered that the caterpillars survived these apparently lethal paresitoids, and they discovered that the caterpillars were able to do this because they had choice of medicinal herbal plants in their outdoor enclosures. And the thing that was saving them was that they were switching their diet to toxic hemlock, and the hemlock was, somehow, helping prevent the parasites from killing the caterpillars.

TOOMEY: You make a point of explaining the reasons behind the difficulty of studying animal self-medication in the wild. What are some of the difficulties in this field?

ENGEL: When youíre looking at animal self-medication you've quite often got to look at animals for a long period of time. If I could just give you an example of elephant behavior. A research scientist, Holly Dublin, who was studying elephants for many years, had to watch an elephant for a whole year before she saw one incident of what looked like self-medication. So, that's the main problem.

The other problem is that only 15 percent of plants on the planet have actually been analyzed in any detail chemically for their medicinal compounds and so on. And so most of what we see wild animals eating, we don't know what they're eating. (Laughs) So we have no idea whether they're eating something medicinal or not.

TOOMEY: Most everything that we've ever thought about that sets us apart from the animal world has really been shot down: tool making, emotions, so on. And you write that this idea of animals medicating themselves touches a nerve. And I'm wondering, is that because this is just one more example of how thin that dividing line is between us and them?

ENGEL: I think it could be. But I think it's slightly worse for the idea of animal self-medication, because it has all these links to herbalism, and herbalism is linked to pre-scientific era-- especially in Europe, it's linked to witchcraft and old wivesí tales and so on. And so it's kind of even more anathema to scientists than, say, tool making. It has greater links to the thing that worries scientists most, which is anthropomorphizing animals.

TOOMEY: So, Professor Engel, what can we learn from "Wild Health"?

ENGEL: I think one of the most important things we can learn is to take back some of the responsibility for our own health and to pay more attention to how we feel on a day-to-day basis. I mean, what we're tending to do is to ignore our health until we're actually ill, and then go to an expert and try and buy something that's going to make us better, which is not what we're seeing in the wild. For animals medicine is something they do, whereas for humans medicine is something we buy from experts. And I think that's probably the biggest lesson we can learn.

TOOMEY: Professor Engel, thanks for joining us today.

ENGEL: Thank you very much.

CURWOOD: Cindy Engel, a professor of environmental sciences at Open University in Suffolk, England, and author of the book "Wild Health: How Animals Keep Themselves Well and What We Can Learn From Them." She spoke with Living on Earth's Diane Toomey.