CURWOOD: As people have sprawled out from the cities of the mountainous western states, the rural flavor of the region has begun to decline. Ranches and wild land have given way to ranchettes, too small to provide a livelihood. One place that's escaped so far is a little known part of mountainous California where you find old growth trees with trunks eight feet around. Robin White reports that, even there, the pressure is on, as a ski resort reinvents itself to compete with Vail and Aspen.

WHITE: There's a little piece of California that people say shouldn't be in California at all, because it's more like Nevada. To get there from the coast you have to drive hundreds of miles, around to the eastern side of the Sierra Mountains, and in winter, when snow is lying thick in the passes, it can take six to ten hours to get there. When you arrive, there's not much there -- it's a high desert. But one place that people go is the ski resort of Mammoth.

Up in a ski lift, in sideways-driving snow, with snowboarders down below on the slopes, Rusty Gregory, the CEO of Mammoth Mountain, is showing off some of the improvements at the resort.

GREGORY: This is McCoy Station, used to be mid-Chalet, and we put $5 million into it this year and completely refurbished it, and it's about 100,000 square feet here, up on the mountain. Weather's very severe here, as you can see, so we built it in a way that sheltered people from the elements. 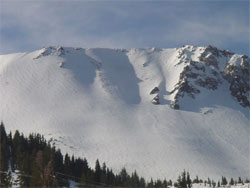 WHITE: He's pointing to a chalet, which is named for his boss, Dave McCoy. McCoy started the ski resort in 1937. He was a ranger, and he began pulling skiers up the hill using the winch on his forest service pick-up truck. These days Mammoth is trying to lose an image as a down-home destination with shag carpets and rotting A-frames. It's spending millions to create an upscale ski village and this high-class mountain restaurant we're looking at.

GREGORY: It's not as hearty as back in the days when Dave McCoy was starting up. He'd have a campfire and cook during their day of skiing. So, nowadays, the quality of the food and the ambiance is very important, you know?

WHITE: Back in his office, Gregory says developing Mammoth is all about stabilizing the local economy. The mountain town is surrounded by public land and it doesn't have the opportunity to grow. And it's trying to increase income in other ways. A few years ago the ski resort took the plunge and they bought snowmaking machines.

GREGORY: Snowmaking has been a real godsend in terms of the feast and famine nature of the town. Back in 1990-91, Mammoth came very close to being taken over by our banks because we had the third or fourth year in a row of very limited snow and, that year, no snow for Christmas. And when we don't have snow on Christmas, it's a very, very difficult time.

WHITE: But, to make snow, you need water, and here, to get water, you need to pump. A plan for new wells close to the Owens River, north of Mammoth, has made environmentalists and local people angry. Some of them depend on a different kind of tourist economy. Within sight of the ski slopes but 2,000 feet below, the land flattens out and the desert takes over. And out there is an arid meadow and in the meadow a series of ponds, and the ponds seem to boil with a kind of barracuda-like frenzy.

WHITE: Tim Alpers is hurling pellets to feed the trophy trout he raises.

ALPERS: These fish range anywhere from two to ten pounds in here, and these are the Alpers trout.

WHITE: The Alpers family's been here since the days when the only skiers were mailmen, crossing the mountains on wooden skis to deliver letters. And Tim's been fish farming here for 31 years.

ALPERS: These are the trout that I stock from this natural wilderness hatchery here, out into all the lakes and a good number of streams in Inyo and Mono Counties. This is what propels the summer fishing economy up here.

WHITE: Tim Alpers is worried that if Mammoth pumps water out of the ground to make snow, it could affect the flow in the Owens River. And that might disturb the trout that come upstream to spawn in the shallow gravels near his land.

ALPERS: All trout need clean, clear cold water for them to survive and reproduce. So we think it's a very delicate system up here, and losing a substantial percentage of that water, we think, could just be devastating to the fishery there.

WHITE: This is more than just a conflict about water; it's a battle over the soul of this place. For a century and a half this has been a kind of rustic old west backwater, full of rodeos and hiking, fishing, and old men who will sit you down and tell you their hunting stories. At home, in a place called Round Valley, a few miles from Mammoth, resident Bruce Klein remembers the deer herd that used to roam here.

KLEIN: When I was a kid and we'd visit here with my grandfather, in the fifties, the Round Valley deer herd, he said, was the equivalent of an event on the Serengeti. This was the winter range for a huge section of deer that came out of the Sierra and would winter here. And perhaps as many as 10,000, perhaps more. Ten thousand deer. That's a staggering number of deer.

WHITE: The deer herd numbers dropped to as low as 800 in the 1980's, because of drought, and now they've come back to about 2,000. But Mammoth's plans call for an expansion of the local airport. At the moment, the airport's just a gravel strip with some sheds and a windsock. The deer pass right through here on their 100-mile migration. But soon, the airport might be handling jets with up to 7,000 flights a year. To make it safe for jets the plans call for fencing the runway, and that might force the deer onto the nearby Highway 395. The airport could change, once and for all, the rural feel of the place, and Tim Alpers says the people who come are just different.

ALPERS: We're seeing a tremendous movement, in the development of Mammoth, a lot of irrigation for golf courses, a lot of projects that have landscaping, a lot of snowmaking. The public that comes up to use these recreation areas now are basically very high-maintenance and they have a high expectation level. And to satisfy high expectations it takes a lot of resource usage.

WHITE: And, in this particular corner of the west, where resources are limited, that means that somebody else has to do without. Not everyone agrees that that's a bad thing. In the nearby town of Bishop, on one side of the street you have Uncle Bill's barbershop, where you can get the fishing report along with your haircut; and across the way, it's the dark and funky Kava Cafe, full of a new generation of skiers and rock climbers and people huddled over laptops. Greg Positery is helping out behind the counter.

POSITERY: I think growth is wonderful for the area. It's been a secret for many years. If people want to come out and enjoy it, they can. And it's going to cost, but it's worth it.

WHITE: And, for some people, it's very worth it. Positery made $100,000 profit recently, when he sold his house in Mammouth. Investment by the ski resort has helped Mammoth house prices almost quadruple in two years.

POSITERY: People just have trouble changing, and that's all it is, it's an area that's going through a change. And people become complacent with the normalcy of what is now and can't project to what could be, as far as progress or future.

WHITE: But a lot of people moved here to the eastern Sierra to get away, perhaps even from change itself. And that's leading local residents to join with environmentalists in a push to designate a section of land right next to Mammouth as federal wilderness. This would protect the area from ever having expanded ski runs. Bruce Klein doesn't like the push to make the land wilderness but he does agree that natural values should come before everything else.

KLEIN: Isn't it up to us, as a community, as caring human beings, to, whatever we're doing, so what. Let's set it aside and take care of the wildlife. I mean, isn't that why we're here? Isn't that part of our identity as people with a connection to the environment?

WHITE: Just to show, though, how interwoven the community is, Klein's wife works as a nurse in Mammoth, and Klein himself wants to be a consultant in the adaptive ski school at the resort. In a poor rural economy like this there are not many choices about how to make a living and the possibility of doing well working for an international ski destination is a lure hard to resist. For Living on Earth, I'm Robin White, in Mammoth Lakes, California.

CURWOOD: And you're listening to NPR's Living on Earth.