For thousands of years, people have put camels to use as beast of burden and transportation. Now, from the Negev Desert, comes another use for the animals. And this one might surprise you.

CURWOOD: The camel is perfectly suited to the desert, with its legendary ability to go long distances and periods without water and its anatomy adapted to the sand. But as Sarah Zebaida tells us, the camels of Israel's Negev are finding new admirers of their talents in the desert or, perhaps I should say, dessert.

ZEBAIDA: Reuven Yagil is both a veterinarian and a professor of human physiology. And he's used his expertise in both those fields to make and market a most unusual product: camel milk ice cream. 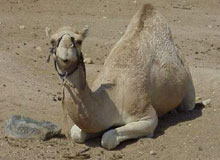 YAGIL: When I finished veterinary medicine, in Holland, I joined what was then the Negev Institute for Arid Zone research, which was supposed to find food alternatives in the desert. I thought maybe we could learn from the camel something that would help us breed a better cow or something else, which I soon saw was untrue. And then I saw it was an untapped source of food. Of course, we had forgotten that camels were originally domesticated, for their milk, so I started to look into milk and the milk production, and the more I looked the more I was astounded that we were not tapping this source and not using it.

ZEBAIDA: This is the International Camel Center, which Yagil founded nearly ten years ago. It's in the heart of Israel's Negev Desert, a remarkably arid region of craters and mountains and 120 degree summer temperatures. The herd of 140 camels provides the milk for Yagil's ice cream. But the Ben-Gurion University professor had to fend off skeptics for nearly two decades before he could establish his business.

ZEBAIDA: But the skeptics turned out to be wrong. The camels here seem content. Each has been given her own name and is free to roam inside the two spacious paddocks. And Yagil's business is booming. His trade name for his ice cream is Gamalida, a word that comes from the Hebrew for ice cream, glida, put together with a word for camel, which is gamal. Orders for cherry, date, fig, mango and melon flavored gamalida have come from as far away as Japan. Contrary to the skeptics' estimate, a healthy camel can produce a phenomenal 26 quarts of milk every day, even if it hasn't drunk a drop of water for two weeks. That's about 20 times more milk than a cow would be able to produce in a similar climate.

Clara van Crevald is one of the three partners in the business, and maintains her impressive biceps by milking twice a day. Milking camels is a two-person job on this farm. The camels spend less time being milked, and four hands quickly fill up the buckets.

VAN CREVALD: Now, the milking itself is not a strain; it's - I love doing it. People that say that camels are smelly, I think they don't know what they are talking about. If you compare the camel to milking a cow, you stand up to your knees in their droppings. Well, the camels are completely dry. They have a smell, but it's the smell of the animal, it's not the smell of the droppings. And working there, at the back of the animal, is no problem.

ZEBAIDA: Van Crevald says if the camel is content, it will stand patiently for its milking. But if a camel is cross, it does have a list of tricks to perform for her.

VAN CREVALD: They can kick, and it hurts. If they really want to upset you, they can not spit but give up. Some people think that camels spit, but they don't spit like the llama. They just give up their food. And, because they're ruminants and it has been in their stomach, it's smelly. They won't really bite. In all the years I've been working, I saw one camel biting, not me, somebody else.

ZEBAIDA: After almost an hour in desert heat, I was ready for a taste of the finished product. Clara van Crevald tempted me into the ice-cream parlor of the Dromedairy.

VAN CREVALD: The very favorite is date ice cream, but then I have cherry and vanilla and chocolate and mocha and, for Rosh Hashanah, for the Jewish New Year, I make apple and honey ice cream.

ZEBAIDA: Which one is this one, over here?

ZEBAIDA: Well, it looks just like ice cream. It looks lovely and luscious, with apple bits in it. That's just fine, that really doesn't taste like camels at all.

ZEBAIDA: After my visit to the ice cream parlor, I scoured the Negev Desert for an opinion from the most discerning ice cream connoisseurs.

ZEBAIDA: But camel milk products aren't for everyone's palettes in Israel. There's disagreement in the religious Jewish population as to whether camel's milk is kosher. Again, Reuven Yagil.

YAGIL: According to a story of the religious Jews that come from North Africa and the Middle East, they say it was in order to separate the Jews from their neighbors. So they said, you cannot eat the camel, but they never ever said you could not drink the milk, because it was the only source of milk available to them. Well now, it depends on who you speak to. If it's the rabbis that come from the Sepharadim that's from Africa, a lot of them even drink milk here, and they say, yes, it is kosher. The Ashkenazi rabbis, that means coming from Europe, they say, no, if you cannot eat the camel, you cannot drink the milk.

ZEBAIDA: For the majority of Israelis, camel milk ice cream comes guilt-free. It's very high in protein and low in fat, and the camel fat is laden with a healthy type of essential fatty acids. And it doesn't seem to produce a reaction in people with allergies to dairy products. But camel milk and its ice cream have other benefits. Guftan Abu Rakaik is a native Bedouin nomad from the Negev Desert and divides his life between his two wives. Guftan says Bedouins have sworn by the legendary camel milk for centuries.

VOICEOVER: They say that anyone who does not use camel milk will have all sorts of illnesses and problems. In Bedouin tradition, we are allowed to have three and even four wives, but if a man can't marry a young woman because he does not have the strength, he goes to find some camel milk. This is because it fills you with male potency and virility.

ZEBAIDA: Soon, there may be more camel's milk products to choose from. Because of its non-allergic property, a human infant formula is said to be in development, and Australia, Kazakhstan and Mauritania have sent delegations to the International Camel Center to learn how to put their own camel populations to better use. For Living on Earth, I'm Sarah Zebaida, in the Negev Desert, Israel.