Buffalo for the Broken Heart

The Great Plains used to be a land where buffalo were free to roam. Now, there are only scattered bands across that landscape. Host Steve Curwood talks with Dan O’Brien, author of the book Buffalo for the Broken Heart: Restoring Life to a Black Hills Ranch, about the wild animals that restored his ranch, and his life.

CURWOOD: It's Living on Earth. I'm Steve Curwood. Since the last days of the Wild West, the Great Plains have been known as cattle country, but long before ranchers put cows to pasture there, the plains ran wild with buffalo. During the late 1860s, 60 million buffalo were hunted and killed for their flesh and hides, or simply for the thrill. By 1875 only scattered herds of the animals remained. Now about 75 ranchers throughout the Northern Great Plains are trying to bring the buffalo back. Dan O'Brien is one of them. He raises buffalo in the Black Hills of South Dakota. And he's author of the book, "Buffalo For the Broken Heart: Restoring Life to a Black Hills Ranch." Dan, welcome to Living on Earth.

O'BRIEN: Thanks, Steve, it's good to be here. 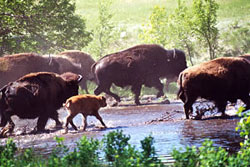 CURWOOD: First of all, what brought you to the Black Hills?

O'BRIEN: I came to the Black Hills probably 28 years ago, to get out of graduate school, and I think what I needed at that time was to get away from all that crunch of industry. I was from the rust belt. It was within weeks of Kent State. I wanted to get away from all of that turmoil. And I came out here, and when I hit the Great Plains and was able to look around and could see the possibility for solitude and to build a life, an honorable life, it took. And I've been here ever since.

CURWOOD: You have to explain to us what the title of your book means. I mean, what do you mean, buffalo for the broken heart?

CURWOOD: Dan O'Brien, there's a passage in your book where you describe one of your first encounters with the buffalo of the Black Hills. Could you read a little from this, please?

O'BRIEN: Sure, I'd be glad to: "Trying to make a life as a cattle rancher in the economy of the Great Plains makes for a lot of driving, and one afternoon a dozen Septembers ago it led me to a remote dirt road along the southern boundary of Bad Lands National Monument. I was thinking about the mortgage payment that would come due in October and the recent, inexplicable dip in cattle prices that would cut my income in half. I drove too fast, and, when I came over a dusty rise, I nearly ran into an enormous bull buffalo. He reclined luxuriously in the center of the dirt road, stretched out in the sun like a 2,000 pound tom cat. By the time I'd braked, I'd gotten way too close and was struggling to get the gear shift into reverse, when he raised his head and looked straight into my eyes. We stared at each other for perhaps a minute, and for that minute all my business worries were dwarfed by this dose of reality lying in the road ahead. Leisurely, the head dipped and the legs pulled under the great beast. The short, paintbrush tail whipped in the dust and the bull rocked once, twice, and up onto his feet. He shook like a dog, creating a cloud of dry South Dakota soil that drifted away in the cooling evening breeze. He took one last look at me before he moved off the road, into a nearby draw, and out of sight."

CURWOOD: And somewhere between that first encounter and now, you changed hats, from being a cattle rancher to a buffalo rancher, farmer, herder? What changed your course, and why buffalo?

O'BRIEN: I've always been a fella that likes the wild, and there was something about cattle that always made me a little bit uneasy, because they are so tame. There's a myth about cattle. That myth is that it's a tradition that reaches back almost to the beginning of time in some people's mind. In fact, the tradition of cattle is only probably 80 years old. Cattle grazing is an experiment that has not panned out very well on the Great Plains. And, as a result, our communities have been dying ever since that great experiment started, 80 years ago. And when I finally put together the economics for using my grazing land to raise buffalo, and how to do it in a wild way, there was no stopping me. I was not satisfied with tame, old Hereford cows anymore.

CURWOOD: If I were to come out the front door of your house, what would I see? And how big is your place?

O'BRIEN: Well, my place is 1700 acres, and, when you stop out the front door of my house you see Bear Butte, off to the southeast about six miles, it's a sacred site for the Sioux, and you see the Black Hills, another three or four miles straight south.

CURWOOD: You have 1700 acres but, how does the song go, buffalo like to roam? How do you fence those guys in?

O'BRIEN: It turns out that buffalo are not some crazy animal that crashes around into things, but I didn't know that at the time. I built five wire fences and built about eight miles of that around my place. And I have found that they actually do not test the fence. If they have enough grass where they are, if they have enough pasture where they are, they don't want to roam. They only roam when they need to, but, when they need to, they do go.

CURWOOD: If you take the ecological lens to look at cattle as livestock or buffalo as livestock there in the Northern Great Plains, what do you come up with?

O'BRIEN: Just because cattle and buffalo look a lot alike, doesn't mean that they're treating the land the same way. Now, on my place, for instance, 50 years of cattle or thereabouts has really stressed native plants, and, by putting buffalo back on the plains, some of those native plants are definitely starting to come back.

CURWOOD: How do you prepare these buffalo for market? I mean, to cut to the chase, how do you slaughter them?

O'BRIEN: We have gone to great lengths to get inspection of our meat where we can kill the buffalo in the field. What we do is let the animals grow to two years old, and then we go out and try to randomly select our group for slaughter, and we shoot them right there, right out of the herd, the same herd they've been with their whole life. There's no ramming them into trucks and trailers and hauling them off to a slaughter plant where they're killed full of adrenaline and fear. They just lay down and go back to the ground that they've lived on their whole lives. And, it's a distasteful part of the job, but it is a part of the job, and I like to believe the same way that my Lakota friends believe, that if you do these sorts of things with honor, that the buffalo does not take offense.

CURWOOD: In one part of your book you quote some lyrics from a Jerry Jeff Walker tune called "Night Rider's Lament." Perhaps you could quote from that, or at least a piece of it, right now.

O'BRIEN: Well, I think I can remember: "They asked me why do I ride for my money, why do I rope for short pay? I ain't getting nowhere and I'm losing my share. They say I must have gone crazy out there."

CURWOOD: So, what strikes you about those words?

O'BRIEN: I have friends, of course, all over the country, and they really do wonder what I'm doing out here without a television and without any movie theatre to go to, or symphony or any of that sort of thing. And it strikes me that there is something intrinsic in us all, certainly in the Jerry Jeff Walker song, that leads me to believe that everybody needs a little bit of that open space, and everybody needs a little bit of what I've got. And that, finally, in the balance, I'm not deprived at all. Perhaps I might even be the lucky one.

CURWOOD: Dan O'Brien is author of the book "Buffalo For the Broken Heart: Restoring Life to a Black Hills Ranch." Dan, thanks so much for taking this time to talk with me.

O'BRIEN: You bet. Thank you, Steve.