The entire northeast is in the grips of a severe drought. And even though Maine is chock full of rivers and lakes, it’s been one of the hardest hit states. Maine Public Radio’s Naomi Schalit reports.

CURWOOD: Welcome to Living on Earth. I'm Steve Curwood. For folks in the West, drought is a familiar and unwelcome part of the environment. Now, for the first time since record books have been kept, some parts of the East are getting a taste of what the weather analysts call "extreme drought." The current dry spell is parching communities all along the East Coast, with some regions of Maine particularly hard-hit. It's a down home problem Down East. Well after well is drying up. Maine Public Radio's Naomi Schalit reports.

ADAMS: We just hit bedrock. We're down 188 feet. Now we'll drill in the bedrock a ways, and get ready to set our casings.

SCHALIT: John Adams has been at this rural Maine residence in Leeds for about four hours. His drilling rig is capable of boring down 1500 feet in search of water, which is what the owner of this home needs. She's one of a number of residents in this neighborhood whose wells have gone dry in Maine's worst drought in recorded history.

About 40 percent of Maine's residents are on private wells. And the failure rate of those wells has skyrocketed since last summer. Requests for new wells are flooding drilling companies. And some are backed up until July. One driller described the situation as his worst nightmare. Adam's co-worker, Pete Johnson, sums it up in classic Maine understatement.

SCHALIT: Just next door, neighbor Wesley Stevens is out a chunk of change after having drilled a new well a few weeks ago.

STEVENS: We were running low on water. We were getting low, and started doing laundry out in Winthrop. And I got sick of that, so I called up my money man, and told him I wanted $5000 out of my bank. The house over there, their water came back a little bit. And the house there, they've gone to Florida. But they're holding about four feet. Mine went down about two, two and a half feet, something like that.

SCHALIT: But folks like Stevens and his neighbor are lucky. They've got the money to drill new wells. And there's federal money to help low-income homeowners pay for their new wells. But many Mainers are not able to come up with the four to seven thousand dollars needed to drill a new well. So they're trying other creative ways to get water. And that's got state officials worried.

SCHALIT: This is the sound of, at least, temporary relief for Jefferson resident Joan DePalmer and her husband. The water being pumped into their well was hauled here from the public water supply of another town that hasn't been as hard-hit by the drought.

DEPALMER: Just ran out. Just went to put on the water to do some dishes, and there was nothing there three days ago. It's just so dry. The ground is so dry. It's just taking everything.

SCHALIT: Unlike the high cost of drilling a new well, this delivery costs $200. And since it's from a municipal supply, this water has been tested as safe. But in other instances, that's not the case. For example, local fire departments are playing good samaritan by offering to bring water from their fire fighting ponds to fill wells that have gone dry, a prospect that's got Haig Brochu quaking in his boots. Brochu is an environmental specialist with the state's drinking water program.

BROCHU: Especially with surface water, you could really get into some serious problems because there are things like cryptosporidia and giardia. Giardia is a type of critter with, once you get it, there's no getting rid of it. You've got it forever. It takes up residence in your stomach, and in your intestinal track. So, I guess there are many, many. You wouldn't even begin to compile how many different types of bacteria there are out there which could cause significant health effects with people.

SCHALIT: Also, there could be solvents, gasoline and oil, present in the water. And once these contaminants are in your aquifer, he says they may be impossible to get out. You could end up contaminating your water supply and your neighbors. But in cases of severe drought like this one, bacterial contamination is generated from inside aquifers as well. Again, Haig Brochu.

BROCHU: We're at the point where the bedrock has been dewatered so much that oxygen, or the presence of air, is now down underground in places where it wasn't typically there. So you've created an environment down underground which promotes the growth of bacteria and all these little creepy crawly things.

SCHALIT: State officials are stymied about how to deal with this evolving disaster. Some of them joke about doing rain dances. Others have unsuccessfully tried to convince out-of-state well-drillers to come to Maine. While others have been frantically looking for obscure sources of money to help homeowners pay for new wells.

Art Cleaves heads Maine's Emergency Management Agency. He also co-chairs the state's drought task force. He says the problems created by the water shortage are enough to make him wish for a disaster that's easier to deal with, like a good old-fashioned hurricane.

CLEAVES: There is not a good solution to a drought. And there's no immediate cavalry that can be turned to that comes in and rescues folks. There's no good recovery methods. There is a limited number of well-drilling rigs available. It's also a little bit more scientific than just removing debris, and moving through a normal disaster.

SCHALIT: Officials are drawing up contingency plans in case of widespread well failures. For instance, when individual wells fail, towns may still have intact municipal sources of water. So there are schemes to make public buildings available for showers. Local disaster officials are also imagining more dire scenarios, like the failure of school and hospital water systems. But Cleaves cautions that it's going to be hard to help everyone.

CLEAVES: We can't come to the rescue with a well-drilling rig tomorrow. The best that we can hope to do is bring tankers of water in. And those are not quickly and readily available. But that would also take a declaration at the national level in order to get those resources here. The Army National Guard possesses some trailers that we could do on a limited basis. And then, during freezing weather, it's not easy to place a tanker just somewhere, and let people draw water from it. 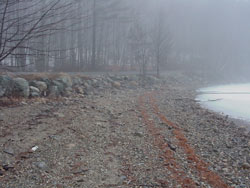 SCHALIT: Even if the precipitation gods smiled on Maine today, says Cleaves, it would take a long time to make up for the cumulative water deficit. Scientists say that it would take at least six months of above-normal snow and rainfall to recover. And the National Weather Service predicts that's just not going to happen. Governor Angus King could request a disaster declaration from the president, freeing up federal funds. But the feds have never granted one for a drought emergency...yet. And while some towns have instituted either voluntary or mandatory conservation measures, there's been little push on the state level to do anything comprehensive to force conservation.

[SOUND OF WELL BEING DRILLED]

SCHALIT: In the end, says Leeds resident, Wesley Stevens, Mainers are mostly on their own as they face this water shortage.

STEVENS: Keep hopes up -- that's all -- if you don't have somebody that has money enough to have a well drilled.