The vast majority of outdated computers that Americans send off for recycling end up as hazardous waste in Asia. Host Steve Curwood talks with Jim Puckett of the Basel Action Network about the dubious legality of this international trade.

CURWOOD: Most of the computers disposed of in the United States wind up being scavenged overseas. And a new report from the Silicon Valley Toxics Coalition, and the Basel Action Network, says, "Our high-tech waste is dismantled in low-tech, environmentally dangerous ways."

Jim Puckett, of the Basel Action Network, recently visited one such illegal recycling center in China. He says more than a hundred thousand people at this site process e-waste 24 hours a day. 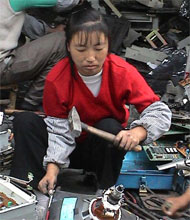 Woman about to smash a cathode ray tube
from a computer monitor in order to remove
the copper laden yoke at the end
of the funnel. Guiyu, China.
(Photo: Basel Action Network)

PUCKETT: We saw whole villages of women and children, men, of course. Their entire livelihood is made up of sorting wires that have been pulled out of computers in the town. They're sorted by day, and burned at night. When you burn these type of wires, you're burning brominated flame retardants. You're burning PVC, which will instantly make dioxin, and also polycyclic aromatic hydrocarbons, which are also cancer causing. So, it's quite an ugly scene. The computer monitors themselves, which everyone knows now, I hope, have lead in them. These were just being cracked to pull off a copper yoke off the back to get about 20 cents worth of copper. Circuit boards, they go to these women and girls who, all day long, over hot plates, will slap them down and cook them until the solder melts, and they're breathing in the lead tin solder. They pull the chips off. Some of those will go to be reused in what they'll call "new computers." But, the vast majority will go to a new cyber-age gold mining operation.


And basically, what they're doing is using a very primitive process, nitric acid and hydrochloric acid to dissolve the very small amounts of gold in the chips. The sludges from this process go right into the river. And they're breathing the gasses from this process constantly. There's no protective equipment for their lungs. They're breathing it in all day long, and all night long. This is a full-time, 24-hour operation we observed. 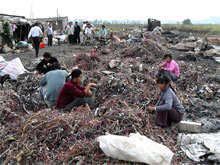 CURWOOD: Jim, how legal is this trade in high-tech waste?

PUCKETT: Well, this is the really distressing thing, is that the United States is one of the very few countries of the world that has not ratified the Basel Convention. And this is a treaty that was a United Nations treaty to resolve this problem of trans-boundary movement of hazardous waste. The United States government has done more than just ignore this problem. They have made it quite easy. And, you talk with the folks at the EPA. They actually say we're happy to have this offshore market. Otherwise, we would never be collecting so many computers. They would all go and poison our own land, and our own soil.

CURWOOD: So, what should a conscientious recycler do here in the United States? If I upgrade to a new computer, what should I do with the old one?

PUCKETT: What I would do, right now, is hang on to it. We're going to ask certain recyclers to sign up on a platform that they guarantee no export; they guarantee that they won't sell to brokers that export. And we will post those. And consumers can then find a viable place to take their old, obsolete computer. But ultimately, the problem has got to solved upstream at the manufacturing design position. We've got to get the poisons out to begin with. They're going to cause a problem no matter what. And, I'm afraid that's going to take a mandate.

CURWOOD: Jim Puckett is a coordinator of the Basel Action Network. Thanks for your time, Mr. Puckett.