The Search for the Ivory-billed Woodpecker, Part 1

Despite the accepted belief among most biologists that the Ivory-billed Woodpecker is extinct, avid bird enthusiasts continue to search for the species among southern U.S. swamps and bogs. In this documentary report produced by Brenda Tremblay, we visit with hopeful birdwatchers searching for their aviary Holy Grail.

CURWOOD: Welcome to Living on Earth. I'm Steve Curwood. In a few weeks, ornithologists will learn if they're any closer to finding a bird that most people believe is extinct. The Ivory-billed Woodpecker was thought to have disappeared from its swamp habitat in the southeastern U.S. during the 1980s. But, in April of 1999, a forestry student reported seeing a pair of the birds in Louisiana. His account was credible enough that, this year, an elite bird watching team began a special search. They traveled by foot and canoe in the Louisiana Pearl River Wildlife Area. They say nothing definitive. But the team did record some sounds that may have been made by an Ivory-bill. We'll speak with the scientists who's analyzing those recordings a little later in the program, but first, let's hear a documentary about the Ivory-billed Woodpecker that Brenda Tremblay produced for us a few years ago. Brenda traveled to Mississippi's Delta National Forest, as part of her own quest for the Ivory-bill and to explore the culture of birders who've made it their holy grail.
[MUSIC: Coyote Oldman, "Rolling Earth," (LIMEWIRE)]

TREMBLAY: I hardly know where to begin this story. A story that's part fable, part science lesson, and part obsession. I suppose it began when I first saw a picture of a bird in a book. The picture got into my head. I couldn't stop thinking about it. I even dreamed about it. Months went by and I was still fixed by its image. Finally, I decided to drive to Mississippi to look for it.

ALEXANDER: Were there any pelicans in Mississippi?

HEYEN: I cannot find my daily bread for sale in this beribboned mall thronged with the polymer sound of generic birds on plastic limbs, in plastic trees. I need to fathom what I'll need to buy. 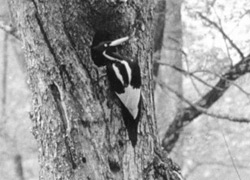 JAMES: Like all other groups of birds that are endangered and becoming extinct, it's always the largest one that's most endangered, like the Whooping Crane, the largest crane; the Trumpeter Swan, the largest swan; the Ivory-billed Woodpecker, the largest woodpecker.

BUDNEY: The Ivory-billed Woodpecker was probably not a bird that was following such a narrow path that it was doomed to extinction. In all likelihood, it has to do with human manipulation of the habitat.

TURCOTT: Well, you know what the holy grail is, don't you? It's when you go out seeking something that's maybe not possible or not there but you still go out to see if it's possible.

TREMBLAY: Highway 82 passes by the fast food joints, cheap motels and corrugated metal buildings of Greenville, Mississippi, and through the fertile cotton and soybean fields of the Mississippi Delta. It's another 20 miles to the Delta National Forest. Here I met Jerry Jackson, a professor of biological sciences at Mississippi State University. For years, Jackson has been searching the southeastern United States for what he and others call the "Lord God bird."

JACKSON: And it's the Lord God bird, I'm sure, because when people would see the woodpecker they would say, "Lord God, what a woodpecker," and that's referring to its size. It's an incredibly large bird. It's a woodpecker with a three foot wingspan, the size of a crow or slightly larger.

TREMBLAY: The Ivory-billed Woodpecker is, or perhaps was, a magnificent bird, but not in the same way that a large hawk or eagle is magnificent. The Ivory-bill has a prehistoric aspect. It's pterodactyl-shaped, other-worldly, with a stark color combination of red, black and white, and light colored eyes. It is an unforgettable image that keeps people searching, despite the odds.

JACKSON: There are some real fanatics out there that are really so, so anxious to find an Ivory-billed Woodpecker. There's a young doctor, who is now stationed in Hawaii, who came to my office and spent some time with me, who has all of the literature on Ivory-billed Woodpeckers, who knows everything there is to know about them, and who's continually looking for them. There's a lawyer in Texas who put up a bounty of $1000 and plastered placards advertising his willingness to pay $1000 for evidence that there are Ivory-billed Woodpeckers. There are people out there who are very serious in their intent to find Ivory-bills and who are very serious when they say that they think that they exist.

TREMBLAY: The Mississippi Ornithological Society meets every few months to look for birds and commune over catfish dinner. The Ivory-billed Woodpecker was crossed off their lists a long time ago, but there are some old-timers in the group who remember the days of rare sightings and still tell stories of tantalizing encounters. Bill Turcott used to work for the Fish and Wildlife Service.

TURCOTT: The place was teeming with woodpeckers, a lot of Pileateds in there. Of course, we never saw anything we considered an Ivory-bill. We're on the last day of the second trip that we made up there. I pulled off of this road that borders the lower part of the bluff, at a little overlook overlooking the swamp out there, and I got out and played the Ivory-billed tape one more time. I was sitting there, feet on the ground, the car door open, and Al was up behind me here, and I swear I heard, twice, the Ivory-bill call. Twice, just as plain as day. And I stood up and looked back and hear this Barn Owl that I called out of this big cottonwood there on the bluff, come cross there with three Bluejays behind it. Well, a Bluejay can imitate just about anything he wants to imitate. And I heard what I considered to be Bluejays making that call, because there was no possibility there was an Ivory-bill on the other side, because at the top of the bluff it was open pasture.

TREMBLAY: There is only one recording of the ivory-billed woodpecker, made in the 1930s. It was made in the Singer tract, an 80,000-acre tract of hardwood forest in north-central Louisiana. Greg Budney is the curator of the Library of Natural Sounds at Cornell University's Lab of Ornithology, in Ithaca, New York.

BUDNEY: They realized in 1935 that the Ivory-billed Woodpecker was likely to become extinct; that numbers of birds were very low, and they wanted to make sure that its voice was documented. It was a joint expedition between Cornell, the American Museum, and, I believe, it was funded by the National Geographic Society.

BUDNEY: I would just say, how lucky they were, Arthur Allen, James Tanner, Peter Paul Kellogg had the foresight to record this animal, to go to the lengths that they went to record the Ivory-billed Woodpecker. What a great thing to be able to hear. For me, nothing like sound takes you back to a place or a time. It's essentially unreduced in dimension. We're listening to what they listened to. And that's exciting, and helps communicate to us what the loss of a creature like an Ivory-billed Woodpecker is, as we sit and listen to that recording and think that if we walked through the swamps of the south, we're not going to hear that again, in all likelihood.

BUDNEY: Following the Civil War, much of the lands of the southeast reverted to federal ownership, simply because the people of the south were so poor that they couldn't afford to pay the taxes on the lands. By the late 1870s, early 1880s, this had grown to crisis proportions, and southern senators and representatives were lobbying in Congress trying to get those federal lands sold, so that the lands could go back on the tax base. So the lands were sold, and they went to the lumber companies of the north. Special railroads were built, going out of Chicago, coming to the south to bring land buyers to the south. And the virgin pine forests of the southeast sold for a dollar and a quarter an acre.

TREMBLAY: Nobody knows all the reasons why the bird has disappeared. By the time scientists began to study causes of its decline, there were hardly enough birds left to research.

TREMBLAY: In 1935, ornithologist James Tanner began a study of the few Ivory-bills left in the Singer tract.

BUDNY: But then, World War II broke out, and during a war, if something is being done in our national interest, then it has to be okay. And we needed timber, we needed wood for pallets to put the shells on that were being shipped overseas. And the Singer tract in Louisiana, owned by the Chicago Mill and Lumber Company, was a tract of forest that, as far as those lumbermen were concerned, needed to be cut for the war effort. It was the patriotic thing to do. Unfortunately, that was where the last of the Ivory-billed Woodpeckers lived. But we couldn't be concerned about them. There was a war going on.

TREMBLAY: For more than 30 years after the war, people searched for and fantasized about finding the Ivory-billed Woodpecker in the remote swamps of the United States. In 1969, two amateur naturalists claimed to have seen Ivory-bills in central Florida. Ornithologists who investigated their claim found nothing. On March 14th, 1971, a member of the Audobon Society played the tape recording of Ivory Billed Woodpeckers and heard a response, in the Santee Swamp of South Carolina. No one saw the bird there either. Six months later, Dr. George Lowry, Jr., a well-respected ornithologist, reported that a birdwatcher in Louisiana had photographed Ivory-billed Woodpeckers in May of 1971. Lowry believed the photographs were authentic, but no birds were ever found. They were seen in Cuba, in the 1980s. Lured by the possibility of photographing the last Ivory-bills left, the National Geographic Society hired Jerry Jackson to lead an expedition there, where Jackson thinks he caught a glimpse.

JACKSON: Well, I can tell you the minute, it was 9:32 a.m. in the morning, on March 4th, 1988. How's that for being excited about it? I had spotted this place, on the first day that I was there, that I could overlook and see some dead trees that looked like they had woodpecker work, and I thought, that's where we're going to see them. And I went back to that spot, it was about three weeks later, and I was sitting there, early in the morning, and had my 400 millimeter lens focused on the dead trees about 300 feet in front of me, and this woodpecker, or what I believe was the Ivory-bill, flew past, 30 feet in front of me, and it was zip, right by, it was gone.

CURWOOD: Our search for the Ivory-billed Woodpecker continues right after this short break. You're listening to Living on Earth.