Biodiesel is a non-toxic, renewable fuel that can be used in diesel engines. The fuel is made from vegetable oil and creates less pollution than fossil fuels. But as Maine Public Radio’s Charlotte Renner reports, it might take some tax breaks, or other incentives, before biodiesel finds a broad audience.

CURWOOD: In 1893, when Rudolf Diesel invented the engine that bears his name, he envisioned a fuel made from vegetable oil. The German inventor hoped to replace what was then the dominant power source for mechanized transportation, coal-fired steam. When cheap petroleum hit the market in the early 20th century, so-called biodiesel took a distant backseat. Supporters of this non-toxic renewable fuel are hoping to bring it back in the forefront as air quality standards kick in over the next several years. But as Maine Public Radio’s Charlotte Renner reports, right now, it's a lot easier to make biodiesel than to sell it at a profit.

RENNER: Biodiesel has been used extensively in Europe for over 20 years. But in the United States, it's still a rare commodity at the pump. So Peter Arnold, an environmental educator in Wiscasset, Maine makes his own. 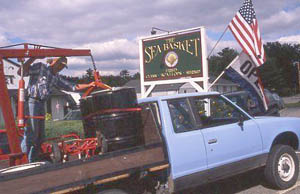 RENNER: Three days a week he takes his sky-blue pickup truck to the Sea Basket restaurant along Route 1. He uses a hydraulic hoist to unload two empty barrels and to pick up two 55 drums of used frying oil left for him outside the restaurant.

ARNOLD: If we were picking up a lot more oil, we'd probably have to figure out a different way to do it. But at this scale, it's just the right way to do it.

RENNER: Arnold takes the oil back to the Chewonki Foundation, an organization devoted to environmental education. Chewonki uses the biodiesel fuel to heat its buildings and power its tractors. It also uses it as a teaching tool. In a corrugated steel shed, Arnold has rigged up a small biofuel demonstration factory.

ARNOLD: Let's go in and I'll tell you how to make it.

RENNER: Arnold leads the group of 12 high school students to a large contraption, a 275 gallon storage tank sitting on a six foot high platform. A rubber hose runs from it to another tank on the floor.

ARNOLD: So it isn't very elegant. But it changes vegetable oil into a biofuel.

RENNER: The sump pump propels the fryolator oil from the oil drum taken off Arnold's truck upwards to a reaction tank where it mixes with methanol and lye, a catalyst. Arnold heats the mixture to 120 degrees, stirs, and lets it settle for eight hours. As it cools, glycerin, a byproduct, settles to the bottom, and gets siphoned off. And, the distilled fuel drains into the barrel on the ground, ready to be tapped.

Biodiesel can be used in any vehicle that runs on petroleum diesel, including Arnold's Volvo station wagon. As Arnold turns the ignition key, the grayish exhaust becomes an almost transparent mist curling out of the tailpipe.

RENNER: But after the cheering stops, even these environmentally conscious students will hop into cars powered by gasoline. They all know that low sulfur biodiesel is kinder to car engines and creates less air pollution than fossil fuels. And they know that biodiesel spills are nontoxic. But they also know they'll have trouble finding the alternative fuel at a price they can afford.

These days, American drivers are paying anywhere between $1.20 to $1.40 a gallon for gasoline. Biodiesel runs anywhere from $1.90 to $3.00 a gallon. But some drivers are willing to pay a little more to keep their consciences, and their engines, running cleaner. John Wathen, who commutes 80 miles a day for his job in Maine's Department of Environmental Protection, mixes the vegetable derivative with regular diesel to keep the biodiesel from gelling in cold weather.

WATHEN: At 40 percent, which is a nice blend for much of the year, it costs me about another penny a mile to drive, which I'm good for a penny a mile. And at 20 percent, it's really only about 10 or 15 cents more a gallon in your total fuel than pure diesel is. So, it's really not a big consideration. 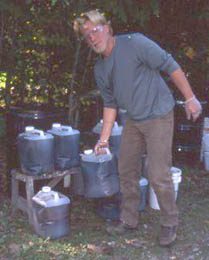 RENNER: To feed his tank, Wathen takes weekly trips to the Solar Market in Arundel, Maine where he fills his five gallon jugs from a 10,000 gallon storage cylinder. Like about a dozen other customers, Wathen pays for 500 gallons in advance, at $1.96 per gallon, and records his withdrawals on the honor system, in a well-worn black binder.

Solar Market owner, Noato Inoye, buys the soybean-based fuel from a Boston wholesaler who gets it from Illinois. Inoye sells it at cost, or at a loss, to bring in customers. But he's convinced biodiesel will slowly win converts, and may even spur some local farmers to grow soybeans or rapeseed and turn that oil into cash.

INOYE: The biodiesel production is going to be a regional enterprise. It really doesn't make any sense to begin transporting biodiesel that was created in Texas to sell it in Maine.

RENNER: Biodiesel is being used in several Midwestern and Southern bus and truck fleets, and transit systems and on the island of Maui. And in Minnesota, the nation's largest soybean producer, a new law passed last month will require that two percent of the state's diesel pool includes soybean-based biodiesel.

Christopher Flavin, president of the environmental advocacy group, Worldwatch, says it will take measures like that, plus tax incentives for producers and users, to bring biofuel out of French fryers and soybean fields and onto the highways.

FLAVIN: Whether you're talking about ethanol or biodiesel or natural gas or hydrogen, and these are all very serious alternatives that are out there today, I think they're all going to require some degree of financial incentive in order to get a start in the market.

RENNER: Flavin says that more people, himself included, would try alternative fuels like biodiesel if they were readily available. For Living on Earth, I'm Charlotte Renner in Portland, Maine.

CURWOOD: Coming up, Germany moves to ban the factory farming of chickens in cages. You're listening to Living on Earth.


The National Biodiesel Board