More than three-quarters of all egg-laying hens in Germany are kept in cages. The government recently declared the farming practice in violation of animal protection laws and decided to ban all hen cages by 2012. Mike Mühlberger reports that many farmers fear the new law will harm their ability to make a living.

CURWOOD: The McDonald's fast food chain has just released its Social Responsibility Report. Among other things, the firm says it's committed to improving animal welfare. For example, McDonald's says that, since the beginning of the year, it has required more humane treatment of egg-laying chickens.

At many farms, chickens are stuffed into cages so crowed that the birds have trouble even turning around. But, McDonald's suppliers now have to reduce the number of chickens per cage. And if those firms were operating in Germany, thanks to a new law, they'd have to phase out all hen cages by the year 2012.

But as Mike Mühlberger reports, not all Germans support the new law. Many German egg farmers fear the ban on cages will put them out of business.

MUHLBERGER: Farmer Alfred Huber knows how to entertain his guests. With folk music, beer and sausages, he's drawn hundreds of visitors to his annual farm festival near Düsseldorf. It's a great turnout, considering the terrible publicity German farmers have had in the past year. First there was mad cow disease, the biggest farming scandal ever in Germany. And now farmers like Huber are being accused of cruelty to hens. Just a day before this farm festival, the Green Agriculture and Consumer Protection minister, Renate Künast, persuaded Parliament to ban the 40-year-old practice of keeping laying hens in narrow metal cages.

[KUNAST SPEAKING GERMAN]
VOICEOVER: The will of German consumers is clear. They want farming to go hand in hand with animal rights and environmental protection. Keeping laying hens in cages has become a powerful symbol of an industrialized agriculture, which only aims to increase productivity with no regard for animals or the environment.

MUHLBERGER: The new law means that German farmers must phase out all cages for laying hens by 2012. Germany is going a step further than the European Union, which is also banning the conventional cages but will continue to allow slightly larger so-called “modified cages.” Most chicken farmers in Germany don't want the public to see how laying hens are kept. TV crews are still regularly denied access to barns. Alfred Huber is an exception. He wants to show his guests why he thinks the new German law is wrong. 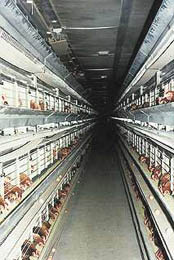 MUHLBERGER: Walking down a narrow aisle about 100 yards long, we're surrounded by 9,000 hens stacked in six rows of cages. Little conveyor belts bring their feed and take away their eggs. Huber opens a cage and pulls out a hen to illustrate the practical advantage of keeping them in cages.

[HUBER SPEAKING GERMAN]
VOICEOVER: You see this? Their feet are clean. The big advantage is that the hens have no contact with their feces. It falls through onto these conveyor belts which run under the cages. So the hygiene is excellent here.

MUHLBERGER: But animal rights groups disagree. They complain that farmers are torturing their animals by putting five hens to a cage, with less space per animal than an 8 1/2-by-11 sheet of paper. Still, Huber firmly believes he's not harming his hens.

[HUBER SPEAKING GERMAN]
VOICEOVER: Yes, it is quite narrow. You know, I used to ask myself, “Are we torturing the hens?” First I said, “I don't know. I've never been a hen.” But then I watched them, and decided, “No.” They experience real joy. I know it from the sound they make every time the feed belt starts up. They signal wellbeing. Yes, wellbeing.

MUHLBERGER: However, scientific evidence suggests that Huber is misinterpreting the sounds of his hens. The EU Scientific Veterinary Committee found that caged hens suffer intensely and continuously. Cannibalism, heart attacks and broken bones are just a few of the symptoms scientists have linked to the cages. They say caged hens are not only inhibited in their movement, but in virtually all other aspects of hen behavior.

Huber is one of seven farmers in Germany who received government funding two years ago under the old agriculture minister to test the new, slightly larger cages. They make provisions for three types of hen activity: perching, sand bathing and laying eggs in a nest. Huber is furious that even the new cages will be phased out by 2012. Dr. Astrid Funke of the German Society for Animal Protection says the new, modified cages simply cause modified suffering.

[FUNKE SPEAKING GERMAN]
VOICEOVER: In the new cages, hens have 300 square centimeters more space than in the old ones. That's about the size of three dollar bills. And the modifications have a mere alibi function. Cannibalism, for example, increases. That's because the hens have more room to attack each other, but not enough to escape. Basically, a cage is a cage.

MUHLBERGER: In a field next to his barn, Huber also keeps free-range hens. They look and sound a lot more at ease. Huber admits there is a market for free-range eggs. But he says, it's too small and adds that it would be impossible to keep all the hens currently held in cages in fields like this. He says it would lead to an outbreak of diseases last seen in medieval times.

But Dr. Astrid Funke feels he's misleading his guests. She says the government isn't suggesting keeping large groups of hens in fields. The main alternative they want to encourage is barn floor housing. It's more labor-intensive, but if managed correctly, she says, hygiene isn't a problem.

[FUNKE SPEAKING GERMAN]
VOICEOVER: It certainly isn't a relapse into the dark ages when ethical norms are enforced. On the contrary, we already have good results in barn housing. The hens can move freely, and the floor can be cleaned. Our experience is that barn hens are five percent less likely to become ill than cage hens. And even their productivity is eight percent higher.

MUHLBERGER: Although 90 percent of German consumers say they're against caged hens, less than 30 percent of fresh eggs sold in Germany are from free-range or barn hens. Even in Huber's farm shop, most customers pick the cage eggs. Whether it's because they agree with his arguments, or because the cage eggs are about 20 percent cheaper, is hard to tell. The only visitors who don't mind being asked about their shopping habits are those who choose the free-range eggs.

[WOMAN SPEAKING GERMAN]
VOICEOVER: They taste better, at least I think they do. And I think it's also better for the animals.

[MAN SPEAKING GERMAN]
VOICEOVER: It's right to take a stand on this, even if the rest of the world doesn't follow us. We forget food scandals too quickly. I think we, the consumers, are to blame. 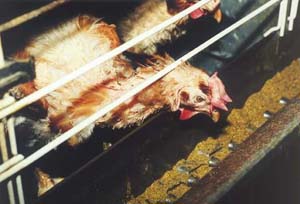 MUHLBERGER: Many German farmers fear that the total cage ban here will only help their competitors, especially in Eastern Europe, but also in the U.S. and Canada. In a study commissioned by the German Poultry Association, Professor Hans-Wilhelm Windhorst, an agricultural expert at the University of Vechta, predicts that as cages are phased out, foreign egg imports to Germany will more than double over the next six years.

[WINDHORST SPEAKING GERMAN]
VOICEOVER: We found that by going it alone, the domestic market share of German farmers will fall from currently 74 percent to 35 percent. We will also lose 4300 jobs. German hens will be better off. But we'll be importing large numbers of eggs from the EU and other countries where conditions are worse.

MUHLBERGER: He says many large egg farms will simply close up in Germany, and move to Eastern Europe and that small farms will go bust. But farmer Huber has no plans to leave. He can only hope that German consumers will prove him wrong, and start to pay more for their eggs. It's not like they don't have the money. According to the Ministry of Agriculture, a German worker's average hourly wage would buy only 5.8 eggs in the 1950s, whereas today, it will buy 136 eggs.

[KUNAST SPEAKING GERMAN]
VOICEOVER: We basically need to redefine quality in agriculture. In the past, the famous slogan, “Made in Germany,” has stood for quality engineering. With a booming food market, why can't this slogan, in the future, also stand for quality barn-floor and free-range eggs?