North Country Radio’s Brian Mann takes us on a journey to Central Mexico to the monarch butterfly’s wintering ground. The butterfly’s habitat is endangered by logging and farming, but a unique program is trying to help residents make a living by preserving the monarch’s habitat.

CURWOOD: Monarch butterflies have begun their spring migration north from the mountains of central Mexico. But over the winter, an ice storm ravaged that country's monarch sanctuary. Tens of millions of butterflies died. Ice storms are nothing new. But scientists say logging, and subsistence farming have damaged the tree canopy that shelters the monarchs. A decade of environmental initiatives have failed to stop the tree cutting. Now the World Wildlife Fund and the Mexican government are spending millions of dollars in a new effort to reshape the local economy. They hope villagers in the area will come to rely on the monarchs for their livelihoods the way they now rely on logging. North Country Public Radio's Brian Mann has our story.

MANN: Riding up through a forest of pine and oyamel fir, the first thing I notice is the cold. This is the tropics, central Mexico. But as the trail winds and kinks toward 11,000 feet, the air sharpens. Even at midday, the sunlight feels thin and fragile.

At the end of a tunnel of trees, I see a twist of color. It's like coming into a church when shadows give way to gold and stained glass. Only here, the colors are alive. 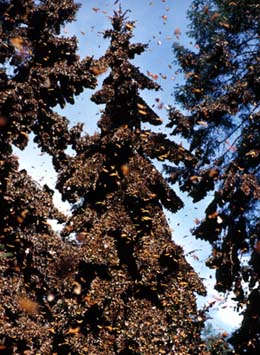 MANN: A monarch butterfly lands on the sleeve of my jacket. This is El Cincua, a monarch sanctuary that sits above the village of Angangueo. The tree branches are heavy with thick clumps of butterflies. Orange and black wings coat the tree trunks. Each insect folds neatly against the next. If you live east of the Rocky Mountains, the monarchs visiting your garden this summer likely come from right here.

BROWER: This thing is a treasure comparable to the Mona Lisa or the Chartres Cathedral windows or Mozart's music.

MANN: That's Lincoln Brower. He's a gray-haired man, a professor from Sweet Briar College in Virginia. Brower is one of the world's top butterfly biologists. So when he looks at the swarm of colored wings, he sees beauty, but he also sees an intricate living mechanism.

Each fall, hundreds of millions of monarchs travel south, surfing on thermal winds. They migrate to escape the harsh northern winter. According to Brower, the butterflies camp out in these mountain valleys to save energy, conserving the fuel they need for the spring migration back north.

BROWER: They have to preserve those lipids for five to six months. And they do this by going up to super-high altitude, and it's cold up there. It keeps them basically in a refrigerator. But, because it's the tropics, it's a stable cold weather.

MANN: The temperature is stable in part because of the tree canopy that drapes overhead. But the region of Mexico that offers this perfect winter sanctuary is tiny, only about 60 square miles. It also happens to be one of the poorest places in North America.

[SOUND OF PEOPLE AND CHURCH BELL]

MANN: This is Angangueo. The village of 5,000 people huddles in a narrow valley just below El Cincua. Cinderblock shops line the narrow streets near the church. Drab, gray houses made of cement cling to the hillsides. Farmers have carved fields into the steep forest. Patches of yellow corn stubble form sharp rectangles against the green.

Rosendo Caro is a forester. He's a thin, handsome man, a field worker for the World Wildlife Fund. Caro tells me that this whole region, where the monarchs live, is unfit for farming. But people still plant corn here because they're poor. They have no choice.

These villages used to live in harmony with the butterflies. But now the human population is growing fast. Families have more children. They clear forest to open new fields. A study published this month in the journal Conservation Biology shows that 44 percent of the monarch sanctuary is already damaged.

[SOUND OF CAR AND BIRDS CHIRPING]

MANN: And then there's the pressure of commercial logging. Three sawmills sit on this short stretch of country road, not far from Angangueo.

MANN: They're not much to look at, open shacks made of corrugated tin. But Rosendo Caro tells me there are 50 of these mills working in the area around the monarch sanctuary. That's enough capacity to cut twice the number of trees allowed under Mexican law. The extra trees, Caro says, will be cut illegally. A half dozen men are working inside, behind a barbed wire fence. They won't talk to me. They're polite enough, not threatening or angry. They just don't want any trouble. But researcher Lincoln Brower says tree piracy is out of control.

BROWER: I have been following the illegal logging that's getting into the buffer zone. In the past year, they're cutting over the top of that mountain, down into the very valley that the monarchs use to stage their spring migration.

MANN: Brower says law enforcement efforts have been clumsy. Mexican government officials declined to be interviewed for this story. But park rangers at the sanctuaries are little more than tourist guides. There are no fences around the core zones, not even signs to show the park boundaries. According to the World Wildlife Fund, police are too poorly trained and equipped to stop the tree cutters.

MANN: Juan Bezaury is head of the World Wildlife Fund in Mexico. Sitting in a stately office, in a tree-lined neighborhood of Mexico City, he looks more like a corporate executive than an environmentalist. And in fact, his plan to save the forest has a lot to do with hard cash. In theory, Bezaury says, Mexican law has protected the butterfly sanctuary since 1986. But the laws mean little to local peasants, desperate to make a living.

BEZAURY: No payment was made to the people who owned and lived out of those core zones. So basically, destruction of the forest continued.

MANN: Now, using a six-million-dollar fund, raised from an American foundation and from the Mexican government, Bezaury has begun writing checks. He's paying money directly to the peasant land collectives that own the forest. According to Bezaury, these organizations, called ejidos, receive payment based on how well they protect the monarch habitat.

BEZAURY: We need to protect those forests for the use by the butterfly. But we're going to compensate you not using the forest, so the forest stays. So a whole new paradigm comes into play here. That's the big concept of the project.

MANN: The program is one of a half dozen initiatives designed to reshape the local economy. Bezaury is buying up commercial logging contracts, hoping to shut down some of the sawmills. There's a push for more tourism, and for eco-friendly tree farms down in the valleys. The idea is that villagers near the sanctuary will come to value the butterflies, maybe even help protect the forest.

MANN: I want to know what villagers think of these efforts. So I drive back to the highlands. This time, I'm headed for El Rosario, the largest part of the monarch sanctuary that's open to the public. El Rosario is supposed to be a major tourist attraction, a model for the new prosperity. But I find myself on a narrow mountain road. The track is washed out in places, and actually passes through a mountain stream.

[SOUND OF DRIVING THROUGH STREAM]

MANN: There are signs of timber cutting everywhere. Whole swaths of forest have been cleared. On the edge of the grove where the butterflies gather, a village has grown up. Clapboard houses and rickety tourist shops line the cobbled road.

MANN: I'm met at the sanctuary entrance by an elderly man wearing a tidy suit and cowboy boots. Leaning on his cane, he introduces himself as Remedios Teyes Cruz. He's one of the leaders of El Rosario's ejido. This land collective has refused to join the Wildlife Fund's program because the payments are too small. And, Cruz says, because locals aren't sure who to trust.

MANN: Shaking his head, Cruz tells me that the Mexican government is making a lot of promises. The government claims that villages affected by the monarch butterflies are receiving millions of pesos in compensation. So we want them to show us, Cruz says, where did those pesos go? Who got the millions of pesos?

This kind of suspicion is common. The villages that surround the sanctuary have endured years of neglect and government corruption. And it's true, that the World Wildlife Fund pays only about half the timber's market value. A fundraising effort is underway to beef up the payments.

In the meantime, people here say they are doing their best to protect the forest. While browsing in one of the shops, I meet a young man named Ramiro. He asked me not to use his full name. Ramiro supports his family by leading tours into the sanctuary.

MANN: There is illegal logging in other ejidos nearby, he says. But here, we don't have that problem. Here, we take care of the forest. Because we make our living from the butterflies.

Ramiro sounds sincere. But among the tourist knickknacks, next to hand-stitched butterfly napkins, I find dozens of little toy logging trucks. It's a sign that people here are still ambivalent, unsure about the promises of a new economy. The hope, of course, is that villagers will build a new relationship with the monarchs. But there's so much need here, so much poverty.


[SOUND OF HIKING AND THE FOREST] 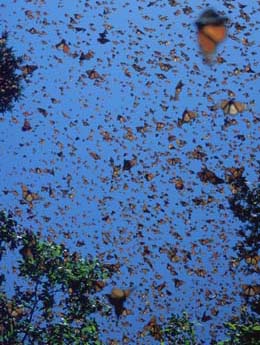 MANN: As I climb back into the forest, the valley feels less remote, less like a sacred place, and more like a piece of disputed real estate. For a while, I just stare, watching and listening. The trees are draped in orange and black bunting. And then, suddenly, the butterflies erupt.

MANN: The idea that all this could vanish is beyond comprehension. Imagine losing a phenomenon as essential as the Grand Canyon or the fall foliage in New England.

It's not that monarchs would be extinct. They'd still exist in Florida, and on the West Coast. But if this forest isn't saved, the monarch migration that graces the eastern U.S. could disappear. Lincoln Brower from Sweet Briar College says the danger is very real. This winter, a few weeks after my visit, the forest was slammed by an ice storm. According to Brower, the broken tree canopy left the monarchs vulnerable.

BROWER: The damage was horrendous. We were seeing literally millions of dead butterflies on the ground, places where they were in piles up to your knees. The forest acts as a blanket and an umbrella that protects the butterflies from freezing after these storms go through. Cutting out a single tree can result in literally killing tens of thousands of butterflies.

MANN: Now that spring has come, Brower says he's confident the population will recover. There might be fewer monarchs in our gardens this summer but the living migration will survive another year. The fear is that despite the new initiatives, logging will continue unchecked. If so, this winter's monarch die-off could be a sign of things to come. For Living on Earth, I'm Brian Mann in El Rosario, Mexico.