The story of vinyl is making a debut on HBO Sunday May 5th. Judith Helfand takes viewers along on a personal odyssey to convince her parents to tear off the blue vinyl siding they just put on their house. Bruce Barcott reviews the film Blue Vinyl.

CURWOOD: As part of its "America Undercover" series, HBO is presenting a documentary about vinyl on Sunday, May 5th. HBO calls it "a toxic comedy picture" that traces one woman’s quest to find out just exactly what’s in the blue vinyl siding that her parents installed on their Long Island home. Bruce Barcott reviews "Blue Vinyl."

BARCOTT: The story of blue vinyl begins when Judith Helfand’s parents decide to refurbish their Long Island house with, yes, blue vinyl siding. Helfand, a Peabody Award-winning filmmaker, turns on her camera and wonders, "What exactly is vinyl, anyway?"

What follows is an investigative odyssey that takes Helfand from New York to Louisiana, California and all the way to Venice, Italy before yielding an answer. "Vinyl," she says, "turns out to be one of the most environmentally hazardous consumer products on earth."

HELFAND: Later, I asked my dad, "If someone had told you that, over the course of its lifecycle from the factory to the incinerator, vinyl could produce a wide array of deadly pollutants that threaten our future with a global toxic crisis, would you still have put it on the house?" "I hope not, honey," he said. But they didn’t write that on the box.

BARCOTT: Vinyl is technically known as PVC, or polyvinyl chloride. The main ingredient in PVC is vinyl chloride, a gas that the chemical industry has known to be extremely toxic since the early 1970s.

Helfand’s quest takes her to the town of Lake Charles, Louisiana, which produces one-third of America’s PVC. There, she meets the widows of chemical workers killed by rare cancers that, they believe, were caused by exposure to vinyl chloride. She also meets a small-town lawyer, preparing a massive class action lawsuit against 32 PVC makers. His case has never gone to court, and is unlikely to do so, because the industry hushes up every claim with large settlement offers. If you love Michael Moore, you’ll like Judy Helfand, who knows how to give her targets just enough rope.

At one point, a vinyl industry spokesperson tries to convince Helfand that PVC is no more dangerous than salt, because they both contain the compound chloride, you know. Helfand isn’t interested in merely exposing the wrongs of the chemical industry. She wants her parents to replace that vinyl siding with something more eco-friendly.

She travels to northern California to find an array of alternatives; hemp, clay, straw bales and something called "rammed earth," all of which are a little too woo-woo for her Long Island parents.

Finally, Helfand finds her siding; genuine pine planks taken from the roof of an old New Hampshire mill. The only drawback: it costs a fortune. "Blue Vinyl" defies easy labeling. It falls somewhere between a "Frontline" exposé and a personal docu-comedy, like Michael Moore’s, "Roger and Me," or Ross McElwee’s, "Sherman’s March." Perhaps, more importantly, it’s one more step in environmentalism’s evolution from a political movement to a consumer movement. 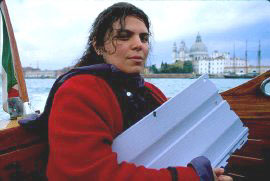 Judy Helfand isn’t an objective journalist. She’s just a consumer who picked up a product, and started asking questions. "Where does it come from? How is it made? Will it kill me? Will it kill the neighbors?" These are questions more and more of us are asking. Helfand just does it on camera, and with enough humor and starting information to make "Blue Vinyl" worth watching.

CURWOOD: Reviewer Bruce Barcott writes about environmental issues for Outside Magazine. Coming up, the heavy footprint of prospecting for black gold in the Rockies. First, this page from the Animal Notebook with Maggie Villiger.