With drilling in ANWR off the table for now, at least, environmental activists are turning to drilling going on now across the Rocky Mountain West. From Montana to New Mexico, energy companies are busy exploring for gas and oil. From Radio High Country News, Adam Burke reports.

CURWOOD: As Congress continues the debate on how to meet the nation’s future energy needs, the Bush administration is already advancing dozens of oil and gas projects across the Rocky Mountain West. Federal agencies have reduced red tape to allow new drilling on public lands. For example, in Wyoming, the Bureau of Land Management may allow up to 51,000 new gas wells. Opponents of drilling say the most sensitive landscapes of the West are at risk. From Radio High Country News, Adam Burke reports.

PEARSON: You can see it, broken and scattered, all over the ground here. I mean, you can’t take a step without stepping on a fragment of pottery.

BURKE: We’re in Canyons of the Ancients National Monument, created two years ago to preserve one of the highest concentrations of archaeological ruins in North America. Among the patches of sagebrush and Mormon Tea, we find not only pottery shards, but the remains of a ceremonial structure known as a Kiva. Thirty yards away, blaze orange tape stretches through the stunted brush, dividing the mesa in straight lines. It marks the places where 40,000 pound vehicles, known by some as "thumper trucks," might soon be crawling across this mesa top in search of oil and gas. And that has Pearson worried.

PEARSON: This mesa is probably one of the more pristine corners of Canyons of the Ancients National Monument. And running monster seismic thumper trucks up here, or another kind of motor vehicles associated with oil and gas exploration, will leave an indelible mark of mechanical human civilization in a place that doesn’t seem to have seen any of that for eons. 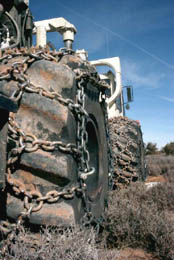 BURKE: Recently, these seismic trucks, which generate sound waves, became the focal point of controversy when an energy contractor began work in Utah’s Dome Plateau. The area has been open to oil leasing for over a decade. But it’s just a few miles from Arches National Park and has stretches of scenic wilderness that many say deserves special protection.

As they rolled over the soft red earth on Dome Plateau, crushing brush, grasses and the occasion tree with their huge balloon tires, thumper trucks made headlines in western, and then national, newspapers. But the issue reached a critical pitch when the conservation group, Southern Utah Wilderness Alliance, or SUWA, abruptly succeeded in shutting down the Dome Plateau project with work still in progress.

BURKE: That’s the sound of energy contractor Western GeCo’s equipment being ferried out by helicopter. The company began losing $45,000 a day. In court documents, the Wilderness Alliance had contended that the trucks would destroy living soil crusts that prevent erosion in the desert. Liz Thomas is a staff attorney for the organization.

THOMAS: The soils up there are very fragile. And, the only available research there indicates that it takes anywhere from 50 to 300 years for these soils to come back. 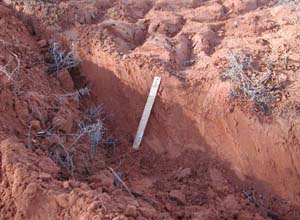 THOMAS: The BLM had the Western GeCo crew out raking and covering up ruts for a distance of at least three-quarters of a mile. These ruts were not just in excess of four inches, but they were in excess of fifteen inches deep. And these ruts are about three feet plus wide. Sure, the BLM can go out and rake them. And maybe, visually, you can’t see it. But those soils don’t heal.

BURKE: The shutdown caught energy companies by surprise. For the industry, seismic trucks represent the cutting edge of environmental protection and exactly what’s needed in a fragile desert landscape.

WRIGHT: It lets you know more about the subsurface before you actually go to the point of drilling a hole in the ground to see what’s down there.

BURKE: Stewart Wright, a geophysicist for Western GeCo, says the term "thumper truck" is a misnomer, because the trucks don’t thump. They use low frequency sound waves. The result is a three-dimensional picture that allows oil companies to drill with precision. That means fewer roads and fewer wells. And, says Wright, the trucks themselves are designed to leave a minimal trace.

WRIGHT: Most companies have equipped them with very large tires that spread out the weight so that, in terms of actual pounds per square inch, there’s no more than, say, an average vehicle. And, it’s our contention that any impact is minimal and ephemeral. It tends to heal itself rather quickly. But if you don’t want to take our word for it, you can go out there and judge for yourself. 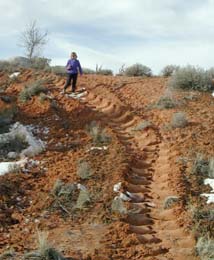 BURKE: Back at Canyons of the Ancients, there is an opportunity to do just that. Directly south of the area now proposed for exploration, the BLM’s Randy Lewis shows me where seismic trucks rolled seven years ago.

LEWIS: And right here in front of you, you can see the tread from the tires. It’s just like a tractor tire. The cleats are at an angle.

BURKE: The herringbone pattern of giant tread marks is barely visible on the clay soils. We followed these traces for a quarter mile, over hard scrapple desert in bunchgrasses. There are only a few ten foot stretches where the trucks have left a lasting impact. And Randy says this is the only area he can find where there’s any trace at all.

LEWIS: After this program was over, you looked at the tracks and said, "Oh my gosh, it’s going to be here forever." But, two or three years, and it’s gone. And then, ten years later, you’ll never see any of it.

BURKE: Seismic trucks are just the most visible aspect of a larger battle being waged over oil and gas development in the West. Last May, Vice President Cheney’s task force directed agencies to increase production on public lands.

A BLM memo in Utah instructs field offices to treat drilling as their "number one priority." The agency is shortening public debate, and eliminating, what it calls, "impediments" such as seasonal wildlife restrictions. People like Claire Mosely of the industry group Public Land Advocacy, say it’s about time companies can drill on land they’ve leased for years.

[SOUND OF A CROWD]

MOSELY: We’re not getting a free ride here. We bend over backwards.

BURKE: But, conservationists say the efforts to streamline cuts the public out of the process and puts the environment at risk. Jim Baca was chief of the BLM in the first Clinton administration.

[SOUND OF A CROWD]

BACA: The BLM simply does not have the manpower to properly go out and do environmental assessments and studies on the effects of this drilling. They have about the same amount of people today as they had ten years ago. Their budgets have been continually cut. And so, they don’t really have the infrastructure in place to even make their decisions.

BURKE: The shutdown at Dome Plateau in no way slowed the energy rush the West is witnessing. But it has reminded the BLM that the public is watching. Kent Hoffman, an associate field office manager in Durango, Colorado says that if the proposed project at Canyons of the Ancients goes forward, his staff will be strict with any permit violations.

HOFFMAN: Well, initially, they’ll be shutdown. And that’s economically unfavorable to them, certainly. And secondarily, they’ll be expected to bring it back to a condition that’s sustainable.

BURKE: Still, standing on the top of Cannonball Mesa in Canyons of the Ancients, Mark Pearson says, these assurances are cold comfort.

PEARSON: Once this gets going, BLM will not have the backbone to actually force compliance with what’s written up, at least if the experience in Utah is any guide.

BURKE: Pearson says his alliance will be checking, whereever it can, to see that energy companies follow their permits to the letter. For Living on Earth, I’m Adam Burke in southwestern Colorado.