The Sage Grouse is a bird, about the size of a chicken, which lives in the arid, sage steppe ecosystem of the West. The sagebrush habitat is vanishing and so are the birds. As Clay Scott reports from Montana, there’s disagreement over how to restore the sagebrush grasslands, and how to save the endangered Sage Grouse.

CURWOOD: Efforts to protect the spotted owl once created conflict with the logging industry in the Pacific Northwest. These days the Sage Grouse has been ruffling feathers among cattle ranchers and energy developers in the high desert of the west. That’s why the Sage Grouse is called "the spotted owl of the prairie." The numbers of the bird have plummeted from an estimated two million in the 1800’s to about 140,000 today. Sage Grouse live on a landscape that at first seems completely barren, but it’s crucial habitat for a wide variety of wildlife. Clay Scott reports from Montana on the fight over the sage grouse and its habitat.

SCOTT: On a cold spring morning in southwest Montana, Ben Deeble of the National Wildlife Federation is out looking for Sage Grouse. The sun is just coming up, but at 6,000 feet elevation the temperature is below freezing. Deeble walks briskly through the sagebrush. There are no obvious landmarks in this vast sea of grayish-green, but he knows exactly where he’s going. He stops and points. 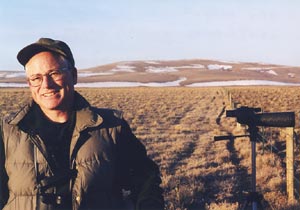 Ben Deeble of the National Wildlife Federation tracks the number of grouse in southwest Montana during the mating season. (Photo: Clay Scott)

DEEBLE: See where the light is hitting the high cut bank. Go to the right to the dark cut bank and there’s two cocks right below that.

SCOTT: Through my binoculars I make out two distant patches of white, the neck feathers of male sage grouse. This is their communal mating ground, called a "lek." For a two week period in the spring the mottled brown and black males congregate at the lek before dawn. They strut, spread their fan-like tails, and rub their wings across inflated air sacs on their necks, hoping to attract females. I ask Deeble why the birds have chosen this place for their lek.

DEEBLE: This is a good spot because the sagebrush isn’t very tall, but they need to go to tall sagebrush with a lot of grass and forbes for safe nesting. So probably the hens are nesting a mile or more from here.

SCOTT: The wary birds flush before we get close enough to observe their mating display. They’re as big as large chickens, but surprisingly fast flyers. Deeble takes out a GPS unit, notes our position and records the number of grouse we saw. Next spring researchers will be able to return to this same spot to count the number of mating birds. Sage Grouse can have home ranges of hundreds of square miles, yet each year, like spawning steelheads, they return to the exact same spot to mate. But that extraordinary fidelity to place also makes them vulnerable to changes in their habitat, and almost everywhere the birds live that habitat is being altered, sometimes radically.

DEEBLE: What we find is everywhere in these habitats we’re disturbing them in ever-increasing tempos. For whatever reason, they’re like the canary in the coal mine, from the standpoint that they’re one of the first species that disappears as these sage steppe ecosystems become unraveled.

SCOTT: The sage steppe ecosystem is a vast, arid area of mostly public land stretching from eastern California to the western edge of the Dakotas. Healthy sage steppe includes a variety of sagebrush species, along with bunchgrasses and other plants. But much of the ecosystem is in decline along with many of the species that live in it. Sage Grouse, in particular, are dependent on old growth sagebrush. Their mating and nesting grounds have been disturbed by oil and gas drilling, coal bed methane development, the conversion of sagebrush to agriculture, and especially by the grazing of livestock.

Historic over-grazing in the sage steppe has reduced native grasses that many species depend on and led to the spread of invasive weeds that thrive in degraded soil. One recent study estimates that exotic weeds in sage country are spreading at more than 4,000 acres per day. Throughout the west the majority of grazing has been on leased federal land. Now, some environmental groups say it’s time for that practice to stop for the sake of the sage grouse and for the health of the entire ecosystem. But ranchers here say banning grazing on public land would deal a death blow to entire communities. Roger Peters is the owner of the Dragging Y Ranch. Like many ranchers, he’s suspicious of what he calls the environmental agenda.

SCOTT: Peters’ ranch is on 60,000 acres of his own land, along with several times that amount of leased federal land, much of it sage grouse habitat. He says he manages the land in an ecologically sound way and he has no patience for those who want to tell him when and where to graze his cattle. He’s especially angry at those environmental groups who think the sage grouse should be put on the endangered species list. If the bird is listed, Peters says, many western cattle operations would effectively be brought to a halt.

PETERS: Why penalize the guy that’s got the last one? He’s obviously the best caretaker of this endangered species, whatever it is. But whoever the poor guy is, the endangered species are found on his place, he’s the one whose management is penalized.

SCOTT: The advocacy group American Lands Alliance is leading the efforts to list the Sage Grouse. Mark Salvo works on sagebrush issues for the organization. He denies that his position is anti-rancher.

SALVO: We’re not suggesting that public lands ought not be used. But we are suggesting that they have been used or abused in the past, and that changes need to be made. That’s what the plight of the Sage Grouse is showing us.

SCOTT: But not all environmental groups feel an endangered species listing is the answer, at least at this point. Groups like the National Wildlife Federation are working with state and federal agencies, as well as landowners and others, to develop management plans for Sage Grouse habitat. Ranchers are encouraged to keep their livestock away from nesting areas and to rotate their grazing to allow grass and other plants a chance to recover. Mark Salvo supports those efforts but says much more is needed. The looming threat of the Endangered Species Act, he says, is necessary to keep both ranchers and government agencies focused on the Sage Grouse issue.

SALVO: Unless that threat is there, unless we continue to push to list the species, they may back off on some of their current efforts to restore and conserve them. What my challenge is to resource users and agencies and others who don’t want to list the species on the Endangered Species Act is you probably have six to eight to ten years to reverse the declining trends for Sage Grouse and their habitat on your own.

SCOTT: Six to eight to ten years, because it will take at least that long for a final ruling on the status of the sage grouse. But some experts say that’s not nearly enough time, that much of the sage steppe is so degraded that decades will be needed to really turn things around. One federal biologist just sighed when I asked him how sage habitat might be restored. "The truth is," he said, "that we just don’t know. We can’t put it back the way it was because we don’t understand everything about how it used to be."

SCOTT: Someone who does remember how things used to be is Bernard Harkness. In a high basin below the Continental Divide, where a snow-fed creek flows through low sagebrush, I found the retired sheep rancher standing in front of the rough log cabin he’s lived in for 77 years. He told me of a time when the birds and their habitat were in better shape. 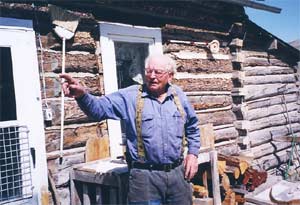 Bernard Harkness remembers when hundreds of thousands of sage grouse lingered in the grasslands near his cabin. (Photo: Clay Scott)

HARKNESS: They would come in here right around the first of July, just thousands and thousands of them. I’ve seen them flying-- I don’t know how many you’d see, hundreds of thousands. It’s a big, open grassland, and wide; oh, five, six, seven miles. You can see in any direction that’s open there. As far as you could see, there would be sage grouse walking, eight to ten feet apart.

SCOTT: Harkness dug out a yellowed copy of The Lima Ledger from 1935 and pointed to an article titled "Hunters Bag Ton of Sage Hens." The headline was meant literally. In this basin alone, hunters killed 10,000 birds in a three day season.

HARKNESS: If you wanted a Sage Grouse dinner then you’d just walk out with a .22; get three or four. You fried them, fried the breast. And then the others, the backs and the legs and the giblets, you’d make a gravy just like turkey gravy or something, and on the potatoes, and that was a pretty good meal.

SCOTT: As I was leaving, Bernard Harkness reminisced about the spring mating display of the sage grouse. "Before I die," he told me, "I’d sure like to see the birds do that dance again." In the waning days of the mating season I finally managed to do just that. I didn’t see the flocks of thousands that the old timers tell of; only five males at their dawn lek. They were spread out a few yards apart on the low rise, yellow air sacks bulging through the white neck feathers, spiky black tails fanned out aggressively behind them. As the sun came up, they strutted and puffed their feathers, waiting for reluctant hens, alert for eagles and coyotes, the only thing moving in a sea of sagebrush. For Living On Earth I’m Clay Scott in Beaverhead County, Montana.