Return of the Brown Pelican

Pelican numbers have dramatically rebounded since the pesticide DDT was banned in the U.S. So much so that the birds are now having to deal with crowded conditions. That’s why Maryland is now the northernmost part of the birds’ range. We’ll take you to one of their island nesting sites.

CURWOOD: You’re listening to NPR’s Living on Earth. Ever since the pesticide DDT was banned three decades ago, many bird populations have made dramatic comebacks from the brink of extinction. Among them, the Brown Pelican. Pelicans used to nest from Florida to North Carolina. But as their population has risen, they have extended their range as far north as Maryland’s Chesapeake Bay.

[SOUND OF BIRDS AND WATER UNDER]

CURWOOD: We take you there now. Our guide is Dave Brinker. He’s an ecologist with Maryland’s Department of Natural Resources. And he’s out on remote Spring Island checking up on the birds.

(BIRDS AND WATER LAPPING AGAINST SHORE)

BRINKER: These are the pioneers. They’re at the edge of their range. It’s like the old, "Go West, young man." These birds are finding North Carolina too crowded. And, they’ve found plenty of fish up here in the Bay, and a nice remote island. So, it’s like, "Let’s set up housekeeping there."

[SOUND OF FEET WALKING IN BRUSH AND BIRDS]

BRINKER: You have to watch your feet everywhere you walk out here. You can easily step on an egg and crush it.

BRINKER: You saw what happened when we walked in. They all flushed. If people came here time and time again and disturbed them all the time, you risk a lot of egg loss.

BRINKER: So you look out, right over here on the shoreline, there’s probably 150 Pelicans sitting right there. It’s like a city, really nice and dense.

BRINKER: You’re hearing Great Black Back Gulls and Herring Gulls. Pelicans have just basically a little croak. You don’t really hear a lot of vocalization out of them.

You see these nests with the smaller blue eggs. The Pelican eggs are the large white ones. And then you have cormorants nesting in amongst the Brown Pelicans. And they have that real pretty small blue egg. 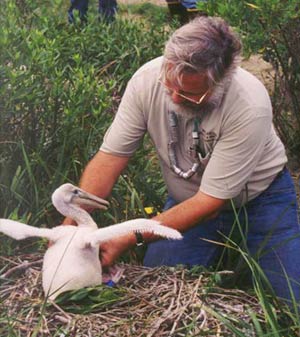 BRINKER: So far, no chicks. I band at a certain age where the chicks are not very mobile. You get a whole bunch of people, and you try and build a human corral, and keep these great big, gangly juvenile Pelicans in the middle while you, one by one, pull them out and band them. And, it’s hard work.

BRINKER: Brown Pelicans, when they’re flying, have a wingspan of about six feet. And, of course, they have this pterodactyl-like bill sticking out in front of them. That’s what everybody sort of focuses on. People really like Pelicans.

BRINKER: Everybody remembers the poem, "What a wonderful bird is a Pelican. Its beak can hold as much as it’s belly can."

CURWOOD: Dave Brinker says he expects to band about 400 Pelican chicks this season. To see a photograph of him doing just that, visit out website at www.loe.org.