Milford Beeghly built an empire and a science out of corn when, in the 1930s, he started working on hybrid seed corn. His grandson, Montieth McCollum, has pieced together a documentary of Beeghly’s successful, yet closeted, life. Bruce Barcott reviews "Hybrid: One Man’s Passion for Corn."

CURWOOD: It’s Living on Earth. I’m Steve Curwood. And coming up, nature’s lost and found department. But first, his name might not ring a bell for you. But, if you were a farmer from the 1930s to the 1950s, you knew that Milford Beeghly was the King of Corn. That’s because Mr. Beeghly perfected a technique of breeding hybrid seed corn that grew straight and tall and, most of all, produced a high number of ears.

Milford Beeghly starred in his own TV commercials and built a small empire selling his seed to farmers throughout the nation. His contribution to corn and country is the subject of an upcoming PBS documentary. Bruce Barcott reviews "Hybrid: One Man’s Passion for Corn."

BARCOTT: In his faded overalls and feed store cap, Milford Beeghly looks like one of those wizened old timers who congregate in coffee shops during the Iowa caucus season. But Beeghly is no ordinary corn farmer. Back in the 1930s, he began experimenting with corn pollenization. He hoped to create a heartier, better yielding strain that would relieve the hunger of the world.

At that, he succeeded. During the ’40s and ’50s, the Beeghly Hybrid Seed Corn Company spread the gospel of hybrid corn throughout the American Midwest and, ultimately, around the world. Thousands, perhaps millions, avoided starvation because of Beeghly’s advances.

But as Milford Beeghly obsessed about creating a more perfect kernel, his own family withered on the vine. At that, at its heart, is what Monteith McCollum’s remarkable one-hour film "Hybrid" is about.

McCollum happens to be Milford Beeghly ’s grandson. He tells his grandfather’s story in a series of interviews with Beeghly’s children, and the old man himself, who was in his late 90s and still sharp as a pitchfork when "Hybrid" was made.

Don’t expect another Ken Burns’ sepia photofest, though. McCollum shot the whole film in black and white, and combined stop-action montages, eerie landscape portraits, the use of crackling phone lines, and a haunting violin score to create a documentary flavored with the creepiness of a David Lynch film.

"Hybrid" never directly confronts today’s controversy over genetically engineered crops. But the parallels between the alarm raised by Milford Beeghly’s hybrid corn and today’s Frankenfood fears are too obvious to miss. Back in Beeghly ’s day, his crude cross-pollenization techniques were condemned as "unnatural," even sinful.

BEEGHLY [ON TV]: We spoke of the dangers of closed in breeding as if it were wicked. Indeed, orthodox agronomists called it "plant incest."

BARCOTT: Beeghly overcame this resistance with relentless salesmanship. He pitched in person, and also in some hilariously corny television ads. 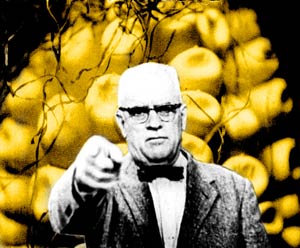 BEEGLHY [ON TV]: Let me introduce myself. I’m Milford Beeghly of Beeghly Best Hybrids. Better order your corn now from your local dealer.

BARCOTT: If you I mightthink Beeghly ’s TV persona sounds repressed, you should have seen him at home. Around the dinner table, his wife and three kids were lucky to get two sentences out of the old man. All their years on the farm, Beeghly ’s children watched him steal time away from them, and lavish it on his beloved corn.

"I think he related to his plants where he couldn’t relate to us," says one daughter who hints that she ended up working out her relationship to dad in therapy.

Monteith McCollum started out to make a film about the creation of hybrid corn. But somewhere along the way he unearthed an even better tale--the poignant story of lonely Midwesterners isolated by geography and culture, yearning for the comfort of human contact.

CURWOOD: Reviewer Bruce Barcott writes about the environment for Outside Magazine.