New research shows that antibiotics inadvertently released into the environment might be toxic to plants. Janet Raloff, senior editor of Science News, discusses the implications with host Steve Curwood.

CURWOOD: Emerging research is now showing that antibiotics are apparently toxic to some plants, including valuable crops. Much if not most of antibiotics given to livestock in feed and as medicine gets excreted. Often this manure is used to fertilize crops. Humans also take antibiotics as drugs and much of that can wind up in sewage sludge. Janet Raloff is senior editor at Science News and she joins me now. Janet, while scientists have looked at the effects of environmental antibiotics on wildlife, the effects on plants have been mostly ignored until recently. Tell us, what are some of the results?

RALOFF: Well, generally, with fairly high concentrations of antibiotics, but not beyond what could occur, you’re getting stunting of plants, and in some cases, they just die.

CURWOOD: Well, what does this all mean, now?

RALOFF: For a farmer, it can mean reduction in yields and therefore income. In addition, there’s always the risk that even if it doesn’t hurt a plant so that you can see the effects, these plants may be pulling out the antibiotics and holding them, so that if it’s something you eat, you may be bringing these antibiotics to the dinner table, and that’s definitely not something you’d want to do.

CURWOOD: What plants are these antibiotics showing up in?

RALOFF: There hasn’t been a real comprehensive survey, but so far they’ve seen them in pinto beans and peas, soybeans and millet, corn barley, some water fern, and at least three weeds.

CURWOOD: How likely is it that farmers are already seeing the impact of antibiotics on their crops?

RALOFF: It’s really too early to tell. It’s certainly possible. But because nobody is measuring the levels of antibiotics in the manure and sewage sludge that’s being applied to fields, nobody knows who’s vulnerable. The kinds of impacts you would expect, at the concentrations typically found where they are observed in manure or sludge, would probably lead to a subtle loss of yield. And in that case, it might be easily missed for the kinds of variation from year to year that you would see from weather or climate change, or even whether pests were hitting you this year. 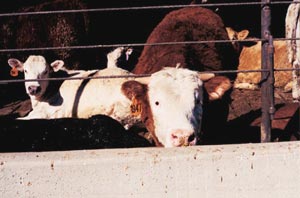 CURWOOD: Two years ago, I bought some bags of cow manure to put on a flower bed with some pansies and some other annuals I was growing in there. And nothing happened. It was like I hadn’t put any fertilizer in there at all, and I wonder if it’s related to this.

RALOFF: Well, interestingly, there’s a group of agricultural researchers in Western Canada that made a similar observation not too many years ago. At the time they were trying to measure the impact of manure, how much was beneficial. If two pounds per unit was good, was four pounds better? And they actually found out that the more they added the worse the plants grew. They didn’t know what to make of it at the time. When I asked them about antibiotics as a possible factor there, they said they never thought of it back then, but it’s definitely a distinct possibility.

CURWOOD: How big a problem could this be, Janet?

RALOFF: Well, it could be a reduction of, you know, ten to fifteen percent in the yields of a particular farmer’s crops, and that’s money that’s lost income for the year. In addition, there’s always the situation where you may be bringing this stuff to the dinner table, and that’s not exactly what you’d want to be feeding your kids. It can contribute to antibiotic resistance, meaning drugs won’t work so well in people who are eating these things. Overall, at this point, it’s really early stages of the research. Who knows how many plants are affected and at what concentrations, and, actually how much of it is actually being delivered onto fields. Nobody’s making those measurements, yet.

CURWOOD: If someone were to discover that this was a problem, what would be some of the ways to deal with it?

RALOFF: Preliminary research suggests that there’s a couple of strategies farmers might want to take, at least from the manure angle, and that’s that, if you can make sure that the manure gets mixed around with lots of oxygen, it tends to encourage the growth of bacteria that will break down these drugs. In addition, sunlight might do the same thing – there’s some preliminary work that suggests you can cut the drug content in manure by half if you have this manure out in sunlight and turned around a lot. And, there’s also it can be sequestered, the drug just sort of bound to various types of soil, and so you might be able to put some kind of additives with your manure on fields, when you’re putting it in there to basically tie it up and make it not available to plants. From the human end, because we haven’t been talking about that much, but the drugs that you and I take can also end up in the environment the same way. There can be a tailoring of waste treatment processes – basically your sewage treatment plants. You would add a different process that would make sure that it pulls out these drugs. Right now, there’s been no effort to do that.

CURWOOD: Janet Raloff’s story about antibiotics and plants appeared in the June 29th issue of Science News. Thanks Janet for taking this time with us.