The Selous in Southern Tanzania is Africa’s largest game reserve. The park has the largest population of elephant, crocodile, wild dog and buffalo in the continent. And as Tom Verde reports, its remote location makes the Selous an ecologist’s dream.

CURWOOD: In the late 1970s, naturalist and author Peter Matthiessen described the Selous game reserve in southern Tanzania as "Africa, the way it used to be." Today, this World Heritage Site is one of the largest strongholds of wild animals left on earth, and it remains mostly untouched and undiscovered. Tom Verde visited the Selous and has this story.

VERDE: The first thing that strikes you as you fly, and fly, and fly over the Selous, is its sheer enormity. At 22,000 square miles, it is by far Africa’s largest game reserve. Denmark could easily fit within its borders. So could Belgium – twice. Lying east of the Great Rift Valley’s frowning rain-soaked mountains, about 90 miles south of the Tanzanian capital of Dar es Salaam, the Selous offers just about everything you could ask for in an African wilderness: rolling savanna, grassy plains, and woodlands, thick with thorny acacia, comically fat boabab trees, and towering borassus palms. 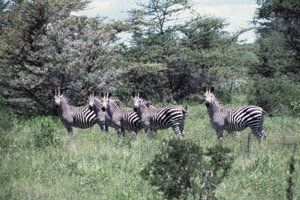 VERDE: And, of course, wildlife, lots of it – some 36 different species in all, including hippopotamus, impala, wildebeest, Cape buffalo, giraffe, warthog, zebra and lion, not to mention 440 species of birds. A place of extremes, the Selous is also home to some of Tanzania’s last black rhino. While, on the other hand, it sustains Africa’s largest populations of crocodile, wild dog, and elephant. Sooner or later, they all come to drink along the banks of the Ruaha and Rufiji rivers, two pristine waterways that bisect the reserve and empty into the Rufiji delta, one of East Africa’s largest water catchment areas. In short, the place is an ecologist’s dream -- an uninhabited, and largely unexplored, ecosystem. One species you won’t find in abundance here is homo sapiens, and with good reason: one that’s about the size and color of a peppercorn, but with twice as much bite. 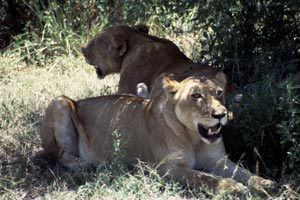 CAREY: The Selous has never been densely populated in its history, because of the tsetse fly. The tsetse fly precludes the possibility of domestic livestock production.

VERDE: Frank Carey is a guide at the Selous safari camp, one of only half a dozen tourist camps operating in the reserve. In addition to the tsetse, which carry bacteria harmful to cattle, goats and other domestic animals, the Selous’ rock hard, black cotton soil, says Carey, is impossible to cultivate – another natural safeguard against human habitation.

CAREY: Look at that big croc.

VERDE: But neither bad roads nor pesky flies kept big game hunters in search of crocodile and other trophies out of the Selous during the early years of the last century, including one Frederick Courtney Selous, an English writer, hunter and naturalist for whom the place is named.

CAREY: In his books he started to regret if he’d shot too much of something. But one must remember in those days that to this type of exploring Englishmen, this was like candy in a store. It seemed inexhaustible.

VERDE: Established as a hunting reserve in 1922, the Selous still attracts hunters, now under stricter government control. Yet their continued presence, ironically, makes it a safer place for wildlife. Half of each substantial hunting fee, as much as $30,000 for a two-week safari, goes right back into the management and conservation of the reserve. Without this money, says Carey, the Selous might well disappear.

CAREY: Tanzania, like a lot of African countries, are poor, they’ve got very small budgets for the administration of national parks and game reserves. There would be very little reason for anyone to want to look after that kind of country, so it becomes a vacuum, which then could be poached out. It would be a no go in no man’s land, where there’d be no administration at all.

VERDE: Hunting takes place in the southern part of the reserve, while here, in the north, along the Hippo-choked banks of the Rufiji, is where you’ll find the Selous’ handful of safari camps.

VERDE: There are far fewer game drives and tourists here compared to northern Tanzania’s more popular destinations like the Serengeti. Access, or, rather, lack of it is one reason. Over the last half century, while northern Tanzanian tourism developed as an adjunct to neighboring Kenya’s popularity, fueled by the likes of Ernest Hemingway, the Selous remained the providence of only the most determined. Before the days of regularly scheduled flights, a fairly recent development by the way, getting to the Selous from Dar es Salaam meant traveling across open country in a four-wheel drive for hours, sometimes days, over roads and bridges that, half the time, were washed out and impassible. All the more reason to take advantage of the preferred method of viewing wildlife in the Selous, a walking safari, in the company of an armed guide.

CAREY: Walking, you’re on the ground, and it puts you in a far richer experience. We can stop, we can pick up dung, we can smell it, we can hear everything. It’s a wonderful feeling. 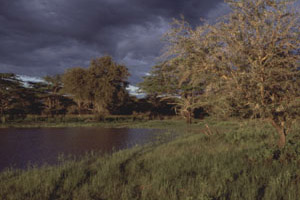 VERDE: Getting down and dirty with the ecology of the Selous needn’t always involve close scrutiny of animal dung. The extraordinary complexity of the African bush, Carey demonstrated, is just as evidence in the simple branch of an acacia tree.

CAREY: Now, as you see me manipulating it, ants are coming out.

VERDE: Lots of ‘em, swarming from a cancerous looking growth on the branch, which the tree itself created, as a home for the ants. It also generates sweet tasting sap, as food. The insects do pay for their room and board, by protecting the tree from leaf-hungry herbivores like giraffes. Just how do some of the world’s smallest creatures square off against the tallest?

CAREY: They can sting. Now, if you’ve got them on your hand, it’s not a problem at all. But if you imagine them on the lining of your mouth, they don’t taste nice, and they do sting. So you’ll see a giraffe eating a tree like this, and he’ll take maybe up to five mouthfuls from different branches, and then he’ll move onto the next one, and the ants are running around, and he’s eaten. But he hasn’t eaten a tree to a standstill, so in actual fact there’s been a compromise reached.

VERDE: In 1981, author Peter Matthiessen published Sand Rivers, an account of an extended walking safari through the Selous. He concluded that, for this unique habitat to survive, it must be self-sustaining. With the income from controlled hunting, not to mention the ingenuity of those ants, this unspoiled mass of African wilderness appears safe, at least for the time being. For Living on Earth, I’m Tom Verde, in Tanzania’s Selous Game Reserve.