Queen of the Woodchucks

Woodchucks are among the most common wild mammals in North America. But other than that they love to dig up people’s gardens, not much is known about the social behaviors of these corpulent rodents. University of Southern Maine biologist Chris Maher has been tracking woodchucks for the past five years and she’s made some unusual discoveries. Maine Public Radio’s Matthew Algeo reports.

TOOMEY: Nature documentaries have made heroes out of those determined folk who risk all to study the likes of crocodiles, bears and elephants. But what about the study of, shall we say, the less noble, less charismatic animals amongst us? What about the woodchuck?

Despite the fact that this voracious rodent is among the most common mammals found in the wilds of North America, they haven’t been widely studied. Matthew Algeo of Maine Public Radio caught up with one researcher who is determined to unravel the secret life of this corpulent creature.

ALGEO: It’s early on a warm, muggy morning. The air is heavy with fog. And Chris Maher is on the prowl for woodchucks.

MAHER: Oop, there she is. That’s probably B.J.

ALGEO: Maher is a Biology professor at the University of Southern Maine. And for the past five years, she’s been studying the woodchucks at Gilsland Farm, a nature preserve just outside Portland.

After she spots one, Maher and her research assistants set cage-like traps around the holes that lead to its burrow. They bait the traps with apples and peanut butter and then they wait, and wait. 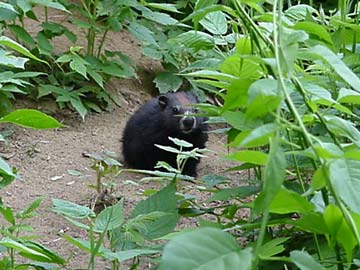 MAHER: The record is 20 minutes for catching somebody. That’s very unusual. It usually takes us, oh, three, four hours.

ALGEO: When she catches a woodchuck for the first time, Maher weighs it and puts and identifying tag through each ear. She also plucks some fur for DNA testing. And sometimes, she’ll put a distinctive mark on the animal’s back with Clairol hair coloring.

MAHER: I’m just interested in trying to figure out why these animals are the way they are.

ALGEO: On this day, it only takes about an hour for Harry, a woodchuck pup named after Harry Potter, to succumb to the irresistible lure of apples and peanut butter. 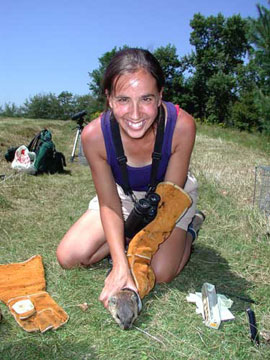 MAHER: Well hi there. Alright, we’ve already caught you once.

ALGEO: When they’re frightened or angry, woodchucks chatter their teeth, which is what Harry does. [TEETH CHATTERING] He’s just been trapped for the second time in ten days, and he’s clearly not happy about it.

(TEETH CHATTERING)
ALGEO: Harry’s about the size of a small rabbit, with dark brown fur and a big twitchy nose. Maher coaxes him out of the trap, and into a long canvas bag with Velcro straps running up the side.

MAHER: And then I can just open up the part of the bag that I need to get to him. And, we’ll pull some hair.

ALGEO: After making sure the identifying tags in his ears are still secure, Maher checks Harry’s weight. An adult woodchuck can weigh as much as 14 pounds. Harry tips the scales at about two pounds. Not bad for a young pup.

MAHER: So, he’s put on a little bit of weight in the ten days since we caught him. Hey, come on bud.

ALGEO: In a few minutes, it’s all over and Harry’s ready to be returned to his burrow. He squeals as Maher gently drops him back down his hole.

MAHER: There you go. Yeah, good boy. Ok, we’ll put you back.

ALGEO: Maher’s research is showing that woodchucks are much more social than previously thought. For example, Maher has noticed that male and female adults often interact outside the Fall breeding season. She’s also discovered that young female adults tend to build burrows close to their mothers, while the males move farther away.

MAHER: What we’re getting are these clusters of related females. You’ve got the mother, and you’ve got her daughters settling all around her. That’s the first step towards evolving a complex social organization.

ALGEO: Eventually, Maher hopes to find out whether woodchucks, like their cousins the beavers, are monogamous. If course, as a woodchuck researcher, there is one question that Maher gets asked a lot. How much wood would a woodchuck chuck if a woodchuck could chuck wood? It’s a question to which she has a quick reply.

MAHER: It costs a dollar to find out the answer. So, that’s a little bit of extra funding for my research.

ALGEO: Do you know the answer?

ALGEO: Maher hopes her research will eventually lead to a better understanding of the evolution of social behavior, not only in woodchucks, but in all mammals, including humans. For Living on Earth, I’m Matthew Algeo in Portland, Maine.