In 2000, Oregon voters passed Measure 7 which some have called the most radical private property rights initiative in the United States. The measure states that government actions that reduce property values deserve full compensation. The measure has been tied up in a lawsuit. But as John Ryan reports, if the Oregon Supreme Court upholds Measure 7, many environmentalists believe the state’s progressive land-use planning regulations will be dismantled.

CURWOOD: The Fifth Amendment of the U.S. Constitution says that private property shall not be taken by the government without compensation. And for years, advocates of property rights have argued that governments should pay if they impose regulations that diminish the value of private property.

So far, the U.S. Supreme Court hasn’t been willing to rule that zoning and other land use restrictions amount to violations of the Fifth Amendment, most recently letting a construction ban stand at Lake Tahoe. But a referendum, passed by voters in Oregon, is once again raising the issue. John Ryan has our report.

[SOUND OF WATER DRIPPING IN MINE SHAFT]

HARDIN: We’re headed for the original tunnel that started into the workings of the Opp Mine. And, it goes back in about 3600 feet, and branches off. And there...

RYAN: Frank Hardin stands near the mouth of the abandoned Opp Mine, in the foothills of southwest Oregon’s Siskiyou Mountains. Prospectors struck gold here in 1860. But these days, not much emerges from the mine shaft except cool air and the sound of water dripping from its roof.

RYAN: Undersized fir, alder and madrone trees, draped with lichens, cover the mine property. The trees are stunted because the maze of mine tunnels drains water away from their roots. In 1990, Hardin and his mother-in-law bought the 150-acre property to open a gravel mine.

HARDIN: Well we’ve been making property payments for 12 years on this for $2000 a month, and haven’t got a dime in return yet. 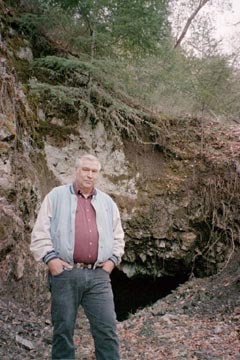 RYAN: Eight years ago, Jackson County denied Hardin a mining permit in order to keeping mining trucks from hauling gravel through the nearby historic town of Jacksonville. Hardin has been fighting the county, and the town, ever since.

HARDIN: They’ve denied us the right to develop our property and to use it for what it was intended for. And the property has no other value. It won’t grow trees. Obviously, the gold is pretty well mined out because they quit mining it 50 years ago. So the main value is the rock.

RYAN: Hardin may finally get the chance to dig up the 18 million tons of gravel beneath his land. In the year 2000, Oregon voters passed Measure 7, the nation’s most sweeping private property rights initiative. The measure declares government actions that reduce property values to be "takings" of private property, deserving full compensation.

As soon as the measure passed, Hardin filed a $50 million claim against Jackson County and Jacksonville.

HARDIN: We’d still prefer to operate the property as what we intended for when we bought it. But if we can’t do that, then we would hope that Measure 7 would force the county to purchase the property at fair market value. And then, we could go do something else.

RYAN: Hardin’s claim is in legal limbo since Measure 7 itself has been tied up in a lawsuit based on technicalities for more than a year. The Oregon Supreme Court is expected to issue a final decision sometime this year. 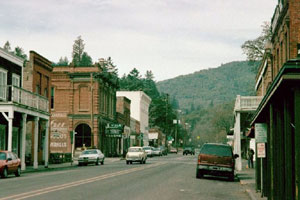 RYAN: A mile down the road from the Opp Mine, Mayor Jim Lewis takes me on a walking tour of Jacksonville. More than 80 buildings in this one-grocery store, one-gas station town are on the National Register of Historic Places. It was the first town in America to be designated a National Historic Landmark.

LEWIS: Everything on this street, with two exceptions, are from the 1860s or a little thereafter.

RYAN: Tourism drives the economy of this town of century-old inns and Victorian mansions. All traffic from west of town gets funneled onto Jacksonville’s historic Main Street. And most locals feel heavy truck traffic already hurts the town’s tourist appeal.

Currently, one gravel mine sends loads of aggregate rock and gravel rumbling through the heart of town. Lewis says the town opposes any more mines in the area.

LEWIS: There it is right there. That’s an empty load. Because of the trucks that come through here full of aggregate and-- well, they affect the quality of the ambiance here. People are walking around here shopping or whatever. And, in any given five minutes, there’s going to be six, eight of those rigs going one way or the other, people trying to cross the streets, noise, dust, and the potential for further road breakdown.

RYAN: The conflict between Frank Hardin and Jacksonville is not so unusual. Differing visions of how private land should be used spark conflicts all across the country. But with Measure 7, much more is at stake than one gravel mine or one town. The measure would affect almost every law or regulation that might reduce property values.

State officials estimate that claims under the measure could cost Oregon five and a half billion dollars a year. Jacksonville and other local governments in Oregon could face the stark choice of going bankrupt paying claims, or giving up their say in how Oregonians use the land. Mayor Jim Lewis.

LEWIS: It would impose such high economic risk on a city or county, or any other jurisdiction that was involved in land use decisions, that it would basically put them out of business in that field. And that’s not what we need or want in Oregon, I don’t think.

RYAN: The results of Oregon’s nearly 30 years of land use planning are clear as day in the state’s largest city. Portland’s compact pedestrian-friendly neighborhoods are connected by light rail, bus lines, and bike lanes. With anti-sprawl measures that protect farms and forests at the suburban fringe, the Portland area has become a mecca for urban planners nationwide.

Robert Liberty is Director of Thousand Friends of Oregon, a Portland-based group that advocates for strong land-use planning. He says if Measure 7 goes through, the effects on the state would be devastating.

LIBERTY: It would lead to the effective dismemberment of Oregon land-use planning laws. And that would mean we would eliminate urban growth boundaries that we have around all our cities. We would eliminate protection of farmland. We would be eliminating a lot of laws that help promote affordable housing, and that protect things like dunes along the coast. It’s hard to imagine how much land use regulation could even go on because the measure is retroactive, as well as covering all new regulations.

Dave Hunnicutt is legal director of the property rights group Oregonians in Action. Speaking at a conference in Portland, Hunnicutt warned that, even if Measure 7 is struck down by the courts, it’s only a matter of time before the state legislature, or voters themselves, correct, what he sees as, the unfairness of Oregon’s efforts to channel growth away from rural areas.

HUNNICUTT: If we continue on with the same scheme that we have now, whether it’s my organization, or the home builders, or somebody else, somebody is going to come along and blow up the system. And I don’t think that’s in the best interest of any of us.

RYAN: Since last Fall, groups on both sides of the issue have had ballot initiatives waiting in the wings aimed at reviving or revoking Measure 7, in anticipation of the Oregon Supreme Court’s ruling on its legality.

Though the deadline for this November’s ballot passed in early July without a court ruling, both sides are sure to continue the Measure 7 fight into next year. Robert Liberty of Thousand Friends of Oregon says the stakes are high for the rest of the country if Measure 7 becomes law.

LIBERTY: Many other states and regions have looked to Oregon for ideas and leadership on stopping sprawl, replacing it with smart growth. And that example would come apart before their eyes, and would be used as an argument all across the United States why it was impossible to do this. And I think it would set back the smart growth movement by years, if not decades.

RYAN: If Measure 7 takes effect in Oregon, it might also give the property rights movement nationwide a shot in the arm. If "no regulation without compensation" can become the law of the land in Oregon, some say it could happen anywhere. For Living on Earth, I’m John Ryan in Portland, Oregon.


1000 Friends of Oregon
Oregonians in Action">