Host Steve Curwood talks with Christine Sheppard of the Bronx Zoo. She coordinates an innovative program that exports molted feathers from hornbills in U.S. zoos to Malaysia, where they can be used in traditional ceremonies.

CURWOOD: You’re listening to NPR’s Living on Earth. In Southeast Asia, the Rhinoceros Hornbill is often killed for its feathers used in traditional ceremonies. Scientists at the Wildlife Conservation Society came up with a novel solution to help halt the decline of this rare bird. Why not use the feathers that fall from captive birds in zoos? Christine Sheppard leads this effort from the Bronx Zoo. Dr. Sheppard, how did you come up with this idea?

SHEPPARD: Well, I’d known for a long time that the federal government has a repository of bald eagle and golden eagle feathers that are made available to Native Americans for ceremonial purposes. And someone I work with, Dr. Elizabeth Bennett, who’s been part of the Malaysia Wildlife Service for about 20 years, became very concerned – about five years ago, the increase in eco-tourism was causing an increase in native dance performances. And one of the popular dances was one that was done with Hornbill feathers. Each of the dancers has a fan of these feathers on each hand so that the hands represent wings. And the dance represents the birds in flight. 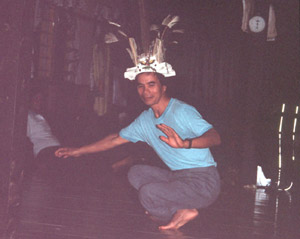 They only use the central tail feathers. So it’s only a few feathers from any bird, which is why it makes much more sense to get a crop of feathers every year from a bird that is sort of done with them, than it does to shoot a bird, which can never produce another set of feathers.

CURWOOD: Can you describe these Hornbills for me? What do these feathers look like?

SHEPPARD: Well they’re basically black and white. They’re maybe, I don’t know, 18 inches long. They have a pretty squared off tail. And, if you think of the tail as being all white with a black band across the middle, that’s what they look like. 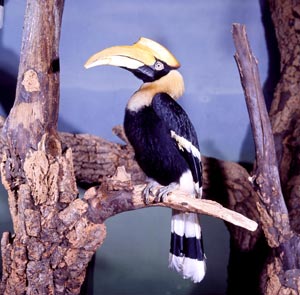 CURWOOD: So, what was the response when you started calling around to various zoos that have Hornbills?

SHEPPARD: Every single zoo that has these Hornbills was extremely excited about becoming part of this program. Because we are always looking for ways that we can support conservation of our animals in the field. 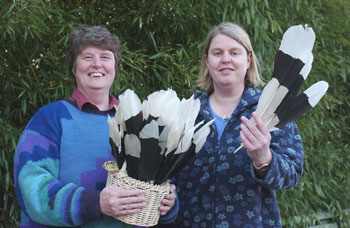 CURWOOD: I would think that part of the power of doing the dance, in an ancient society, would be from all the work that went into getting these feathers. How appropriate is it to use captive feathers for something like this?

SHEPPARD: Well that’s actually a very complicated question. The feathers that we’re providing are really for real ceremonies. Dr. Bennett came up with what I think is an absolutely brilliant idea of providing white turkey feathers which people could die a black band across for basically performances for tourists. And she did discuss with the headmen of various villages whether or not they would find it inappropriate to use tail feathers that were brought in from birds that had been in the United States. And they were delighted, partly because, in many of the areas that we’re talking about, the birds have basically disappeared because of hunting pressures. So they did not seem to have any difficulty whatsoever. It’s the bird itself that’s important, not where it is.

CURWOOD: Christine Sheppard is a curator for ornithology at the Bronx-based Wildlife Conservation Society. Thanks for taking this time with us today.

SHEPPARD: It was great to be here.