Waste Not, Want Not

The Canadian province of Nova Scotia has a new program for curbside pick-up of not just yard waste, but food waste as well. Living on Earth’s Cynthia Graber reports on this province-wide compost program.

CURWOOD: Nearly a third of all household garbage is yard and food waste. And all that organic matter could be conveniently and cheaply recycled by nature in a compost heap. That’s what residents of Nova Scotia found out when they wanted to cut down on their garbage. They put together a program to pick up and compost organic waste from nearly every home in the Canadian province. Living on Earth’s Cynthia Graber reports.

GRABER: It’s morning at the Caribou Lodge Bed and Breakfast in Halifax, Nova Scotia. The sun peers in through the huge glass windows of the dining room. Owner Anna Ellis tells me to scrape my kiwi peels, tea bag and leftover cranberry scone into the small green bin sitting next to the garbage can.

ELLIS: Basically, anything that’s organic goes into the kitchen compost bin ‘till it’s filled. And then it’s taken outdoors to the larger compost bin, which goes out to the street.

GRABER: Every two weeks, Ellis tells me, a trash hauler comes by and takes the contents to a regional composting center. She says this new system took some getting used to.

GRABER: More than two years ago the government of Nova Scotia took an unusual step to deal with their growing trash problems. They asked residents to separate out yard waste and food waste. The goal is to cut down on the waste stream and keep organics out of the landfill. There’s no oxygen in landfills. So when bacteria eat away at organic matter, the result is methane, a potent greenhouse gas. Also, as food decomposes, it mixes in with other landfill trash and creates a toxic soup called leachate that can run off and pollute nearby soil and water. Brian Smith, director of Solid Waste Resources in Halifax, says the old, crowded city landfill was beset with other problems, too.

SMITH: The history of the landfill had been very dark. It had been plagued by seagulls, flocks of seagulls, by odor problems, by problems with the community generally. And it was very difficult to go back to the communities around Halifax and say we’d like you to take another landfill of that kind.

GRABER: So the province began a new recycling and composting program and it made it the law. It’s now illegal to toss that apple core or the ends of your sandwich into a Nova Scotia trash can. Instead, here in Halifax, it all goes into a green bin that gets picked up curbside and taken to one of the city’s two composting facilities.

GRABER: This huge warehouse is the drop-off point for incoming waste.

WORT: We’re now on the 10th floor where the whole process starts.

WORT: Things like half grapefruits, a lot of food waste, some leaf and yard waste, Christmas trees, the orange peels. Over here, there’s a lot of animal waste, green apples.

GRABER: Wort points to a conveyor belt that runs above our heads. The garbage mix goes up this belt to the other side of the warehouse to workers at a sorting line.

WORT: We are pulling the contaminants off the best we can, and then the material is shredded and we’re ready to put it into the containers.

GRABER: While composting is theoretically easy, contamination makes it more difficult on an industrial scale. Barry Freisin is the province’s solid waste resource manager. He reaches into the pile and pulls out one example.

FREISIN: What I’m holding here is an automatic dishwasher detergent box. It has a metal spout on it which is sharp, dangerous if you want to buy compost. Hopefully, they can pick it out on the metal sorting line.

GRABER: Workers pick out the occasional tin can or once in awhile even a bowling ball. Then everything gets shredded up. It’ll spend one to two weeks in large, warm, humid containers where the composting process gets a jumpstart. Then the piles are moved to another building where bacteria work on them for another eight to ten weeks.

WORT: Let’s go to the back end now and take a look at the final thing.

GRABER: Wort leads me through the door of another huge warehouse. He walks over to a pile and picks up a handful of rich, brown material that smells like damp earth.

WORT: It’s got paper in it, it’s got pieces of wood, but generally, it’s basically leaf-like material. This will spend another three or four months before it actually gets used in a soil blending. So it’ll break down substantially more than what it is right now.

GRABER: In the first two years, this facility processed 40,000 tons of compost. Wort says the market for the finished product is primarily golf courses and landscapers. Nova Scotia hopes its investment in a new landfill and recycling facilities will, in the long run, save the province money, too. The old landfill still costs three million dollars a year just to treat toxic leachate and greenhouse gases.

But the program has its challenges. It’s been tough to get apartment buildings on board, and there have been problems with people throwing all kinds of junk into their compost bins. The province says the answer is public education, like the table set up here at a festival in downtown Halifax.

WOMAN: They break when you drop them, what’s that? But, so we’ve got glass, metal, plastic, cigarettes. Never go in the green bin. Excellent.

GRABER: From patrons of the neighborhood tavern to the cabby who drove me home one night, many people here are surprisingly knowledgeable about the new recycling and composting program, even down to the nuances of how to deal with those annoying fruit flies. Back at the bed and breakfast, my host Anna Ellis tells me how she deals with the teeny pests. One: empty the small kitchen compost bin frequently, she says, especially in the summer. And two:

ELLIS: If you roll anything organic, food scraps and the like, in newspaper first, and then put it into the compost bin, this helps to cut down, as well. 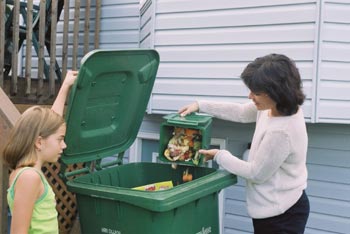 GRABER: Sure, it takes some extra effort. But for most Nova Scotians, composting is becoming just another daily routine. They know what happens to their trash and they know what they’re doing makes a difference. And now, when they go to other cities or other countries, many folks here tell me they’re uncomfortable throwing an apple core into the garbage can. For Living on Earth, I’m Cynthia Graber in Halifax, Nova Scotia.

CURWOOD: You’re comments on our program are always welcome. Call our listener line anytime at 800-218-8899. Our email address is letters@loe.org. And visit our webpage at www.loe.org. That’s www.loe.org. CDs, tapes and transcripts are $15. You’re listening to NPR’s Living on Earth.