Host Steve Curwood talks with Andrea Griffin, a researcher in Sydney, Australia. She is using stuffed foxes to train tammar wallabies to run away when they see this non-native predator.

CURWOOD: Animals born in captivity have a mixed record at making it in the wild. One of the biggest problems can be getting them to understand the danger of predators. That’s the case with tammar wallabies. These small marsupials are on the brink of extinction on mainland Australia, because they don’t sense danger when they encounter predatory, non-native cats and foxes. Andrea Griffin is a researcher in psychology at Macquarie University in Sydney. She’s training captive born wallabies to fear their predators, in hopes they might survive once released into the wild. Ms. Griffin, why don’t tammar wallabies naturally fear foxes and cats? I’d think that would be instinctual.

GRIFFIN: Foxes and cats have only recently come to Australia. Foxes were only brought over by the European settlers about 130 years ago. So they are, in fact, a novel predator for tammar wallabies. 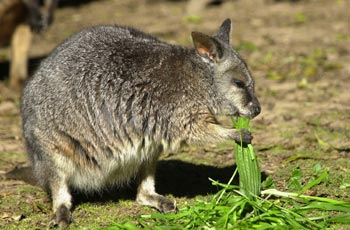 CURWOOD: You have now enrolled these wallabies, or some of them, in a predator aversion school. What’s your technique? What do you do to teach them about predators?

GRIFFIN: Well, I use a stuffed fox and I teach them to associate a fox with something they’re naturally afraid of, and that’s being caught by humans with nets. So in practice, I use the stuffed fox as the signal, so they become afraid of it, because it signals that they’re going to be caught by a human, which they absolutely hate.

CURWOOD: Tell me a bit about the fox; what exactly does it look like?

GRIFFIN: It looks like an absolutely real fox – it is a real fox and people actually get quite a fright when they stumble across it by mistake. If I put it behind a door and somebody walks into the lab all of a sudden they will get quite a fright. It’s very realistic. For example, my dog gets very freaked out when she sees it.

GRIFFIN: The very good wallabies run away and continue running and continue alarm thumping. That’s the very highest response that I see. They’re inside an enclosure, so they’re very motivated to try to get out of that enclosure. The B- students, they might hop away as far as they can, then they’ll stop and they’ll keep watching that predator.

CURWOOD: And the ones that fail?

GRIFFIN: I don’t have any that fail. They all learn.

CURWOOD: All good students! Now, animals can teach each other, sometimes, about dangers. What experience have you had about this among the wallabies?

GRIFFIN: I do have evidence that the wallabies can learn from watching another wallaby that has been previously trained, because we’re not going to be able to train every single wallaby that goes out into the wild and they have to be able to learn from each other once they’re out there. For example, experienced mothers would have to teach their young to be fearful of foxes, so that these responses that we’ve trained in captivity are maintained in the population. But those experiments are still underway. 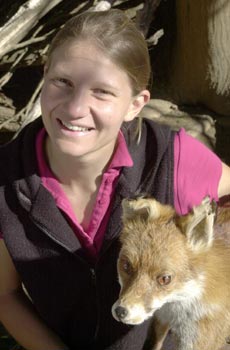 CURWOOD: Andrea Griffin is a researcher at Macquarie University in Sydney, Australia. Thanks for taking this time with us today.