A Lesson In Sight

CURWOOD: Whether you’re a native or a visitor, getting around a major city can often be a hassle. But for the visually impaired, getting around town can be an obstacle course. Producer Dmae Roberts wanted to navigate the streets of Portland, Oregon with her eyes closed. She got this lesson in sight from 19-year-old Andrew Meyer.

ROBERTS: I’ve worn glasses since I was 10 years old. Each year, I have to get a stronger prescription. As others who are nearsighted probably do, I wonder what it would be like to someday lose my sight.

[SOUND OF WALKING IN HOUSE]

ROBERTS: Sometimes I close my eyes and try walking through my house. I wonder how it would be to walk around the neighborhood, to get to the grocery store, to do what I consider simple things.

MEYER: We can hear the difference when we walk through a door, when there’s a hallway off to your left, when it’s just a closed wall. The sound changes.

ROBERTS: I met Andrew Meyer when he was in Portland for a summer program by the Oregon Commission for the Blind. Andrew has been blind since birth. He was abandoned in an alleyway in the Philippines when he was a baby and was adopted by an American couple with four children. 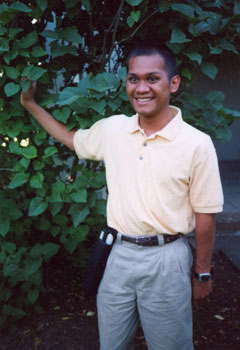 MEYER: I’ve always been someone to use sights as sort of a generic term. Ever since I was little, my foster family tells the story of when I was sitting in the living room, or after dinner, I’d go, ‘let’s go watch TV.’ And they’d all look at me like, ‘you’re not going to go watch TV. You can’t see.’ And ever since I was little I always felt that that was correct to use those terms.

ROBERTS: Early on, Andrew learned that he, too, could see, just not with his eyes. He learned to not only walk with a cane, but to run in track meets. I ask Andrew to explain how he finds his way around. He immediately starts physically mapping out the patio at the dormitory where we’re standing.

MEYER: What I do is basically find one place that I know exactly where I am. And I know exactly where I am right here. If worse comes to worse, I come back here to the door. That’s where I’m going to go to. And then, we’d trail one wall. We just go around the room. So, I’m just going to walk around the patio really quickly, turning you left. See, there’s a chair there. A little bit farther, there’s a drop-off. Okay, so that’s the edge of the patio. So, I learn how wide this patio is. But how long is it? So I’m just going to turn right and walk the length of the patio. And I find a few things, like a pole. And we reach the end of the patio.

ROBERTS: Sound and touch are important to help him see, as Andrew moves through his environment.

MEYER: We always pay attention to what’s underneath our feet. So for example, right now, we’re on cement. Now I’m on grass. Room carpet versus, say, like indoor-outdoor carpeting that’s not very thick carpeting, or brick. Go from concrete to brick. So we learn how to pick that up.

ROBERTS: How about trees? How do you deal with them?

MEYER: You can tell when you come up to them. Or if they happen to hit in your face, you learn later, you might want to duck when you get to that point.

ROBERTS: I look around and see the trees with branches close enough to hit my face. It would be hard to get around even a backyard, let alone a forest or woods. But Andrew tells me that it doesn’t matter if it’s a forest path or a city street. Any terrain that isn’t predictable is difficult.

MEYER: If you led me in like a field of grass, and tell me, ‘find the nearest sidewalk,’ good luck. If there’s a lot of one thing around us, it’s really hard, and if nothing is straight lines. Blind people like straight lines. They’re very predictable.

ROBERTS: City streets have a lot of straight lines. But there’s a lot of traffic to avoid: cars, trucks, bikes, even skateboards. I want to hear how a trip to the store would sound to someone without sight. So I give Andrew a mini-disc and a mic. And he records his trip to the grocery store with two teen friends, Tiane and Sumner, who are also blind.

MEYER: Okay. We’re walking to Safeway. And that rattling in the background which is Tiane’s little cart so she can carry all of her food that we all buy in the cart. So we don’t have to carry it by hand. Because it’s really annoying to walk from Safeway carrying it by hand. And Sumner’s to my right. Say ‘hi’ Sumner.

MEYER: Yeah, see, that’s Sumner. We’ve got our traffic to our right. As a blind person, we’d sometimes key off the traffic. Not right now because we’re walking on the sidewalk. So the traffic is off to our right. So at the moment, I’m not keying off of it. I don’t really care it’s there, until we get to a street. And then I will care if it’s there. Because that’s how we’ll know when to go. Of course, we have really easy crossings here. And we’re going to go ahead and cross the street that was off to – well, no, I guess not. Yes we are. We’re going to cross the street that was right off to our right which is Woodstock.

TIANE: And people are stopping.

TIANE: People on bikes and skateboards.

MEYER: Yeah, there are a bunch of people just riding past us. I barely notice. And I just hit a branch.

MEYER: And, I’m walking with Tiane.

MEYER: And ow! I guess she just walked into something, too. She found a branch, well, too. And now we’re going to go ahead and cross Woodstock because we’ve been on the other side where Safeway is.

TIANE: And it’s time to cross.

MEYER: We’re going to get a personal shopper. And we’re going to tell them what we want. And they drag us around the store. So we don’t have to know the store, because every single Safeway is different and they change all the time, as you guys probably know.

ROBERTS: After walking nearly half an hour to get to the store, Andrew and his friends go inside. An employee, who helps the visually impaired to shop greets them.

SAFEWAY EMPLOYEE: Do we need a basket?

MEYER: How about – just a basket, I think, is going…

SAFEWAY EMPLOYEE: That’s what I meant. Yeah, like a hand basket?

SAFEWAY EMPLOYEE: Well you have a lot of shopping to do.

MEYER: Well, to be on the safe side.

MEYER: I don’t know. I might find some items I suddenly take a liking to, while we’re on the way.

ROBERTS: As they go about their shopping, Andrew turns off the tape deck. Later, he told me how disorienting it was to record with headphones while trying to listen for street sounds. I can’t imagine crossing the street without my sight. And I marvel at his ability to navigate the world around him.

Andrew’s walk to the store inspires me to step outside to my own backyard and try moving around with my eyes closed. I cross my own patio and walk on the soft grass, then try to cross to the plum tree in the back. It feels like a long walk. But eventually, I – oh, I found it. For Living on Earth, this is Dmae Roberts in Portland, Oregon.

CURWOOD: Our profile of Andrew Meyer was made possible with a grant from the Corporation for Public Broadcasting. It’s part of the Hearing Voice Series.