Living on Earth’s Maggie Villiger reports on a desert beetle that can teach people a lot about collecting water in a dry environment.

CURWOOD: Just ahead, modern science takes a look at the ancient mushroom medicine of Asia and finds encouraging news for some cancer patients. First, this page from the Animal Notebook with Maggie Villiger.

VILLIGER: Water is hard to come by in Southern Africa’s Namib Desert. It’s so dry there that rainfall is considered negligible. But stenocara beetles use an ingenious technique to collect water from the early morning fog that rolls in just a few times per month. Their wings are made of a bumpy field of mounds that attract water and waxy valleys that repel water. And when the beetle bends down and positions his wings leaning into the wind, the incoming fog collects as tiny water droplets on the wings’ bumps. 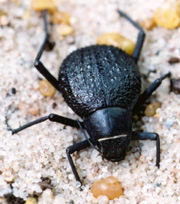 The droplets grow until they detach and roll with gravity down the waxy pathways into the beetle’s mouth. Through evolution, stenocara beetles hit upon the perfect bump pattern. If they were more spread out, the wing surface would fill too quickly and not be able to catch enough fog. If the bumps were any closer, the droplets would be too small and would blow away.

It’s an elaborate way to get a drink of water, but researchers say humans could replicate this fog collecting technique in dry regions. Scientists envision bumpy coverings for tents or buildings that could trap water for drinking or farming. Thanks to these desert beetles, they already know the perfect bump ratio. That’s this week’s Animal Note. I’m Maggie Villiger.

CURWOOD: And you’re listening to Living on Earth.