This week, we have facts about an atomic tourist attraction. April marks the start of tours to a nuclear bunker in West Virginia, once meant to house the U.S. Congress in case of nuclear attack.

CURWOOD: Welcome back to Living on Earth. I’m Steve Curwood.

CURWOOD: It’s summer and that means summer vacation. For some people, vacation may be the beach, for others it may be trips to exotic locales in distant lands, and still others might enjoy their break by taking a tour of an atomic bomb shelter. That’s right. It all takes place 700 feet below the swanky Greenbrier Resort in White Sulfur Springs, West Virginia, behind 25 ton doors, past miles of concrete corridors, in a bunker created to house the U.S. Congress in the case of nuclear war. Dubbed "Project Casper," the bunker was built for $14 million in the 1950s and remained hush-hush until The Washington Post exposed the hideaway in a 1992 article. 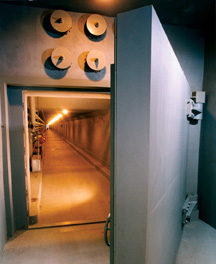 Though the Greenbrier is a five-star resort, the bunker is no paradise. It’s equipped with decontamination showers, an isolation chamber, and an infectious waste incinerator. The facility also contains mini-replicas of the House and Senate Chambers, even down to the oil paintings of the founding fathers on the walls. And to communicate with the outside world, a television studio complete with a faux Washington, D.C. backdrop. 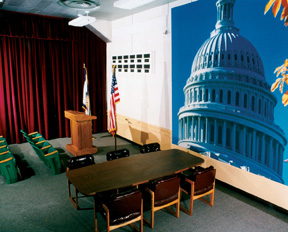 Today the bunker is rented for tours and special events. James Bond parties, we’re told, are a favorite theme. About 20 such gatherings happen each year in the subterranean wonderland, featuring 1950’s costumes, big bands, dancing and cocktails. Care for another martini, Dr. Strangelove? I’ll take mine shaken, not stirred. And for this week, that’s the Living on Earth Almanac.