They’ve been used in traditional Asian medicine for thousands of years. Now, mushrooms are gaining popularity as over-the-counter supplements here in the U.S. Kim Motylewski reports on what western science knows about these fungi.

CURWOOD: If you look at Chinese art from the 15th century, chances are you may see a picture of an old man holding a mushroom. Together they symbolize longevity and good health. The mushroom has been a part of herbal medicine in China for more than 2,000 years. Now it looks like the ancients may have been onto something. Modern cancer doctors across Asia routinely prescribe mushroom medicines, and in the U.S. mushroom-based supplements are available in health food stores. American scientists have begun to investigate the potential and possible risks of myco-medicines. Kim Motylewski reports:

MOTYLEWSKI: Reishi, good omen plant, miraculous chi. These are a few traditional names for the mushroom known to science as ganoderma lucidum.

ZHANG: And another name for it is Ling Zhi. 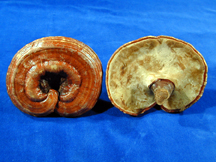 MOTYLEWSKI: Ling Zhi is what Chinese doctors such as Vivian Zhang call this mushroom. She’s an acupuncturist and herbalist who manages the pharmacy at the New England School of Acupuncture.

[SOUND OF UNSCREWING A JAR LID]

MOTYLEWSKI: She opens one of 200-gallon-size jars that fill the pharmacy shelves and pulls out some Ling Zhi.

ZHANG: So it’s growing like this. And the stems grow up and then down. We have a little bit shelf or a little bit hat of the Ling Zhi. So, like a cloud around here.

MOTYLEWSKI: Ling Zhi belongs to a group called the polypores. Instead of having gills on the underside, polypores have smooth skin on both sides, full of tiny holes. Ling Zhi has a lovely red varnish on a kidney-shaped cap. These Ling Zhi are dehydrated and feel as light as cork.

ZHANG: And if you bite it, if you chew it, it will taste bitter. And in Chinese medicine we say it has bland flavor, based on its function.

MOTYLEWSKI: That function is to tonify, or strengthen, a variety of bodily functions. Ling Zhi is sometimes called the ‘panacea polypore.’ Listen to Vivian Zhang and you can understand why.

ZHANG: It is good for increasing the memory and for anybody who has fatigue or has the hair loss problem, or even has the digestion problem and feel very stressful. And then, this might be able to calm down spirit and even the gray hair may sometimes grow in where it much more slower than before.

MOTYLEWSKI: The Ling Zhi mushroom is commonly used for these problems at low doses: one or two grams per day. Cook the mushroom in water for about three hours, add a bit of honey, and drink. But Vivian Zhang says Ling Zhi has a dual nature. Given at 10 or 15 grams a day, it’s powerful medicine. In China she would give it to cancer patients who were also getting chemotherapy and radiation.

ZHANG: The person if take Ling Zhi and the Ling Zhi could promote the immune system. Then the person also could have a relatively better appetite than before. So they have a better chance to survive from cancer.

MOTYLEWSKI: In fact, several studies have shown that certain mushroom compounds do enhance immune function and some can actually kill cancer cells in test tubes and in animals. Several human studies also show these extracts can improve survival rates and reduce the recurrence of cancer. In Japan, an extract of shiitake mushrooms, called lentinan, and a compound called PSK, from the Turkey Tail species, are part of standard cancer therapy. So why haven’t we heard about these treatments in the U.S.? Well, almost all of the research on mushrooms has been done in Asia. Some say there’s a bias in the U.S. against foreign science. And in fact, some of the mushroom work is not up to western standards. But now, public interest in integrative medicine has drawn attention to mushroom remedies.

[SOUNDS OF A CROWD]

STAMETS: What happened to the concept that you are what you eat?

MOTYLEWSKI: Meet Paul Stamets, founder of Fungi Perfectae, a mail order company that grows and sells mushrooms for your pantry and your medicine cabinet.

STAMETS: I mean, who in the world brought up the concept of the immune system as a disconnect from food? That’s preposterous. Do you have to go to the drugstore in order to buy a drug, in order to affect you immune system? No. It’s a lifestyle.

MOTYLEWSKI: Paul Stamets is working a table at the annual Seattle Mushroom Show. Across the room, a crowd watches as a chef sautés wild mushrooms for a quiche. The aromas that waft our way are mouth-watering.

MOTYLEWSKI: Stamets is bringing medicinal mushrooms to the masses. Fungi Perfectae sells a line of mushroom capsules, teas, and tinctures that he says promote a healthy immune system. Paul Stamets has studied fungi for 30 years. He’s an expert grower and a conserver of fungal biodiversity. But he is not a doctor. His products, he says, are based on the best available science. He knows that science is incomplete but he says that we already understand enough to help ourselves.

STAMETS: If I’m wrong I’d love to know why and I want to build from that. But I’m definitely inspired by the influx of data, I eat data, you know, as brain food. I have to have more data or I won’t survive.

MOTYLEWSKI: He also swallows his own multi-mushroom capsules every day. They contain Ling Zhi and several other species, such as griphola frondosa or Maitake. In nature, this one blooms like a giant carnation, often a foot or more in diameter. There’s trametes versicolor, or Turkey Tail, which grows in fan-like shelves, each covered with velvety fuzz, and hericium erinaceous. It looks like a shaggy white wig, its round cap draped in long, hair-like strands. Some call it Lion’s Mane or Monkey’s Head. Stamets says one big reason the medical potential of these and other mushrooms has lain untapped for so long here in the U.S. is cultural prejudice.

STAMETS: We have had a very biologically provincial view towards fungi and it is a form of biological racism, what I call ‘mycological myopia.’

MOTYLEWSKI: Many Americans, he says, associate mushrooms with infection and decay, not with strength or cure. Stamets traces the view to the English and Irish who first settled here.

MOTYLEWSKI: But Stamets points out people across cultures and across time have identified certain mushrooms as great medicine. From the first century Greek physician Diascorites, who called the Agarikon mushroom a cure for consumption, to Himalayan Sherpas who drink reishi tea to prevent altitude sickness, to Fungi Perfectae’s own customers.

STAMETS: There is a Cedar fever, a real common allergenic reaction in Texas, for instance. We have a whole group of people down there who swear now by our reishi extracts because these symptoms have been totally alleviated.

MOTYLEWSKI: Dr. Gregg Plotnikoff is one of a few American researchers who are now studying these compounds. He’s an associate professor of Clinical Medicine and Pediatrics at the University of Minnesota. He calls three decades of Asian mushroom science very exciting, but says we need studies of our own.

PLOTNIKOFF: In the United States what the scientific and academic community demands are randomized, double-blind, placebo controlled, multi-centered U.S. trials in order for something to become the standard of care.

MOTYLEWSKI: And this is beginning to happen. Dr. Plotnikoff is testing a number of mushroom extracts for their effects on cancer cells in the laboratory. Memorial Sloan-Kettering Cancer Center in New York is looking at Maitake and breast cancer, both in the lab and in people. And Research Triangle Institute in North Carolina is screening 10,000 fungi species for anti-cancer agents. Dr. Plotnikoff suspects some mushrooms do have drug potential, but he says we don’t have the whole picture, even on time-tested species such as Ling Zhi – what he calls reishi. It’s not clear just how Ling Zhi works in the immune system, and he worries about the possible downside.

PLOTNIKOFF: We know that it increases pro-inflammatory forces – we call them interleukin one, six, eight, tumor necrosis factor alpha. These are nice things to have around with infections and with tumors.

MOTYLEWSKI: But they also tend to promote heart disease, osteoporosis, and may increase the risk for diabetes.

MOTYLEWSKI: Meanwhile, is it safe to take mushroom supplements for overall health? So far, studies of Ling Zhi have confirmed that traditional uses at low doses are safe. Still, Vivian Zhang at the New England School of Acupuncture warns people with any particular health problem to consult a qualified herbalist. Greg Plotnikoff is even more cautious. He’s concerned that self-prescribers could unwittingly tip their immune systems out of balance.

PLOTNIKOFF: My worry is that people are going to hear about the exciting potential in mushrooms, and rush out and make it like the next St. John’s Wort: ‘More is better.’ Well, actually right at this point, more data is better.

MOTYLEWSKI: It’s not clear when the whole story of mushrooms and immune function will emerge, but results from the cancer research are expected in a few years. For Living on Earth, I’m Kim Motylewski.