Tigers around the world are threatened with extinction. In Thailand, there’s a conservation effort to save the Indochinese tiger. Orlando de Guzman reports.

CURWOOD: Welcome to an encore edition of Living on Earth. I’m Steve Curwood. It is illegal to hunt or sell tigers anywhere in the world, and yet three tiger species are already extinct. And in most places the majestic animal’s future is threatened. But Thailand provides a bright spot. There, a movement is under way that is raising hopes for survival of the nation’s remaining wild tigers. Orlando de Guzman reports.
[JUNGLE NOISES]
DE GUZMAN: One of the least explored rain forests in Southeast Asia can be found here, at Kaeng Krachan National Park. This is Thailand’s largest preserve, and it straddles the Tenasserim mountain range that divides Thailand and Burma.
[WATER SOUNDS]
LYNAM: We’ve going to raft on the river about 30 kilometers and we’re going to stop off at a number of different places along the way where we see sandy banks, and there are a couple of salt licks along the way too, and we’re going to check out the signs of large mammals that are in the area.
DE GUZMAN: Dr. Tony Lynam is a tiger biologist with the New York-based Wildlife Conservation Society. He’s been conducting the first surveys of Indo-Chinese tigers in Kaeng Krachan in ten years.
LYNAM: Kaeng Krachan is one of the most remote wilderness areas in the whole of Southeast Asia. It’s like no other place. When you come in here, you sense a feeling of awe, because there are no people here. And we’re just starting to scratch the surface of looking at the wild life.
DE GUZMAN: Kaeng Krachan is home to several species of carnivores including leopards, civets, wild dogs and two species of bear. The park also supports several herds of elephant, wild cattle and hundreds of bird species. For the most part this 1,800 square mile park is untouched by poachers and hunters because it’s so remote. Great sections of Kaeng Krachan are only accessible during the dry season, from December to April, when the risk of acquiring a deadly strain of malaria is low and when the park’s rivers are tame enough to explore by raft.
[LOUD WATER SOUNDS]
DE GUZMAN: We’re off, down the Petchburi River, which tumbles and meanders through dense rain forest.
[WATER SOUNDS]
DE GUZMAN: Two hours down the rapids, we stop to rest next to a boulder tossed against a sandbank. Immediately, Dr. Lynam spots the unmistakable tracks of a tiger, large paw impressions about five inches across. 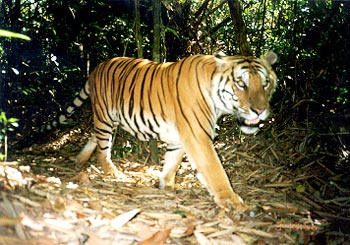 LYNAM: Look at this. This animal has come up here and it’s walked back the same way. See that? It’s walked up here, it’s walked back, walked up here, walking back. The tigers are probably moving from that side of the river, swimming across this deep channel, coming up here along the bank and walking along, maybe going all around this bend, here and way down the stream. So they do swim, and they’re probably swimming across the river and just crossing the channel.
DE GUZMAN: During the dry season, the Petchburi River becomes the main highway and feeding ground for tigers in this park. Many of the higher mountain streams have dried up. Tigers and their prey come down here to drink. In January, Dr. Lynam set up 41 camera traps around the 21-mile stretch of the Petchburi River and captured photos of four tigers. That’s the most he’s ever photographed in one survey. Dr. Lynam believes Kaeng Krachan could be supporting as many as 50 tigers, potentially one of the largest tiger populations in Southeast Asia.
LYNAM: If we have the opportunity to extend our surveys to other parts of the park, I think we’re going to find more tigers. We’re going to find that this area supports a thriving population of tigers. That’s what all the evidence suggests so far.
DE GUZMAN: This is encouraging news. The Indo-Chinese tiger, the subspecies that’s found here, is facing extinction throughout Burma, Laos and Vietnam, despite international conventions that outlaw the sale and trade of tigers.
[TEMPLE MUSIC]
DE GUZMAN: A forest temple in Kanchanaburi province, about 100 miles west from the capital city of Bangkok. According to Buddhist tradition, temple grounds are sacred and it’s a sin to harm animals living around monasteries. For this reason this temple has become a refuge for tiger cubs rescued from poachers working along the Thai-Burmese border.
[SOUND OF TIGER]
DE GUZMAN: This two-year-old male tiger, Pai Yo, was rescued by Thai border police a year and a half ago. Pai Yo lives with seven other tigers at this temple.
[SOUND OF TIGER]
DE GUZMAN: They’re kept in cages no larger than a one-car garage. All the tigers here have become domesticated, relying on the monks for food and daily walks around the temple. Luang Ta Jan, the abbot of this temple, says it’s becoming difficult to take care of the cubs especially now that they’re getting bigger.
[TA JAN SPEAKING THAI]
VOICEOVER: Some of the villagers around here are poachers, and sometimes they will bring the tiger cubs to us after they have shot and killed its parents. The poachers believe that by giving us the cubs to take care of they will be forgiven of their sins. These tigers won’t be the last to come here. As long as the poaching continues, we will have more and more tiger cubs ending up at our temple.
DE GUZMAN: In the illegal wildlife market, just about every part of the tiger has some value. Tiger bones are much sought after in traditional Chinese medicine, where it is ground up and made into treatments for rheumatism. There’s no scientific proof that this remedy is effective, nor is there any evidence that eating other tiger parts, such as the penis, scalp or claws, can increase sexual virility in men. Steve Galster is the director of WildAid, a U.S. organization that monitors the trade in exotic animals.
GALSTER: If you look at how much money tiger bone is fetching on the black market, you then start to understand why people are going after it. You know, we’re talking $300 per kilogram in some cases, plus you’ve got the bones, the whiskers, the penis, the skin. After you shoot a tiger and kill it, market it, wholesale it, you might get ten to even 30 thousand dollars for the animal.
DE GUZMAN: The demand for tiger body parts and the high price they fetch in the black market have created highly organized criminal rings around Southeast Asia. Poachers often cross international boundaries. Tigers hunted in Laos may end up in Vietnam or China. Steve Galster says these poachers are one of the biggest threats to tigers in the region. 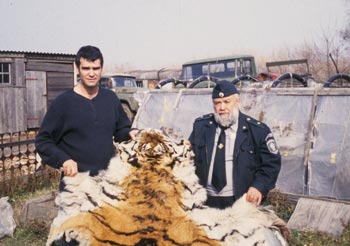 Steve Galster (left) of WildAid monitors the trade of wild animals in Thailand and all over the world. The above photo was taken in Russia. (Photo: Global Survival Network)

GALSTER: Definitely the trade in tigers is organized. I mean, this has been going on for a while. You take a look at Burma where there used to be a lot of tigers, you’re doing surveys now there through WCS, they’re finding there’s very few left. They’ve cleaned them out. And you’re talking about forests where they still have other animals. These are precision hunters. They went in, they cleaned out the tigers, because there was a trade.
DE GUZMAN: While the black market for tigers is a significant threat, biologist Tony Lynam of the Wildlife Conservation Society has been documenting another, possibly more damaging, threat to tigers in the wild. What’s going unnoticed and unchecked is that tigers are being starved out of the forest.
LYNAM: The threat that is really knocking out tiger populations all over the country – and this is not just isolated to Thailand, it’s also something that’s happening in neighboring countries – is the hunting of animals that tigers eat, the prey species, the sandbar, the wild boar, the gaor, other species of animals that make up the tigers’ prey. That’s happening at a very alarming pace and it’s not being controlled, for the most part, in most areas. 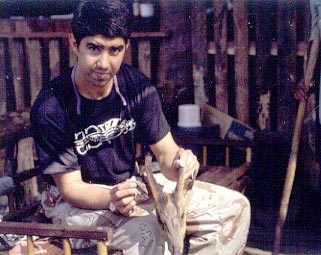 [BIRD SOUNDS]
DE GUZMAN: At Thailand’s oldest and most famous national park, called Khao Yai, in central Thailand, a more aggressive anti-poaching program is under way. Here, a recent survey by the Wildlife Conservation Society has found that tigers are almost extinct in the park, and their prey species are being hunted by poachers.
[SOUND OF WALKING THROUGH BRUSH]
A team of five rangers from the Thai Royal Forestry Department wade through chest high razor grass deep inside Khao Yai, in search of poachers. But these aren’t ordinary park rangers. They’re armed with high-powered assault rifles, global positioning systems and long-range radios. These rangers are being supported by WildAid and the Wildlife Conservation Society and trained by the United States Fish and Wildlife Service. Chonpon Sayadan, the leader of this patrol, says looking for poachers is a very dangerous job.
[SAYADAN SPEAKING THAI]
VOICEOVER: The reason why we have to carry guns is to protect ourselves, so that if we meet people who are going to use force against us, we can return fire. Two years ago, we ran into a group that was armed with automatic rifles, AK-47s, and they shot and killed one of our officers.
DE GUZMAN: Before the patrol started, officials estimated there were between 300 to 500 poachers in Khao Yai at any given time. Now poaching has been disrupted and poachers have retreated into the more remote areas of the park, beyond the reach of the rangers. Officials say it’s impossible to patrol the entire park, but say they’ve managed to reduce poaching significantly. But despite the program’s apparent success, there are fears that it may have come too late for Khao Yai’s tigers. For the past two years, Dr. Lynam of the Wildlife Conservation Society has been setting up camera traps and looking for tiger tracks inside Khao Yai. What he’s found is alarming: all evidence suggests there are fewer than 10 tigers left at Khao Yai.
LYNAM: So what it suggests to us is that tigers are really quite endangered here; tigers are on the verge of extinction in this park.
DE GUZMAN: Even if efforts to save these few remaining tigers prove to be too late, conservationists hope that by improving the way this park is managed, Khao Yai can serve as a model – and warning – for other parks in Asia trying to save their endangered tigers. For Living on Earth, this is Orlando De Guzman, Khao Yai National Park, Thailand.
[BIRD SOUNDS, JUNGLE MUSIC]