TOOMEY: And you’re listening to NPR’s Living on Earth. Forestry experts at the University of California say the same pathogen that’s killed tens of thousands of California oaks, is now infecting Redwood trees and Douglas fir, the Northwest’s most important source of lumber. From San Francisco, Deirdre Kennedy reports.

KENNEDY: In a shady grove at the University of California at Berkeley, forest pathologist, Dr. Matteo Garbelotto carefully examines tiny Redwood samplings for signs of attack by an epidemic tree killer.

GARBELOTTO: The symptom shows itself as a discoloration of the needles. And eventually the whole needle becomes brown and the infection can proceed into the twig, and then the twig itself can become girdled.

KENNEDY: Once the pathogen girdles, or chokes off, the twig from its nutrients, it dies. Tens of thousands of oak trees have fallen prey to the disease, but Redwoods are virtually indestructible, and are holding their own, losing mainly needles and new sprouts. Professor Garbelotto says the pathogen is actually a type of green algae and a distant relative of the microbe that caused the Irish potato famine. It thrives in cool, moist areas, finding a perfect environment in the coastal forests of California and the Pacific Northwest. The pathogen can infect a tree in a matter of hours, says Garbelotto.

GARBELOTTO: Especially if it’s very foggy and moist and wet, it will produce spores that are shaped like footballs, but very, very tiny. And they will be picked up by strong winds, and they will be splashed, if it rains, on leaves of neighboring trees. We don’t know how far they can be splashed.

KENNEDY: That’s sending a shudder through Oregon, Washington and British Columbia. California Governor Gray Davis has asked the Bush administration for $10 million to contain the problem. And forestry officials are particularly worried about what could happen if Sudden Oak Death takes hold in one of the Northwest’s most profitable trees, the Douglas fir. Rod Nichols is a spokesman for the Oregon Department of Forestry. 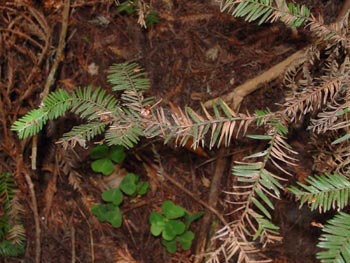 NICHOLS: Oregon exports about $7 billion in wood products each year, and Douglas fir makes up the lion’s share of that. Sudden Oak Death doesn’t appear at this stage to kill Douglas fir trees, but even if it just slowed their growth, that would have a tremendous impact economically.

KENNEDY: In the hundreds of millions of dollars, says Nichols, including the cost of Oregon’s Christmas tree exports, the biggest in the nation. Researchers are testing mild pesticides on the spores, but they don’t know yet whether large scale spraying is practical. Timber officials say for the moment they’re confident that quarantines will prevent Sudden Oak Death from spreading. They say the public can help by not moving soil, wood products or host plants like bay leaves, rhododendrons or huckleberries from infected zones. For Living On Earth, I’m Deirdre Kennedy, in San Francisco.