On October first, diesel engine companies must meet new emissions standards or face stiff penalties from the EPA. Anna Solomon-Greenbaum reports from the headquarters of Cummins Inc. in Columbia, Indiana on the technology and politics of making engines cleaner.

CURWOOD: Welcome to Living on Earth. I’m Steve Curwood. On October 1st, all new engines that power big rig diesel trucks will have to meet new emission standards for nitrogen oxides or NOX, a major smog-producing pollutant. It’s been a bumpy road for diesel engine- makers trying to beat the government’s deadline. And not all are there yet. But, the folks who make the Cummins Diesel in Columbus, Indiana were the first to certify an engine that meets the new standard. Living on Earth’s Anna Solomon-Greenbaum reports on what it took to get there.

SOLOMON-GREENBAUM: The giant plant where Cummins, Inc. builds its engines feels a little like an over-sized toy factory. It’s clean and well-lit, with lots of primary colors. And it’s surprisingly quiet. In one corner, behind a wall of Plexiglas, engines are getting their finishing touch, two coats of bright red paint.

OSBORNE: Right now, we’re doing the first coat. The first robot’s painting the back of the engine; the other one is doing the bottom.

SOLOMON-GREENBAUM: John Osborne directs operations here. The robots he points to look like giant black ostriches, continually sneezing red from their noses. Their heads bob and swivel while the engine hangs patiently from chains. Then it’s pulled over to a second set of robots for another coat.

OSBORNE: The system knows what the engine is. The robot knows if it’s a high turbo or a low turbo, so it’ll know how to react to that and get the paint on properly.

SOLOMON-GREENBAUM: That could be important come October 1st when the robots will be dealing with a new engine. That new engine will have a few extra parts that need painting. Those parts will cut emissions of nitrogen oxides, or NOX, down to almost half of what a current diesel engine produces. Of course, painting the new engine is the least of Cummins’ challenges. The company has spent many years, and over a billion dollars, developing the technology to meet EPA’s new emission standards. It’s called cooled exhaust gas re-circulation, or cooled EGR. And it’s been designed and honed here in Cummins’ technical center where engines and test cells run around the clock. 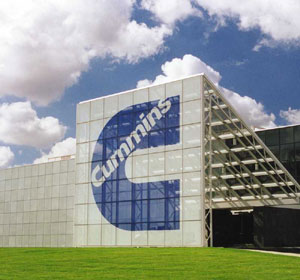 (SOUND OF DOOR OPENING AND AN ENGINE RUNNING)

SOLOMON-GREENBAUM: At its most basic, cooled EGR works by bringing the engine’s exhaust back into the engine at a cooler temperature. The overall effect is cooler combustion which produces less NOX.

HAEGELE: Let me walk you over here first.

SOLOMON-GREENBAUM: Glen Haegele winds through workstations and computer banks over to the lab where he and other technicians monitor what’s coming out of the engines.

HAEGELE: The engine exhaust is diluted into a tunnel, and then these gray gas analyzers give you a real time measurement of the NOX and the hydrocarbons and the CO, all the gaseous elements that come out of the engine. And then, of course, we can’t be above a certain level.

SOLOMON-GREENBAUM: The new engines have spent over a hundred thousand hours in test cells. They’ve traveled six million miles on the road in field tests. The challenge isn’t simply reducing their NOX emissions; it’s reducing NOX while maintaining the engine’s power and durability. Haegele walks over to a cart that’s loaded with black, greasy parts.

HAEGELE: This is the guts of the engine.

SOLOMON-GREENBAUM: After testing, the engines are broken down, part-by-part. All 260 of them.

HAEGELE: This is probably the most critical thing we do after the test. After we’ve measured all the parts and we’ve cleaned them all up and laid them out, all the engineers come down and review their parts.

SOLOMON-GREENBAUM: This is how they know what will last and what won’t, which materials work, and which don’t. The idea, says Glen, is to make the transition to the new EGR engines as painless as possible for the people who use them.

HAEGELE: Ideally, we have an engine that the customer would never know there’s anything different under the truck than what he had a year ago.

SOLOMON-GREENBAUM: But even if the new engines run as hard and fast as their predecessors, truck companies will notice the difference. Not only will the engines cost more up front; they’ll cost more to run because they’re less fuel-efficient. That’s because while NOX is reduced under cooler conditions, fuel economy is best when combustion is hotter. Cummins estimates trucks with EGR engines will see their gas mileage drop by three to five percent. For a truck that often travels a quarter million miles in a year, that’s a lot of extra gas. And for truck companies, it’s a lot of extra money.

VUJOVICH: I think the most difficult thing is something that we have all wrestled with. And that is, serving the two masters.

SOLOMON-GREENBAUM: Tina Vujovich is VP of environment at Cummins. The two masters she speaks of are the EPA and the truck companies, who are so nervous about the cost and technology of the new engines, they’ve ordered a surge of the pre-EGR engines to be built before the October deadline.

VUJOVICH: Unfortunately, we weren’t able to satisfy both masters at the time that this product gets launched. We have a great performing product. It’s going to cost our customers, however. And it’s been difficult. There have been many times where, I believe, employees would have rather just dropped the ball and said, "Let’s figure out a way to make this go away."

SOLOMON-GREENBAUM: That’s what Cummins’ competitors were still doing as of just a couple of months ago: lobbying Congress to push the administration to roll back the deadline, or, at least, to lighten up on the penalties for non-compliance. But, the EPA held firm. And except for Caterpillar, the other engine-makers say they’ve got an engine ready to build on October 1st. Vujovich is a big amused at the other companies’ attempts to evade the new standards.

SOLOMON-GREENBAUM: That seems to be the general attitude at Cummins. Not exactly eagerness, but determination to do what it committed to. In the tech center, and at the plant, employees know what it is they’ve been working towards.

INGRAM: I think it’s wonderful. Like I say, I helped build this line, so I’m pretty proud of it.

SOLOMON-GREENBAUM: Alan Ingram is holding a camera and standing next to one of the brand new EGR engines. He says he’s making something called "line art." 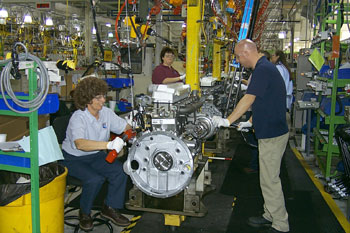 Inside a Cummins factory.

INGRAM: It’s got all the how to put the pieces on, how to torque them, any special lubricants or special procedures you’re supposed to go through.

SOLOMON-GREENBAUM: Ingram’s photographs and text will become a step-by-step booklet for employees on "the line" as it’s called, as they put the new engine together. He says there are a few new parts to deal with, but that it’s worth it for cleaner air.

INGRAM: Our next version of this, you could stick your mouth on an exhaust pipe and breathe the air coming out of it. (LAUGHTER IN BACKGROUND) Yeah, it’s supposed to be that clean.

SOLOMON-GREENBAUM: It may be a bit premature to recommend taking a sip from that 18 wheeler parked at the rest stop. But Ingram is right, emission standards are only getting tougher. By 2007, engine makers will have to cut not only more NOX, but sulfur dioxide and particulate matter, too. Most likely, that will mean some new parts will need painting.

For Living on Earth, I’m Anna Solomon-Greenbaum in Columbus, Indiana.