We hear a lot about the loss of family farms, but less about those that are making it. Some of their struggles are not financial, but familial. Robin White provides a view from inside.

CURWOOD: We hear a lot about the demise of the family farm and it’s true that corporate agriculture owns most of America’s farm acreage. But if you look at the numbers of farms, 98 percent are still owned by families, according to the federal government. That means from Omak, Washington, to Swainsboro, Georgia, perhaps two million people wake up each morning and step outside to work with their sons, daughters, brothers, sisters, mothers, fathers, husbands and wives. We don’t often hear about their struggles, but for two years, Robin White has been following a farm family in California where the stress that comes from working with your relatives is pretty close to the surface.

WHITE: When Ted Bucklin returned to the tight fields of vegetables and flowers at Oak Hill Farm in Sonoma County, he knew nothing about running the place. He was studying for a Master’s in Social Work when he got a call from his mother. His stepfather had died and the family was deciding how to run the farm. It sits under an oak-covered mountain in the heart of the wine country.

WHITE: Pretty soon, Ted found himself supervising 13 employees, some of whom had been on the farm half his life.

BUCKLIN: Well, this is Chuy Soto. Chuy’s been working at Oak Hill Farm for 20--how many years, Chuy? Twenty-two years.

WHITE: In the cutting room, three men are clipping the ends off flowers and tying them into bunches. Ted introduces them by full name, and then he points up.

BUCKLIN: If you look on the ceiling, you can see all the statice and corn and different flowers that we dry, going upstairs in the barn here you can see more flowers, and then there’s boxes of flowers. And so, year round we’re always sort of chasing after this rainbow of stuff that’s growing on the farm.

WHITE: If Ted Bucklin sounds a little overwhelmed, it’s probably because he’s had to learn the business quickly and he’s made some big mistakes. His mother hired him. He may not have been the best man for the job, but family farmers often put family ties first, especially when they’re short of cash. When Ted took over, the farm was losing $60,000 a year. He increased efficiency and fired some long time employees.

BUCKLIN: That’s the hardest thing I’ve had to do. We’re talking about families that lived on the farm for 15 to 20 years, children who were born on this farm who had to move. This was their home. Ugh.

WHITE: The firings led to protests among the employees. Out in the fields, Chuy Soto is in charge. Chuy says Ted tried to move too fast.

SOTO: At the beginning it was kind of hard. He wanted this place to change dramatically and he thought it would be changed [SNAPS] like that. I’d say, "Well, you know, it’s not going to happen just suddenly." Yes, we have hard times. I’ll tell you, once or twice I was ready to quit because we couldn’t communicate.

WHITE: Ted was risking one of his best employees. But it wasn’t just the workers who were upset. Some of the customers at the farm store were friends of the fired workers. In this small agricultural county, everyone is tied to everyone else and word got around. It was so unsettling that pretty soon Ted’s own job was on the block.

BUCKLIN: Hello, Mother. Can I come in about 15 minutes?

Mom has been to the point of such dissatisfaction with me that she fired me and I just refused. I said, "No way, and you’re a fool for trying to." And since then, I’ve actually convinced her that she was wrong.

TELLER: We have made a lot of mistakes. Some of the mistakes we’ve made together and some of them we’ve made in opposition to one another. And I’m sure it’s true in any family. You know, blood and money doesn’t always mix.

WHITE: If you spend any time in farming communities you start to hear stories of brothers who farm next to each other, but don’t speak anymore because of old arguments. And it’s not uncommon for older farmers to have trouble letting go of the reins. Steve Schwartz is with Farmlink, a Sacramento organization which helps farmers transfer property to the next generation.

SCHWARTZ: The best story I think was a dairy farmer. And he said, "You know, myy son, I’m really looking forward to him taking over the farm. He’s a great dairyman. He’s good with the cows. But he’s just not good with the books. So he’s really not ready to take over the farm yet." So it turns out this farmer is 87, and his son is 65.

WHITE: Schwartz says poor communication is all too familiar for families working together.

SCHWARTZ: We talk to a guy who literally had a 45 second conversation with his mother 15 years ago and she said, "I don’t think there’s room for you here." And he took that to mean, "I better go move off soon and take my family and rent somewhere and do my farming elsewhere." And that’s not exactly what she meant.

WHITE: Chuy Soto understands the differences between things said and things understood. The workers he manages at Oak Hill Farm are his own relatives, another family on this farm. He likes the confidence of hiring family, but sometimes he has to say hard things.

SOTO: If we take this outside of work, it can be tough. He’s my uncle, he’s my cousin, he’s my brother-in-law. And sometimes if I am hard on them, for whatever reason, I go out there and apologize--"this is work related and don’t take it personal."

WHITE: If disputes are allowed to rankle, it sometimes takes a long time to get over them.

WHITE: One farming family with a lot of history is the Hansens of Selma, California. On a walk around his peach orchid, farmer and writer Victor Hansen points out an old white hay barn.

HANSEN: Barns are kind of strange. I see them all over. There’s one over there. They have no shape that’s of any value.

WHITE: There are no draft horses needing these hay these days, and the barns are no longer much used, but people still hold onto them. It’s the same with family feuds. Back in his old farmhouse, Victor tells of grudges that went back four generations.

HANSEN: I was told that when my great, great grandmother died, this must have been about 1877, one of the brothers walked into this very house and hadn’t seen her for 30 years, and stripped all of the rugs out of the house and then demanded his land. I have no idea if that’s true, but my side of the family told me that and I was not to like that side of the family.

WHITE: A few years ago, Victor made his own brother angry by writing a book about their farm. His brother found the book too close to the bone and the men didn’t speak for two years. Only later the brothers began talking again. They still have things in common.

HANSEN: One hundred twenty years on a farm. There’s depressions, there’s war, there’s people who have been killed. There’s incidents like that, and they come and go.

WHITE: Back at Oak Hill Farm, things have also come full circle. Ann Teller has, more or less, stepped down. And, one by one, Ted’s brother and his sisters have returned from living across the country. Together, they’ve launched a new venture. They’ve always grown grapes, but they used to sell them to Ravenswood who’d turn them into a famous zinfandel. Now, the Bucklins have decided to make their own wine

BUCKLIN: This is our first bottling and we sort of have it down. We’re having fun. I’m really enjoying this. Yesterday, we made a thousand boxes. It’s kind of fun being part of a family machine.

WHITE: Will Bucklin is the vintner. Kate and Arden and their friends are also here giving up their weekend to bottle the new wine.

ARDEN: I’m a sister. I’m the member of the family. There are four of us.

WHITE: They’re four of you. So, you’re the last…

ARDEN: Well, I’m actually the second, if you must know. Will is the last.

WHITE: And Ted is the oldest?

MAN: We do whatever Ted tells us to do.

WHITE: The cap on the new wine bottle is inscribed with "B4", for the four Bucklin siblings. Kate Bucklin says, most families are not as close as they are.

KATE: We’ve really grown as a family. Whereas, I don’t think most families have that opportunity to really go through and, one-by-one, knock off the big problems. 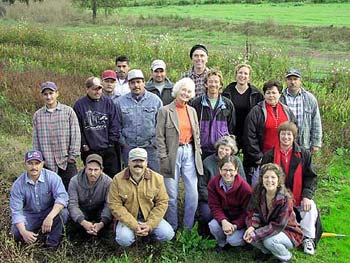 WHITE: The farm ties the family together. And for all the hardships, the Bucklins and the Hansens say, they wouldn’t do anything else.

For Living on Earth, I’m Robin White in Sonoma.