Many of the famous features that draw people to America's national parks are in a sorry state of disrepair. They're remote--expensive and even dangerous to fix. Sandy Hausman reports from the sweeping heights of Glacier National Park in Montana.

CURWOOD: While he was running for president, George W. Bush pledged nearly five billion dollars to repair the nation’s parks. And this year, Congress is debating a big increase for long needed maintenance. To assess the need, we sent reporter Sandy Hausman to Glacier National Park in Montana, a million acres of snowcapped mountains, deep green valleys, and clear, cold streams. You might call it calendar country. But, observers say it’s also a poster child for the Park Service--proof of serious, even dangerous, neglect.

RANGER: How are you?

MAN: Yes, that’d be great, if we could get a brochure.

RANGER: Here’s a newspaper. Our visitor’s center is in Apgar, two miles ahead.

MAN: Okay, thank you very much.

RANGER: Sure, thank you.

HAUSMAN: Every year, nearly one and a half million Americans drive through Glacier National Park on a remarkable 50 mile road built in the 1920s and ’30s. The Going-to-the-Sun Highway is considered an engineering marvel. It clings to the side of the mountain, rising from 3000 to 6600 feet above sea level to cross the Continental Divide. 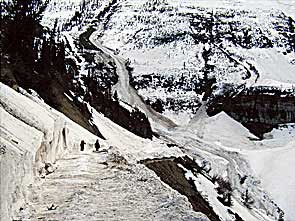 Building this road was such dangerous and delicate work; it probably wouldn’t be done today. But, 21st century visitors are glad it’s here. Greg Myers stopped to admire the view after driving in from Madison, Wisconsin on his Harley.

MYERS: Definitely worth the 2,000 mile trip just to go up and down that hill once, put it that way. This is the second time we’ve taken it. And, it’s gets better every time. You got to remember to watch where you’re going, as well as watch the mountains. Otherwise, you end up in trouble.

HAUSMAN: Right off the edge.

MYERS: Right off the edge.

HAUSMAN: Visitors here sometimes see big horn sheep, mountain goats and grizzlies. Park literature warns tourists of the potential risk posed by bears. But there is no warning about what may be a more serious threat to public safety.

HAUSMAN: Water is everywhere, eroding the ground under this road and setting rocks free above it. Several years ago, a Japanese tourist was killed when a boulder fell on his car. And Fred Babb, chief of project management at Glacier, says the risk is constant.

BABB: Everyday the Park Service has one gentleman that goes the entire length of the road just sweeping stone off the road. If he didn’t do that, in a matter of a week, the sections of the road would be completely covered by stone, and not passable.

HAUSMAN: Snow is also a problem during Montana’s long, cold winters. Steve Thompson, local program manager for the National Parks Conservation Association, leans over a cliff and stares at a pile of rocks below.

THOMPSON: Looks like there was probably an avalanche that came through there not too long ago, and just took that retaining wall right over the edge.

HAUSMAN: So, in the summer and fall, crews are busy restoring the road.

HAUSMAN: About a mile below the highway summit, two men are standing on a platform hanging over the edge of a cliff, suspended from a crane. Construction worker Bruce Wann says they are replacing the mortar in the guard wall. And this is the only way to reach it.

WANN: And then we got guys on the ropes to keep them from swinging around if the wind comes up, which it does up here. And the other hazards we have to deal with are lightning. The crane is a giant lightning rod. And if we get a lightning strike in the area, then we have to shut down.

HAUSMAN: All total, six men will need about a month to fix 150 feet of wall. One stretch of wall in one national park, one reason why park repairs can be costly.

[SOUND OF LOBBY IN MANY GLACIER LODGE]

HAUSMAN: Near the end of the Going-to-the-Sun Road, on the east side of Glacier, stands a historic lodge named for the surrounding ice and snow. The Many Glacier Hotel, with its large friendly lobby, is one of the three chalets built by the Great Northern Railway to attract park visitors.

In 1915, when the hotel opened, it was a bastion of elegance for the adventurous traveler willing to make the trek by train and horseback. Today, the lodge draws as many as 700 guests a night from around the world. But manager Don West says some are disappointed by conditions here.

WEST: Last year, at this time, if you were to walk down the hallway, you would get vertigo because it was so much slanted in--it was falling into this lake.

HAUSMAN: Money for repairs finally arrived after members of Congress held a hearing in the lodge and saw the slanted hallway’s peeling paint and frayed carpets. But Congress has not yet funded road repair. That’s a tougher sell, says Steve Thompson.

THOMPSON: You know, when people come to visit the park, they’re focused in on the beauty of the park. And they want to see a bear. And, they’re not thinking about, you know, sort of what makes it all run. The backlog of basic maintenance projects, such as the Going-to-the-Sun Road is about $5 billion dollars.

HAUSMAN: That’s why his group has joined with local Chambers of Commerce, national environmental groups, service organizations, even the Girl Scouts, to form a parks advocacy group--Americans for National Parks.

But some people don’t share their view that Congress should pay to keep the parks in good repair. Instead, economist Randal O’Toole thinks the Park Service should raise admission fees, charging per person, per day. Right now, visitors pay just $10 per car per week at Glacier.

HAUSMAN: He also thinks the Park Service should be more selective about acquiring new buildings and property. For example, when the giant Presidio Military Base in San Francisco was given to the Park Service, it came with about 500 historic buildings and manicured grounds that are extremely expensive to maintain.

O’TOOLE: It’s nice to have that 1,480 acres. If you live in San Francisco, it’s essentially a city park, enhances the property values of people in San Francisco. But it doesn’t really benefit people anywhere else in the country.

HAUSMAN: O’Toole calls this "park barrel" and refers to the National Pork Service when he suggests that no tax dollars be used to fund places like Glacier and the Presidio. As the debate continues, Congress is set to approve about $130 million dollars more than the Clinton administration did to reduce the maintenance backlog. That does not include major roadwork. Congress will look at that next year when it considers funding for the nation’s highways.

But with some Montana clout on the Senate Appropriations Committee, Glacier is hopeful that money to rebuild the Going-to-the-Sun Highway will come through in 2004.

For Living on Earth, I’m Sandy Hausman in Whitefish, Montana.