If you are thinking of building your own home, but afraid of the expense and contractor nightmares, then think about having your friends help you build it. That’s what one couple did in upstate New York. Peter Thomson tells us how it all came together.

CURWOOD: If you're looking for a brand new home these days, you could look in a showroom, or a catalog, or even online. For the most part, new houses are commodities, no different than cars or computers. They are built by people who will never live in them. But once in a while, a house is built in a way that hearkens back to a time when people relied more on community than on the market. Producer Peter Thomson recently found himself involved in such a project.

THOMSON: I'd seen my friend Stefan only once in the last dozen years or so, and maybe only three or four times since he moved away when we were 14. But I'd always missed him, and I finally tracked him down to invite him to a big party I was having.

I got an almost instant reply. "We'd love to come." But before my party, he was having one of his own. "We've bought a piece of land outside Ithaca," he wrote. "We're having a house raising party. Want to come?" Ithaca is 400 miles away from my house in Boston, and I can't remember the last time I touched a 2 by 4. But I knew I had to be there. The plan was to raise the house from the foundation to the roof in three days.

THOMSON: It sounded ambitious, but when I arrived late in the first day, the walls of the first floor were already up.

LIZ: It's happening. There was no house here this morning. It's like time-lapse photography. 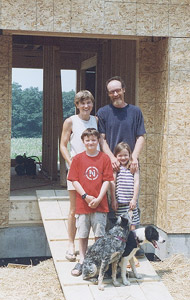 THOMSON: Liz is Stefan's wife. We stood before a swarm of activity; a human anthill rising up between a patch of woods in a big, empty upstate New York cornfield. Thirty or so people were sawing boards, hauling lumber, taking measurements, firing nail guns like pistols at a carnival midway, all to the beat of a classic rock soundtrack. Before long, I spotted Stefan amid the swarm as well. He'd grown a beard since I'd last saw him, and was roaming the site in what seemed an almost ecstatic state – a kind of focused frenzy. He looked like some sort of shaman.

THOMSON: Like I said, we hadn't seen each other for years, but this was no time to catch up. He put me right to work with a bunch of other guys.

THOMSON: How are you doing?

TIM: How are you?

JOHN: Here is the job.

STEFAN: We've got to get all of the plywood, all of that plywood onto those horses. The lines facing out, and up.

STEFAN: So work in pairs.

THOMSON: We set to work stacking sheets of plywood on saw horses next to the house. Another crew hauled the boards up above our heads, where they would become the walls of the second story. Around the corner, still others were framing a mudroom.

THOMSON: A good deal of the group seemed to be greenhorns like me. It felt like a fantasy camp for novice builders.

THOMSON: But some people clearly knew what they were doing. The house was going up fast, and they were all working for free. At every turn I was introduced to somebody new.

THOMSON: Nice to meet you.

It went on like that all weekend. I was working alongside a bunch of people I'd never met, building a house for people I hadn't seen in years, in a place that I'd never been. And it seemed that others here had a similar story. What united us were only our ties to Stefan and Liz. There were old friends of theirs from Boston, family from Canada, DC and Massachusetts, local friends and colleagues, and new neighbors from across the street. The disparate threads of 40-plus years of Stefan and Liz's lives were being wound together into one single strand, for one weekend, for this one purpose: building their family a house, and helping to bring them home.

THOMSON: This part of the story, about home, as well as a house, only became clear after I arrived. When he'd invited me, Stefan had told me only when and where, nothing about how this had come about. But over the course of the weekend, he and Liz began to fill me in.

THOMSON: They'd come to Ithaca when Stefan entered grad school at Cornell. Liz says they fell in love with the area and the local community, but that when Stefan finished school, they left.

LIZ: He got a job at the University of Michigan two and a half years ago, and we went out, and realized pretty quickly that for us it was a mistake. We really – we missed being here.

THOMSON: Sometimes a place beckons you back when you leave. Liz and Stefan, and their two young kids heard the call of their place, but at first they didn't feel able to respond.

THOMSON: Stefan had a good job in Michigan, but no prospects for anything like it back in New York; nothing that could support buying or building a house.
But as they tell it, this place wouldn't take "no" for an answer.

THOMSON: A year or so after they left, they returned for a friend's anniversary party.

LIZ: At this party, this whole incredible series of conversations took place, in which someone told us about some land that was for sale. Someone else offered to lend us the money to buy it. Jeff Lange who's here this weekend, who is a builder who has done a lot of work with Habitat for Humanity said ‘well, if you buy that land, then I'll help you build your house. We'll have a house building party.’

THOMSON: Stefan says it was a remarkable moment.

THOMSON: So how could they refuse? Before long, Stefan and Liz had used their friend's loan to make an offer on the land, cast their fate in with the depressed economy of upstate New York, and set to work planning to build their house, relying in large part on the donated labor of friends and family.

THOMSON: And a year later, the limb they'd gone out on was starting to bear fruit. By sundown of the first day, the second story was well underway, and by the end of day two, the rafters were up. The labor was demanding. The pace was frenetic. And before the weekend was over, much of the crew had worked itself nearly into a delirium. Stefan in particular was past the point of exhaustion, and his shaman spell began to break.

Near the end of the final day, Stefan shot himself in the wrist with his nail gun. Amazingly, the nail missed the tangle of veins and tendons, and just hung there, limply. But it was enough of a warning. Stefan realized it was time to slow down. But the work continued. And by the end of the third day, we had finished the roof.

THOMSON: And as we worked through the weekend, people talked about why they'd come, and what it meant to them to be here.

MALE: People used to do this all of the time, and what do you get in return for it? Satisfaction. You get something in return, but it's not tangible, yet, and you don't know what it's going to be. People should do more stuff for free.

THOMSON: So what are you actually contributing to this construction project?

MALE: Oh, I've been hammering nails right beside you all day. Don't you remember? [Laughter]

THOMSON: Oh, that was you?

FEMALE: They're the sort of people who know they can call on friends, because they have been that kind of friend to other people. So you know, when you put the call out, nobody would hesitate. You just put out – well, you've got e-mail now. You can put out the word on e-mail, and bingo bango. If you can't live like that, there is not a lot of point. Not a lot of point.

FEMALE 2: It's very moving. I cried five times yesterday, just watching everybody work together, and getting to know each other, and sitting on the first floor, watching the sun set. A very, you know, warm feeling, that people would come and help.

[SOUND OF DRILL AND SAW]

THOMSON: Something happens when people are joined by a common experience or purpose. They start to know and care about each other in a different way, and the bond lasts far beyond the moment itself. By the end of the weekend, along with the house, a community of sorts, had risen out of the cornfield as well, one which would last even as its members returned to their own far-flung lives. And as long as the house stands, and Stefan and Liz's family live in it, Liz says that community will never quite dissolve.

LIZ: The house is much more than a collection of wood and nails. And you know, if ever a house was borne out of good feeling, this is it. And so there is the changing of this thing from just shelter to, you know, a representative of all of these relationships.

THOMSON: Of course, it wasn't just good feeling all around. Stefan says some people that they invited didn't want to come. They didn't see why they should help build someone else's house for free. But among those who did come, there seemed no question that this was the right thing to do.

The house was nowhere near finished by the end of the weekend, and Stefan and Liz are hiring contractors for the months of work that remain. But the communal effort provided the crucial margin which allowed this family to come home to the place that they love, and it likely won't be the last time that something like this happens around here. The builder who gave birth to the idea that friends could help Stefan and Liz build their house hopes to make it a regular thing in this part of the world.

THOMSON: The community which came together to help create this home won't entirely dissipate either. We've all been invited back for an anniversary party in the finished house next summer. For Living on Earth, I'm Peter Thomson in Mecklinberg, New York.