New York City Mayor Michael Bloomberg is proposing to ban smoking in all restaurants and bars. The mayor says it’s a public health issue and that all restaurant workers should be protected from secondhand smoke. California successfully imposed a similar ban in 1998 and, as WNYC’s Amy Eddings reports, it may hold some lessons for New York.

CURWOOD: In New York City, Mayor Michael Bloomberg wants to ban smoking in all restaurants and bars. The mayor says the move would save thousands of restaurant employees from the health dangers of secondhand smoke. Opponents say the ban would infringe on their personal freedom and hurt the restaurant industry.

It’s not a new debate, but it’s a growing one in more and more localities. One of the earliest actions came in 1998, when the state of California enacted a smoking ban similar to what New York City is now considering. From member station WNYC, Amy Eddings takes a look at what lessons New Yorkers might learn from their west coast cousins.

EDDINGS: A recent public hearing on the smoking ban drew a large passionate crowd to New York’s City Hall. Outside, a bar owner with a huge cigar blew smoke in the face of a supporter of the ban who was in costume as the Grim Reaper. Someone dressed as a large cigarette held up a sign, "I love secondhand smoke." And a man jeered Mayor Michael Bloomberg when he briefly stepped outside to thank his supporters.

MALE: I’m a bartender in this city, Mike, and I’m not going to have anymore customers.

EDDINGS: Mayor Bloomberg, an ex-smoker himself, has already raised cigarette taxes, pushing prices to seven dollars a pack. Inside the crowded council chambers, Bloomberg testified that 1,000 New Yorkers die each year from secondhand smoke, mostly from heart attacks. He said the ban would not stop people from smoking, but it could save lives.

BLOOMBERG: The question before us is straightforward. Does your desire to smoke anywhere, at anytime, trump the right of others to breathe clean air in the workplace? Common sense and common decency demand the following answer: the need to breathe clean air is more important than the license to pollute it. 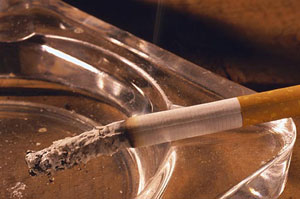 EDDINGS: Smoking bans in restaurants and bars are growing in popularity. Nassau County on Long Island, New York recently passed a ban that is similar to New York City’s. Boston is considering a ban. The state of Delaware passed a ban this year, while California has had one in place since 1998. Smoking in New York City restaurants is already limited. A 1995 law allows patrons to smoke only around the bar.

EDDINGS: Sitting on a bar stool at Gallagher’s Steak House on Manhattan’s West Side, veteran newspaper columnist Sidney Zion savors a cigar. He joined others at the bar for a smoke-in.

ZION: When fascism comes to America, it will come with a white coat and a stethoscope. We’re a free country, I hope. And this city cannot turn into LA East.

REIDY: Did you ever go to a bar where there’s no smoking? Yeah, it’s boring. It’s like, you know what, all of those people there are like losers. You look in there and go, like, where’s the fun?

EDDINGS: On the East Side at a supper club called Jimmy’s Downtown, supporters of the ban hosted a smoke-free party -- complete with a new drink, the "No No Nicotini" -- to prove the folks at Gallagher’s wrong.

KLOTZ: If you look around here, this is not boring.

EDDINGS: Dan Klotz is a spokesperson for the American Cancer Society.

KLOTZ: Everybody likes this because no one likes coming home smelling of cigarette smoke.

EDDINGS: Advocates for smoke-free environments have heard the restaurant and tobacco industries warn of economic collapse before, when California passed its smoking ban in 1998. Instead, in the two years that followed, hotel and restaurant sales in the state went up, and smokers like San Franciscan James Dawson seem to have adjusted to their new nightlife rituals. He has some advice for New York smokers if Mayor Bloomberg’s ban becomes law.

EDDINGS: Dawson is dragging on a cigarette outside a jazz club in San Francisco’s North Beach area--a neighborhood packed with bars, nightclubs and restaurants. Unlike New York’s proposed ban, smoking is allowed in outdoor dining areas in California. Some places have pushed back their entrances to create outdoor cafes. Others have set up sidewalk smoking corrals, with brass posts and velvet ropes.

DAWSON: I mean, sometimes it’s funny. Because if you’re in a dive bar and they have a little patio, there’s, like, no one in the bar and there’s like 40 people on this 9x12 patio.

EDDINGS: At the University of California San Francisco, Stanton Glantz, a professor of medicine, says the most important lesson New York City could learn from California’s experience is that the stakes are the highest for the tobacco companies. Cigarette consumption goes down, he says, when places are made smoke-free, and New York’s ban would affect 13,000 restaurants and bars.

GLANTZ: If this works in New York, it will work anywhere. And so the potential losses to the tobacco companies are huge. And what I expect you’ll see there in New York is what we saw here in California, and that is very expensive efforts orchestrated by public relations firms on behalf of the tobacco industry to encourage people to ignore the law.

EDDINGS: The tobacco company Philip Morris is located in New York and has, in the past, lobbied unsuccessfully to keep the city from passing smoking restrictions. A spokesperson says no current public relations campaigns are being planned, but the company is considering providing money for – quote – "those who share our views."

At least one other public hearing is scheduled on the ban. City officials say the council may vote on the measure before the end of the year. Even if the smoking ban passes, it will not put an end to the debate. Advocates expect an adjustment period where restaurants and bars will be monitored, even sued, to be sure they comply. And smokers will have to change their habits, which, as many will tell you, can be very hard to do.

For Living on Earth, I’m Amy Eddings, in New York.