In Aspen and Pitkin county, Colorado, a new building code requires new homes to meet a strict energy budget. Homeowners who go over the budget by consuming extra energy have the option of installing a renewable energy system or paying a hefty tax to support energy-saving projects. John Ryan reports.

CURWOOD: Buildings are the nation's biggest consumers of energy. They're also the biggest polluters of the atmosphere. The wealthy resort community of Aspen, Colorado is using public funds to make energy saving improvements in private homes, and the program gets its money in an unusual way. There is now a tax on energy intensive luxury homes. John Ryan has this report.

RYAN: High on a hillside outside Aspen, Robert Trowne steps out of his SUV and onto the driveway of a $15 million dollar vacation home that his architecture firm built last year.

TROWNE: Basically, we have a cobblestone inset within a colored-exposed aggregate pattern.

TROWNE: In the center is an antique wellhead that we bought from France, and just set up for decorative pots and flowers.

RYAN: Pipes beneath the driveway heat the surface enough to melt snow away during cold, Rocky Mountain winters.

TROWNE: If you live in an area like this that gets the volume of snow we do, it's the ultimate luxury, really, to not have to deal with it.

RYAN: Features like snow melting driveways and outdoor swimming pools heated year-round, prompted the city of Aspen, and Pitkin County, to revise their shared building code. The code was already tough on energy use inside new homes, requiring things like super-insulated walls and windows. But the unregulated outdoor heating could end up tripling luxury homes already steep winter-time energy use.

TROWNE: To run this water court, and their spa, and a house like this during the high season, they probably spend $5 or $6,000 a month in gas bills.

RYAN: With the revised code, owners of new homes who want to install these outdoor luxuries now have a choice. They can add renewable energy features like solar panels to their homes, or they can pay a hefty fee to REMP, the Renewable Energy Mitigation Program. The fee is based on how much carbon dioxide that excess energies will generate over 20 years, up to a maximum of $100,000 per house. It works out to $340 per ton of carbon dioxide; the world's stiffest tax on carbon emissions.

UDALL: This is one example of what we hope to build here in the Valley, is a set of decentralized, distributed small power plants that heat-- 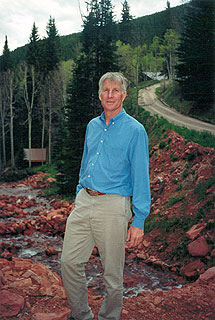 RYAN: Randy Udall stands beside Ruedi Creek, a rushing mountain stream 40 miles from Aspen. His non-profit group the Community Office for Resource Efficiency helps the county government administer REMP grants to projects, including the small hydro power plant that two homeowners built on this creek. But why would Aspen, the winter playground of the jet set, pay attention to energy issues?

UDALL: We're quite concerned now in our valley about the rapid increase in global climate changes. We've just had the warmest winter in 120 years, and our economy is based on skiing. And what we see happening is our ski season being shortened on each side now because of climate change.

RYAN: Udall believes that energy codes nationwide will eventually come to resemble Aspen's and require buildings not only to conserve energy, but produce it as well. 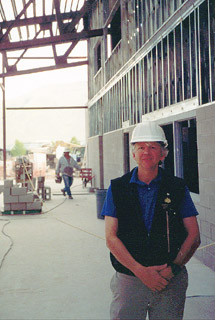 KANIPE: The building shares a pool, and then the other half of the building is an NHL-sized ice hockey rink.

RYAN: Heating and cooling a single building to polar opposite temperatures would normally guzzle energy. But this rec center is on the cutting-edge of energy efficiency. Thanks to grants from REMP, the building includes features like super-efficient boilers to heat its air, and a state of the art natural gas micro-turbine to generate its electricity.

KANIPE: In fact, about 75 percent of the amount of energy that goes into the turbines to produce electricity produces heat, and we don't look at that as a waste product the way larger power plants do, but we take the 75 percent heat, and use it to produce the domestic hot water for the showers, and most importantly, for the pool features.

RYAN: Kanipe says he initially had misgivings about this program that lets the biggest polluters pay other people to pollute less. But REMP's environmental benefits have erased his earlier doubts.

KANIPE: The advantages of this program outweigh the social stigma of someone with a lot of money can buy their way out, because basically it does the entire world good. We are able to quantify the number of tons of carbon dioxide that we keep out of the atmosphere every year as a direct result of this program. And I believe in that.

RYAN: REMP has generated few complaints, partly because the houses it covers are mostly vacation homes, so their owners can't vote locally. It also seems that $50,000 fees barely register on the radar screens of those who can afford to heat their driveways.
Architect Olivia Emery designs multi-million dollar houses in the Aspen area. She says many of her clients have simply never thought about their energy use.

EMERY: We've had clients who are mystified by why we have an energy code to begin with. And I think the real question is, is there a limit to how much you are entitled to consume in energy terms?

RYAN: It's a question that big energy consumers--whether homeowners or the United States as a whole--will face more as the world struggles to address global warming. For Living Earth, I'm John Ryan in Aspen, Colorado.

CURWOOD: Coming up, some say cleanliness is next to godliness, but they don't say what to do when you run out of Holy Water. Stay tuned to Living on Earth.