The year 2003 is the bicentennial of the Lewis and Clark trail. Join us for a series of audio postcards by producer Barrett Golding who’s bicycling the length of the historic route.

CURWOOD: 2003 marks the start of the Lewis and Clark Bicentennial.

CURWOOD: And we’ve been wondering what’s happened to the woods, waterways, prairies, and towns along the Lewis and Clark trails these past two centuries.

WOMAN (WITH DRUM): One two, three…

CURWOOD: So we sent producer Barrett Golding along the trail on a bicycle to bring back portraits of the people he met along the way.

CURWOOD: One of his stops was along the western edge of the Columbia River bar. It’s a place where the river meets the ocean, a dangerous place that some call “the graveyard of the Pacific.” And it’s where you’ll find the United States Coast Guard Station Cape Disappointment. Duty Surfman Kyle Betts works on the Search and Rescue team there, pulling boats and people out of, perhaps, the most treacherous stretch of water on the West Coast.

BETTS: We’re designed for the worst that Mother Nature can throw at us. And that’s when we go out. 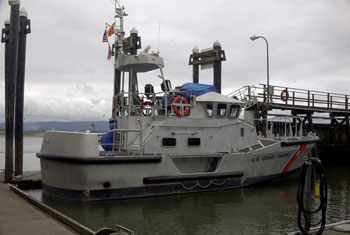 BETTS: This is about the worst you’re gonna get on the West Coast. You got to figure almost all of the Pacific Northwest drains through the Columbia River, meeting those waves could come from the Sea of Japan or even as far as Alaska, and when it meets this big flow of water coming out, it just builds up the waves up to 30, 40 feet in height. They’re even recorded instances of 50 feet of wave coming in across this bar. 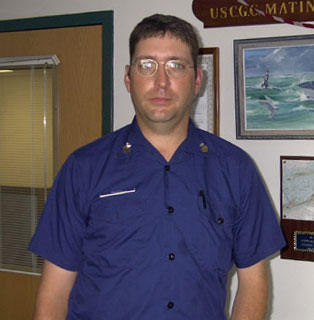 BETTS: And it can get pretty nasty out here. The waves, they make a tremendous sound, like freight trains rolling in through the bar, you can here them coming. You don’t see them, because most of the time it’s the middle of the night you’re out there, and the wind is blowing about 50 to 75 knots and the rain piercing your skin, and breaks from every direction coming at you. To give you an idea what it can be like, lift a lid on your washing machine. (WATER ROARING) And the sound of the 40,000 pound boat straight up and then you’re falling 20 feet free falling, and you just feel yourself falling down the back side, and you can’t see nothing and the froth is blowing all over, and then you got kids, 18, 19 years old standing behind you, and their eyes are the size of saucers, wondering what you do. ‘What do we do, what do we do?” And I say, ‘When you feel the boat stand straight up, bend your knees, it’s a long ways down.” That’s basically all you can tell them.

BETTS: You see kids mature real fast. You know, they get here, they’re 18, just out of high school, they’re still talking about the prom dance, and the next thing you know you’re out there in these big waves, pulling people out of the water and saving their lives.

BETTS: You see people in the water, and you have to make that decision. Can I get in here and do this? And the waves are big and the wind is big, and you know you’re gonna put a million dollars worth of boat and five lives at risk to save one, and when you go in there and you pull that life out of the water, and you get them out and you get out safely, there’s no greater thrill they could give me, they could give me any award they want to, when you turn to that person and they say, “Thank you,” that’s the biggest reward you could ever get, I don’t care what kind of medal they pin on me for that.

CURWOOD: Barrett Golding’s portraits of the Lewis and Clark Trail, 200 years later are part of the Hearing Voices series, funded by the Corporation for Public Broadcasting. For more audio, images, and interviews from the trail, check out our web site at loe.org. That’s loe.org.