Al Gore has taken himself out of the presidential running in 2004, leaving a party of contenders for the Democratic nominee. Host Steve Curwood talks with Deb Callahan, president of the League of Conservation Voters, and Bob Zelnick, chair of the Journalism Department at Boston University and author of the book "Al Gore: A Political Life," about Gore’s environmental legacy.

CURWOOD: Welcome to Living on Earth. I'm Steve Curwood. When former Vice President Al Gore decided against making another run for the presidency, he left the field wide open for other Democratic hopefuls. The Democrats won't pick their nominee until next year, but none of the likely contenders are as closely tied to the environment as Al Gore.

To talk about Mr. Gore's eco-legacy, I'm joined now by Deb Callahan, president of the League of Conservation Voters in Washington, D.C., and Bob Zelnick, chair of the Journalism Department at Boston University and author of “Al Gore: A Political Life.” Hello to you both.

CALLAHAN: Hi, how are you?

CURWOOD: Now, we've seen Al Gore pursue a variety of political issues over the years, but when do you think the environment became such a big focus for his career? Let's start with you, Bob Zelnick.

ZELNICK: I think it began to come into focus for him during his Congressional years. He was someone who was instrumental, for example, in the legislation that set up the Superfund clean-up fund.

I think it became more of a passion with him after his unsuccessful 1988 campaign and the serious injury of his son. As you know, that was a period of great introspection in Al Gore's life, and he decided to write a book called “Earth in the Balance” about man's assault on the environment, and some promising remedies that he saw. And, of course, the centerpiece of that was the global warming problem, and he was really the only one speaking about it at the time.

CALLAHAN: I think he actually came to Congress as an environmentalist. I believe those values were shaped early on when he was a part of the Vietnam War generation and the environment was clearly an issue, along with peace, that people in that generation were thinking about. And “Earth in the Balance” was always in his head before the campaign in '88 and during, but I think he realized after that first failed campaign he wanted to say something to the American people. And he realized that what he wanted to say that wasn't being said was about these environmental issues, and he wrote what turned out to be a very important, informative book.

CURWOOD: How well received was this book, Bob Zelnick?

ZELNICK: Well, I think it was well received. It was critically received in some areas, but it was an international bestseller, and it has been through edition after edition. I think as time went on, there was more of a scientific consensus behind the views expressed in “Earth in the Balance,” at least many of them.

I would say though that Gore's political line was not quite as straight and direct as one might suppose. Yes, he did talk about the ozone layer and he did start to talk about global warming during the '88 campaign, but others began to ridicule him and called him "ozone man" and suggested that he had better get on something a bit more mundane if he wanted to succeed. And he started talking about jobs and some populist-type issues in '88, as well as defense. He tried to paint himself as the moderate, pro-defense Democrat, which indeed he was. 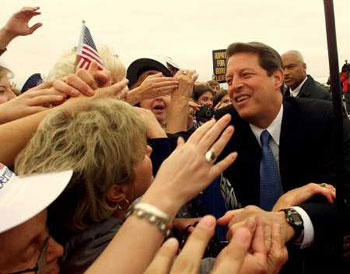 CURWOOD: This agreement, international agreement, which has now been ratified by 100 countries, resonates with Al Gore's own book “Earth in the Balance” which really sounds a clarion call on climate change. And yet some would say that Al Gore did very little for the Kyoto Protocol. It was going down for the count in Kyoto and it's true that he flew out there in 1997. But, in fact, the resolution that pretty much crippled it that went through the Senate, the White House paid no attention to and didn't fight. And indeed, even in the lame duck period of the Clinton administration, when Clinton or Gore could have stood up for Kyoto in The Hague when it was having tremendous difficulties, little was said.

So some would say there was a lot of rhetoric from Vice President Gore about the Kyoto Treaty, but not a lot of action. How fair is that analysis, Deb Callahan?

CALLAHAN: Clearly, it is interesting that global warming, being one of the hallmark issues of Vice President Gore's career, that when he was vice president, and this issue was squarely on the international table, that it wasn't moved forward forcefully by this nation which is by far the biggest greenhouse gas emitter in the world.

I think that it could have been different if we had agreed that getting started in these reductions, in hindsight, getting started, and getting some measures on the books in the U.S. and providing some leadership, instead of getting the whole ball of wax, that might have put us in a different place.

But as you said, Steve, the Byrd Amendment that was passed in the Senate that said that we need to have not just the United States reducing, but other third world nations must also reduce. And that sort of politically sort of set up the people who wanted to see the Kyoto Treaty ratified. It put us in a tough place, because you had to argue against something that looked like parody.

ZELNICK: But the vote was clearly an indication that Kyoto, in the form that Gore negotiated it, was not going to go anywhere in the United States Senate. I don't think there is any question about that. And why Gore moved ahead with it, number one, I think it was, at least it put something out there that reflected his views and the views of the constituency that he cared about.

And second of all, I think he felt that once it was on the table there, and being adopted by countries, there would be increasing political pressure which he could address during his first presidential term, to perhaps get some trading rights, or whatever it was, that might make it a little bit more palatable, and use his political clout to move ahead in his presidential term.

But I think there was a series of political misjudgments and, obviously, the consequence of it is there is no treaty at all, and no pressure on the current administration to move in that direction.

CURWOOD: I want to play some tape actually from the 1992 campaign when Living on Earth talked to Al Gore when he was running for Vice President. He seemed actually to be pretty optimistic about what could be accomplished environmentally, although he sounded a cautionary note as well. Here is some of the tape we recorded then.

CURWOOD: So here we are, Al Gore in 1992. How effective do you think he was at expanding those boundaries, Deb?

CALLAHAN: I think that's an important question, and I think that there were two important audiences in 1992 for Al Gore and the environment and his position as vice president. And the first audience was the public; you know, leading the American public to understand what was possible and what were the threats around the environment, and where can we and should we go.

The second very important audience for Al Gore was the president himself, Bill Clinton. And, in fact, I think Gore very wisely recognized that here was a president who had not been that exposed to the marketplace of environmental ideas. And so I think Al Gore recognized that probably one of the greatest benefits that the environment could derive is if Gore could successfully engage Bill Clinton's very active mind into these issues of the environment.

And interestingly, in the second term of that administration, you could see President Clinton really stepping up and into environmental issues; not only around climate change, but also into these issues of health and safety issues, the air pollution, the public lands, the forests, we see the roadless law and other things. And now that he's out of the presidency, Bill Clinton shows that Al Gore really did succeed in teaching that audience.

ZELNICK: Well, I don't dispute the factual narrative. I might put a slightly different spin. I don't know that Bill Clinton, when he was an innocent babe in the woods during the many years that he served as the governor of Arkansas, I think he sacrificed environmental values in that state to the chicken industry and other important political interests in his state. And I think, to some extent, Gore probably persuaded him of the argument that Deb has made, that you can do some good things for the environment and make it politically palatable, or even advantageous.

CALLAHAN: It's a very important question. Did Al Gore do enough? And as I think about how the Clinton/Gore administration worked on the environment, it's interesting that it wasn't all centered around the president. Those actions weren't all centered around the vice president. In fact, there were people throughout the agencies that had strong environmental perspectives, and leadership in the Forest Service, at the Environmental Protection Agency, at the Council of Environmental Quality.

I think what's important is we're stepping back and thinking of the legacy of Al Gore. He really had more influence on creating an awareness of the federal government's role in environmental policy than anyone who has ever gone before him, and I say that including President Nixon, under whom many of our nation's key environmental laws were passed.

CURWOOD: Debra Callahan is president of the League of Conservation Voters in Washington, D.C. Robert Zelnick is author of “Al Gore: A Political Life” and also teaches journalism at Boston University. Thank you both for joining me today.