From the forests of North Idaho, producer Guy Hand reports on an experiment that has environmentalists worried. It, too, is aimed at reducing bureaucratic slowdowns and, also, at giving local people more say.

CURWOOD: There is one program the Forest Service wants to expand. It's an experiment that fits well with the Bush administration's determination to speed up logging in the national forests. It's called “stewardship contracting” and it's just now being tested at 84 sites around the country.

Producer Guy Hand visited one effort in north Idaho that could become a model for future forest management.

SAVIDGE: This is a Scandinavian harvester.

HAND: Craig Savidge is proud of the sophisticated equipment he and his group of local volunteers are using in this dense conifer forest near Priest Lake, Idaho. 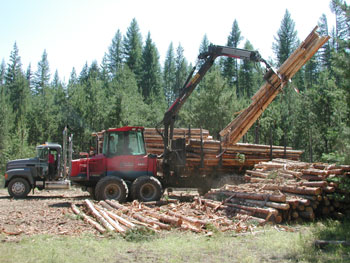 HAND: But he's happier still after a life in logging, to be trying a new kind of forestry. Rather than performing a single short-term project, Craig and his crew have won a stewardship contract. It gives them a whole package of responsibilities, stretching out over a seven-year period. The group is thinning fire prone stands, removing weeds, old roads, and more. In addition, the Forest Service is giving the crew more flexibility, right down to letting loggers choose which trees to cut.

SAVIDGE: I convinced the Forest Service that these were trained operators. They do this every day, they've worked for us for years doing this work.

HAND: In the past, Craig's contracts have called for things that just didn't make sense. He has been instructed to plant seeds one day, then tear up the same ground with logging equipment the next.

SAVIDGE: I have practiced timber sales with industry for a lot of years and we used to do things that both the contracting officer and I knew were ludicrous. But unfortunately, that's what was in the contract and we had to do it. And under this contract, it's not what's in the contract so much, but what the end result is of your activity.

HAND: That end result is decided beforehand by each individual stewardship project. Here in north Idaho, thinning flammable forest and overgrown brush near communities is a primary goal. Even though that does mean cutting trees, the group says selling timber isn't their main objective.

SAVIDGE: The trees that we cut down are a byproduct of the restoration work we're doing. And because they have value, they cover costs over and beyond their own removal, but the removal of the hawkweed and the slash of field reduction work. [SOUND OF MACHINERY] It's just a blessing that by improving this, that we end up with cash to do these other things.

HAND: But the profit margins are slim in restoration work, so the Forest Service must sweeten the pot with larger, more marketable trees. They call it "goods for services" and conservationists aren't at all happy with that aspect of stewardship contracting. They believe connecting trees so closely to paychecks is a recipe for abuse. But the Forest Service says this is one of the few ways the agency can fund environmental improvements on public lands. 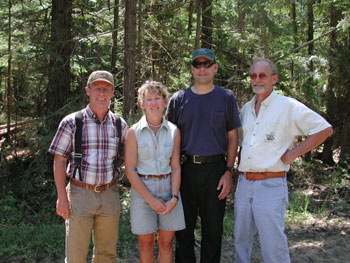 ASLESON: From the Forest Service's perspective, I view this as a new way of doing business.

HAND: Norgy Asleson, the Forest Service's project leader for this stewardship program, says the project can improve not only the environment, but his agency's relationship to the community.

HAND: Community collaboration is encouraged in stewardship contracting, but it isn't ensured. In fact, most projects have been awarded to timber companies rather than communities. But the Priest Lake group believes local involvement is their strength. Novelist Liz Johnson Gebhardt is one of the group's volunteers.

GEBHARDT: The Forest Service is giving the communities that actually surround all these lands the opportunity to come in, and we talk, and we talk openly. This would never have happened before. They would never have even listened to us. The listening factor has been huge.

HAND: All this fresh communication has raised the area's awareness of environmental issues, and in so doing, blurred the line between tree hugger and timber beast.

SPRENGEL: For years, I've probably battled this community and probably they would have loved to see me hanging from the nearest lamppost.

HAND: Even environmentalists like Mark Sprengel of the Selkirk Conservation Alliance admits this experiment has brought some positive results.

SPRENGEL: I think one of the biggest surprises is to hear people that I had opposed for years suddenly starting to say some of the right things, acknowledging that past practices have been incredibly destructive and things had to change, and at the same time, wanting to be part of correcting the damages. I find that enormously encouraging.

HAND: But Mark also has concerns about giving locals more control of our national forests. So does Mike Petersen, director of the Lands Council, another conservation group.

PETERSEN: Let's look at the history of that local perspective. If they had been real stewards of the land, then why are the places so trashed? Why have we seen community after community surrounded by clearcuts? Unless they've all had this epiphany and they've changed their ways, they would be the last people I would trust with my public lands.

HAND: National environmental organizations point to several stewardship programs that seem to show little interest in stewardship. One project, also in Idaho, proposes to remove 70 percent of the forest canopy on its allotted land. Others plan to log deep into roadless areas. One is rumored to have been taken over by a right-wing militia group who says consensus smacks of communism.

[SOUND OF MANY VOICES AND CLINKING GLASSES]

HAND: Some environmentalists think the problem goes way beyond the issue of local control. Gary Macfarlane is watch director for the conservation group Friends of the Clearwater.

MACFARLANE: These are just some subtle ways that the so-called free marketeers of the world are trying to get the public lands out of the hands of the public and into private ownership.

HAND: Gary is volunteering today, too, not on the stewardship pilot, but at a Moscow, Idaho food co-op. He thinks the Bush administration is using stewardship contracting as just another way to dodge forest management safeguards. 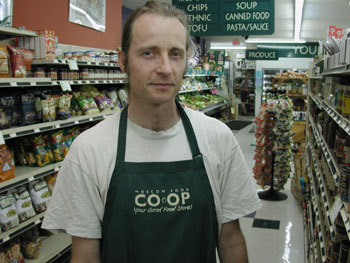 HAND: Conservatives have also tried to remove the monitoring aspect of the stewardship program, a safeguard environmentalists say helps keep a project honest.

HAND: All of this worries Priest Lake Stewardship volunteer Craig Savidge, a Republican himself.

SAVIDGE: I think it's throwing gas on the fire. Well, it's going to inflame the environmental community. When you tell them we're going to exempt public input from the appeals process, you've pushed them in a corner. They can go nowhere but against you.

HAND: And that could jeopardize the stewardship contracting program and Craig's attempt to prove that locals have something important to offer our national forests.

HAND: Yet this notion of backyard is a complex one. Those who live in cities far from ponderosa pine and postcard horizons like to think of national forests as their backyard too. But distance can make a difference and those who live a few footsteps from badger dens and mountain meadows say they have a kind of knowledge we should listen to. They say stewardship contracting gives them a voice. But others say that when money and jobs are involved, locals are no better than anyone else at seeing the forest for the trees.