Solstice is one of the most important times of the year for Pagans, people who practice an environmental religion with pre-Christian origins. Producer Robin White reports as the numbers of neo-Pagans have grown, they've soft-pedaled earlier claims to links with original Pagans.

CURWOOD: The winter solstice is indeed here. Since the misty times before written records, people have celebrated the turning of the seasons. Even the Christmas tradition of decorating with lights and greenery comes from the older Pagan holiday of the winter solstice.

These days, modern Pagans and witches greet the solstice with chants and invocations, and they link their worship of the earth with environmental activism. But some critics say neo-Paganism is a modern fiction, and today's winter solstice rituals have nothing to do with how Pagans celebrated in the past. Robin White has our story.

WHITE: These days, the towering monument at Stonehenge in the south of England is skirted by a road, and tourists are kept at a distance. But Brian Davison was the inspector of Stonehenge for ten years, and offered a rare chance to walk between the stones and feel their ancient power. He describes what it's like to watch the sun rise on the winter solstice. 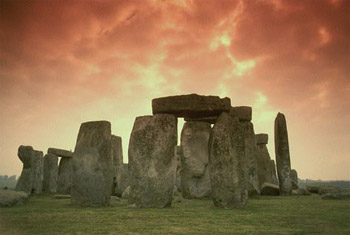 WHITE: The people who built Stonehenge didn't leave a guidebook about how they used the site, but Davison says there is no doubt the stone circle was built to face the sun on the shortest day of the year. The winter solstice was central to the farming society around the great monument.

DAVISON: In the middle of winter, it's getting a bit grim; the nights are getting longer, the days are getting shorter. Are you going to go into everlasting night? And there comes a point when the relentless march of the sunrise and the sunset stops, and you know it's all right. There will be a spring.

WHITE: Flash to the middle of a San Francisco winter four and a half thousand years later, and half a world away. Starhawk, a Pagan author and self-described witch is not so much worried about whether the spring and harvest will come again, but she is out in her garden, which is full of fallen leaves and the decay of winter, and she's getting excited over a brew of worm tea, a mix of water and wormcasting she gives to her plants.

STARHAWK: And they love it. They just perk right up. If you're listening you hear "Oh great, give me some more of that" you know?

WHITE: Listening to the natural world is a habit for Starhawk and central to her religion. She helped found the modern Pagan movement with her 1979 book “The Spiral Dance” which made links to ancient earth-based religions. Most Pagans today are, in fact, environmentalists.

STARHAWK: For Pagans, the earth is a living being, and all of the plants, all the animals, are recognized as being conscious and communicating with us. And what they're saying is "Help! We're under assault."

WHITE: Starhawk has joined environmentalists at protests such as the ones at the World Trade Organization meeting in Seattle and the Free Trade Meeting in Quebec. But at demonstrations, she doesn't hold placards, she holds rituals. Rituals are the center of neo-Pagan worship and some of the biggest still happen on the winter solstice. The neo-Pagans believe in a female earth-goddess and a male god, sometimes called “the Green Man.” In San Francisco, one group of Pagans celebrates the solstice on the beach.

DAVIS: I invoke the Green Man, the god of rot; the god who makes green things grow from everything that has died and decayed.

WHITE: Pagan Jack Davis demonstrates the invocations used at the beginning of the winter solstice ritual. There is an element of theater and improvised poetry in the language in Davis' movements. He says the Pagans usually strip off their clothes and race into the ocean for a purifying splash.

DAVIS: At least for me, for Paganism, it is what of this makes sense to me. You know, at some level we make up religion. There is a need for it and we make it up.

WHITE: But this "making it up" has got Pagans into trouble with some academics and historians.

ALLEN: It's sort of like having your own costume party, in a way.

ALLEN: You can get dressed up in medieval costumes. It's like having a renaissance fair right in your own home. And if you look at the pictures of those ceremonies, you see everybody is dressed up in some kind of long dress, and guys wearing wizard hats, and things like that.

WHITE: Allen published an article in The Atlantic Monthly debunking neo-Paganism as a concoction from the 1950's. She takes issue with the Pagans’ claims that there is an unbroken link between their religion and the Pagan practices which existed before Christianity.

ALLEN: The whole notion of there being a kind of a holdover religion that dates back to the Stone Age, it just is not substantiated.

WHITE: Rather than being pre-Christian, Allen thinks Pagan rituals take some of the customs cast off by the Christian Church. Pagans are fond of altars, chalices, candles and old language-- things that Allen says some Christian churches have given up.

In later editions of “The Spiral Dance” Starhawk has backpedaled claims that neo-Paganism is directly descended from ancient religions. But she says it's the essence of the religion that's important.

STARHAWK: There is just no question about the fact that people all over the world have always had some kind of spirituality rooted in the land that they come from. And those things don't just die away. They transform into something else. But if you dig deeper, it's about these forces that are very old and very universal.

WHITE: Back in England again at the University of Bristol, Pagan historian Ronald Hutton says the world itself has changed and it's not surprising that Paganism is different.

HUTTON: The great difference between ancient and modern Paganism is that ancient Paganism is in a world which was dominated by natural forces, so you're forever worrying about bad weather, epidemics, floods, droughts, natural disasters.

WHITE: Now, he says, the natural world could be overwhelmed by human forces. Drawing on the early Christian record, Hutton says the ancient Pagan solstice celebration would be familiar to us. They ate a big meal, they gave gifts, and shared with the poor, and they burned fires for light and warmth. The winter solstice was about making up for absences in the world around and Hutton says today's Pagans, by embracing ecology and inventing magical rituals, are doing much the same thing. For Living on Earth, I'm Robin White.