Instead of kicking back during the winter, many farmers are now keeping busy – at the computer. They’re using global positioning systems to do what’s called “precision agriculture,” which uses satellite coordinates to help map their fields. As Minnesota Public Radio’s Jeff Horwich reports, the use of this technology is helping to make planting crops a precise science.

CURWOOD: There was a time when winter on the farm meant equipment tune-ups, cleaning the house, and spending time with the family. But a growing number of farmers are whiling away winter in front of computer screens, accessing the Global Positioning System. That’s the extensive satellite navigation network that was originally created to help the military track enemy troop and missile movements. Now GPS and something called "precision agriculture" are taking more of the guesswork out of growing some crops. Minnesota Public Radio's Jeff Horwich reports.

DUNSMORE: Anything that's got a cord on it, I love. And that's part of the reason I spend a lot of time working here. Because I enjoy doing it. I enjoy working with software and computers. It's a daily challenge.

HORWICH: So, you're kind of a technology junkie, in any case.

DUNSMORE: Pretty much so. Yup. 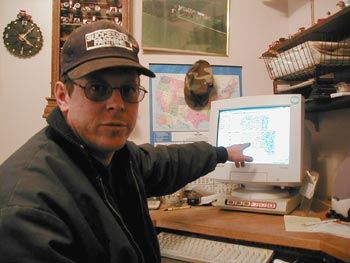 Chris Dunsmore uses his computer, and the global positioning system, to plan how to use his land.
(Photo: Jeff Horwich)

HORWICH: Dunsmore's PC shares a sunny room in the farmhouse with the washer and dryer. On the screen, he pulls up the irregular outlines of a farm field, covered with tiny neon dots.

DUNSMORE: On this field here of about 110 acres, we have 16,000 data points to work with within that one field.

HORWICH: What's a corn farmer doing with 16,000 data points? During the harvest, Dunsmore's combine took a measurement every three seconds of how much corn it was bringing in. An antenna on top of the cab linked up with the Global Positioning System satellite to record the exact position of the combine on earth at each moment. Put it all together, and you get 16,000 readings, fading from red to yellow to blue on a computer screen, telling you how well your corn did at any given spot.

DUNSMORE: You can see here, the lower yielding areas of the field. These here, we already know that there are drainage concerns.

HORWICH: Dunsmore and three other farmers jointly farm 3,500 acres in central Minnesota. Modern farm equipment and GPS readings break their land down for them into hundreds of thousands of smaller units, hence the term "precision farming." Put simply, the patterns revealed by the tiny units lead to much more specific prescriptions. For seeds, for fertilizer, for drainage, it's more efficient and, arguably, better for the planet.

ROBERT: We like to say that we do the right thing, at the right place, the right way.

HORWICH: University of Minnesota professor Pierre Robert was there in 1982 when some local soil sample data was plugged in to one of the first IBM PCs on campus. Robert considers that day, in St. Paul, the world's first glimpse of precision ag.

ROBERT: The Midwest is where the concept started years ago. But it is also the area where the precision agriculture is certainly well adopted. There are areas in specialty crops, like sugar beets in Northwest Minnesota, where we have about 40 percent of the farmers using some aspect of the concept.

HORWICH: Precision ag spread gradually as equipment prices came down and technology allowed farmers and researchers to become more precise. With more mainstream crops like corn and soybeans, Robert guesses ten percent of Minnesota farmers are using it. Individual farmers may be looking at their bottom line. But researchers, like Robert, are also excited about potential environmental benefits. Farmers confronted with computer maps of their fields are finding many places where they can cutback dramatically on fertilizer and other chemicals.

ROBERT: In a previous project, we strongly could show that we are capable of reducing by at least 50 percent the use of herbicides. And of course, that has a strong potential to reduce excess into surface water.

HORWICH: By now, the first wave of enthusiastic, progressive farmers like Chris Dunsmore, have mostly come onboard. But current commodity prices are discouraging the next wave of farmers from making an expensive investment in new technology. It costs around $9,000 for the basic GPS receiver, crop yield monitor, and software it takes to get started in precision farming. 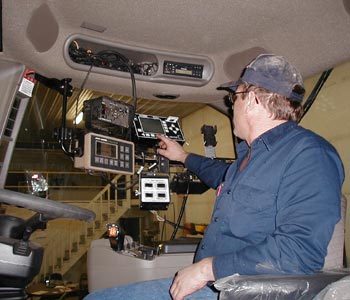 HORWICH: Dunsmore climbs up into his tractor to show off some of his newest equipment. It's a yield monitor for his sugar beet harvester, installed last year. When he fires up the tractor, a screen near the roof of the cab glows a phosphorescent blue. He punches a few buttons on it to walk through some common operations.

At harvest time, it measures how much he's pulling up and how much moisture is in the crops. It's a critical piece of the puzzle that shows what's working, what's not, and where money's being wasted. For years, Dunsmore had been raising varieties of corn and soybeans he thought were doing well. But a detailed look at the numbers showed they just weren't performing in certain fields.

So far, the biggest savings of all have come from cutting back on fertilizer where he doesn't need it. He estimates he's saving five dollars per acre each year because of precision farming. At 3,500 acres, that's more than $17,000 – nothing to sneeze at. Still, Dunsmore says farming in the information age is both a blessing and a curse.

DUNSMORE: We've got just oodles of information. That's one of the biggest problems we have now is we're getting so much information that we're having a hard time breaking it down.

HORWICH: Information overload might be the biggest of Chris Dunsmore's worries. But precision farming may accelerate some much more intractable issues facing American agriculture as a whole. For one thing, economies of scale and the cost of new technologies make precision ag accessible mostly to large farms, which then only increase their competitive advantage. Even Dunsmore teamed up with three neighbors to make it pay off. And some say America's farmers are too efficient already, producing more food than the world is willing to pay for and keeping commodity prices perpetually low. This frustrating paradox of efficiency is one problem precision farming may only make worse. For Living on Earth, I'm Jeff Horwich in central Minnesota.