States across the West are worried they'll face a fifth straight year of drought. Mountain snow packs, so far, are disappointing. From KUER Jenny Brundin reports on how Utah's Mormon history has made the state reluctant to enforce water conservation.

CURWOOD: Southern Californians will be hearing more about saving water, and they won't be the only ones. Many Westerners are looking from the calendar to the mountains and wondering for another year where the snow is. Drought still plagues the region.
In Salt Lake City, where pioneers built a green valley over sagebrush and dry grass, the Wasatch Mountains no longer provide enough water. But Utah is only beginning to come to grips with its desert reality.

From member station KUER in Salt Lake City, Jenny Brundin has our story.

BRUNDIN: Glenn Leonard likes to imagine what it was like when the Mormon wagon pioneers rumbled down the mountains into the Salt Lake Valley below.

LEONARD: These early Mormon pioneers were New Englanders, and they had found the rich prairies of Illinois and Missouri their Eden. To come to Salt Lake City and the Salt Lake area and see this desert was, as one of the women in the company said, a delightful disappointment. This wasn’t the Midwest.

BRUNDIN: Leonard, director of the Museum of Church History and Art, points to the mountain canyons on a museum wall map. Driven by persecution and buoyed by faith, says Leonard, Mormons built a civilization in the desert.

LEONARD: Mormons had a religious worldview that gave them a sense of being that people were the destiny.

BRUNDIN: They created a water ethic inextricably linked to their faith. Leonard puts in a CD of early Mormon music from the museum’s collection. [EARLY MORMON MUSIC UNDERNEATH} While the lyrics speak of hardships, there is a deep-rooted belief that the pioneers can and will transform the desert.

LEONARD: They were quoting the scripture that says the desert will blossom as a rose. That took on more meaning after they got to Utah, and that became almost a goal for them. And Brigham Young encouraged them. He said God will change the climate. He will give us more water if we’ll just do our part.

BRUNDIN: So Mormons did their part. They planted fruit orchards, shade trees and fields of grass, creating an oasis in the desert valley. The settlers erected dams, filled reservoirs and dug canals, piping water from farther and farther away. In the process, the Mormons pioneered a regional economy based on irrigation. Now many Utahans, like Nikki Rich, can imagine nothing else.

NIKKI RICH: I came here and everything was green, and I-- honestly, I don’t even associate Utah with the desert. I don't see it as being part of the desert.

BRUNDIN: But it is a desert, getting about 13 inches of water a year. Yet Utah has the second highest per-capita water use in the nation. Much of the west is bone dry, baked hard in what is starting to look like the fifth year of a deep drought. You might expect conservation to be second nature to Utahans, but it’s not.

PETERSEN: I like to squirt off my porch and get whatever all there off and my grass clippings after I run my weed eater.

PETERSEN: I’ll squirt it, squirt the driveway and the sidewalk off a little bit, make it look good.

BRUNDIN: Why do you do that?

PETERSEN: Just so I live on a corner and everybody comes around and looks at my house, you know. I-- just what I’ve done all forever and it’s-- habits are hard to change, I guess.

BRUNDIN: Of course, you can find someone watering a sidewalk almost anywhere in the arid west. But water experts says Utahans waste an astounding 25 to 50 percent of all the water they use outdoors. Yet, on a visit to State Water Chief Larry Anderson, he spoke not of conservation but of pride that each year Utahans have had plenty of water to soak their lawns. 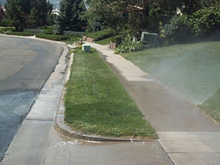 ANDERSON: This is a pretty serious drought in northern Utah. I don’t think anybody has missed a water turn on their lawns and gardens yet. I think we’ve done a wonderful job providing the water resources.

BRUNDIN: Conservation is almost completely absent from the public dialogue in Utah.

HOWELL: When are we willing to step up and to have our yards in the natural state versus lawn? (applause)

BRUNDIN: But in one memorable debate a few years ago, Senator Scott Howell did challenge Governor Mike Leavitt on statewide TV.

HOWELL: We live in the desert. It’s a reality of life. The governor I hope will lead the way and have the mansion landscape in natural sagebrush. I think it would look appropriate for the rest of the citizens.

BRUNDIN: The mansion is still surrounded by the water-guzzling Kentucky bluegrass lawns that Utahans love. Stephanie Duer, Salt Lake City’s water conservation coordinator, came to Utah from California. She found that here there are none of the restrictions familiar to residents of Colorado, Arizona and New Mexico.

DUER: Utah’s in kind of its own little world in many different ways, and the dilemmas and problems outside of Utah have been kind of ignored. And I think other western states have long ago had to come to terms with water conservation.

FRANKEL: We really are 20 to 50 years behind other western communities.

FRANKEL: We’re clinging to 19th century ideals about water development and conservation when the rest of the west is entering the 21st century understanding about water supply. And it’s a shame to see.

BRUNDIN: Frankel doesn’t see why it should take 50 years to cut water use by 25 percent-- that’s the state’s current goal-- when the city of Irvine, California cut water use in half in eight years. They did it by making users pay more. Frankel wants that to happen here. But state and local governments are using a softer approach.

BRUNDIN: There are also demonstration gardens featuring desert plants, and garden fairs like this one where a few homeowners are taking notes as they walk around.

MALE: So, what you folks have to determine is how you’re going to use the lawn and how much you want to be married to a lawn.

BRUNDIN: They’re called “heritage gardens,” a term harkening back to Utah’s pioneers. The term “zeroscaping” has a bad name. But despite that soft approach, Sheryl Isitch, with the Jordan Valley Water Conservancy District, says a growing number of Utahans are searching for ways to use less. Last year, in fact, people did cut water use by 11 percent.

ISITCH: There is a grassroots movement. There are a lot of people that are proactive and they’re interested. They’re screaming for this stuff. They’ll come out to the gardens and they’ll say, “Where can I get all this? Where can I find these plant materials?” Most of the nurseries that are mainstream don’t carry this.

BRUNDIN: While some Utahans flock to demonstration gardens, others hold a more traditional view, like Glenn Leonard back at the Museum of Church History and Art. He has faith that science and technology and human ingenuity will trump environmental realities.

LEONARD: There is a, probably a greater emphasis in Utah on that confidence that we can solve this one without worrying about conservation because of the history of success over great odds in Utah. The pioneers triumphed over the desert; so can we.

BRUNDIN: Triumph for ecologist Susan Meyer means living within the limits of the land. The desert can still blossom, she says, just with a different plant, maybe a firecracker penstemon or a round lead buffalo berry.

MEYER (IN CLASSROOM): The one at the top I’m cheating a little because this isn’t actually a Utah native, it’s from Idaho….

BRUNDIN: Meyer is teaching a native landscaping class at the Jordan Valley Water Conservancy District offices. The place is packed, young and old. Some are green thumbs, some just clutching pen and notepad, ready to write down strange names of native plants, plants that don’t need much water.

Meyer tells the group they are the new pioneers--the first wave of people committed to trying something new, like the pioneers before them, altering the landscape and doing it for the generations to come.