Join us for a visit to a nature sound recording workshop in the Sierra mountains of California. Photographer and producer Guy Hand tells us about learning to make the transition from sight to sound.

CURWOOD: Everything we know about the world -- the smell of pine, the feel of granite, the glow of distant stars -- comes to us through our senses. Photographer Guy Hand has found that favoring one sense over another can skew our perception of that world. He sent us this essay from a nature sound recording workshop in the California Sierras, where he tried listening to a landscape he had, up until then, only looked at.

[SOUNDS OF WALKING OUTSIDE]

HAND: It's five in the morning, and I can barely see the pine trees on the far edge of the meadow, and the mountains beyond. Twenty of us stumble out of our cars, half-awake, sip coffee and flick flashlights over a tangle of gear: headphones, recorders, mics, cables.

MATZNER: Keep your headphones on when you're recording and put them around your neck when you're not.

HAND: I'm here to get advice on recording birdcalls and waterfalls from the experts, but also to make a little comparison. I've switched careers, sliding slowly from photography to radio, from sight to sound.

HAND: When I first began fiddling with sound recording, I was struck by the similarities it shared with photography. I didn't even have to buy a new equipment bag, I just stuffed the old one with microphones instead of lenses, with digital recorders instead of cameras.

MALE: Oh, I see, so that's actually an external way that you can monitor the volume control.

HAND: Through the darkness, I hear another thing sound recorders share with photographers: a love of technobabble.

MALE: It comes out of here and goes into this box, and lets me do the switching and the volume control.

HAND: This new vocation feels familiar because sound, like sight, is a recordable sense, the only two of the five you can catch on tape.

MALE: You're hearing the snipe now.

HAND: But it's different, too. In the field, as soon as I put the camera away and pull on a set of headphones, the world seems to shift.

HAND: With a camera around my neck, I passed this meadow by a dozen times. I was oblivious to the swirling world of willets, swallows, snipes, and wrens.

HAND: I wonder what else draws people to nature sound recording.

HAND (In the field): So why are you doing this?

STUART: Well, I think you can really sort of get into the moment, when you're sitting with your headphones on, and the birds are around you, and you're just enveloped. 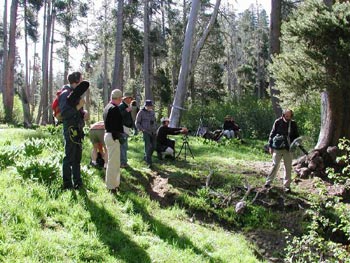 Participants in the Nature Sounds Society workshop begin to record in a Sierra mountain meadow.

CHRISTOPHERSON: The real reason I come out here is because it's a good excuse to go out in nature and shut up. [laughs]

HAND: Shutting up is one of the things I really like about sound recording. It requires a kind of passivity, a willingness to settle in and let the world come to you. Photography, on the other hand, feels active to me, even predatory. After all, we use hunting terms to describe it: shooting pictures, taking photographs, firing off a roll of film. Maybe that's why when we really need to listen, we often close our eyes.

CHRISTOPHERSON: My family said, well, you're going to take the cameras? But no, no, this time I have no cameras. I'm not going to be distracted by the visual images. I'm going to just go for the sound images.

HAND: Arlyn Christopherson is only the first of many here who bring up photography as a potential distraction. They say that sight too often dominates sound, and in effect blinds us to all the other senses.

MATZNER: There's so little attention put in the world of sound, even when natural history is the topic.

HAND: But Paul Matzner, curator of the California Library of Natural Sounds and one of the workshop leaders, reminds me that sound can also be distracting.

MATZNER: Many people in the large cities like New York, they wake up every morning to the huge sounds of garbage trucks out in the streets at five in the morning. They wake up at the same time as our ancestors would have woken up to bird song.

HAND: Paul puts a finger to his lips, then cocks his head to a birdcall he can't quite identify.

HAND (In the field): Hear something?

HAND: It takes him a moment to shift back to our conversation.

MATZNER: Um, I think that what sound recording does, and what the workshop does, is it helps to give us back our ears. 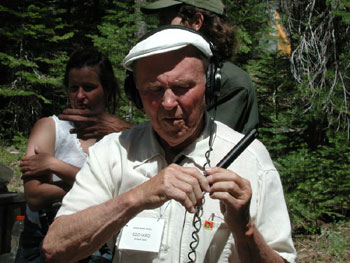 Richard Doell concentrates on the sounds he's picking up and isolating with a short shotgun microphone.

HAND: I know what Paul means. Just getting to this workshop required I run the auditory gauntlet of the Reno, Nevada airport, with its slot machines, canned music, and crowds.

HAND: But this forest of noise also made my arrival to the banks of this mountain stream that much sweeter.

STORM: One of the nicest places where you'll find delicate and beautiful water sounds are where the gradient is very shallow.

HAND: Jonathan Storm is trying to teach our group how to listen to the sounds of water.

STORM: Or where you have occasional gradient steps, like here, you have these little, these tiny little rapids with pools in between.

HAND: The way he floats over this stream, ear tuned to every little ripple and rill, I can't help but catch the excitement of seeing his eyes. I wonder why more people aren't hooked on the musicality of moving water.

STORM: It has a really nice low frequency, some mids and highs. It has a typical water sound people will recognize, as well as a little unusual water sound that people might not recognize.

HAND: As Jonathan critiques the creek, Rudy Trubitt, another veteran sound recordist, tells me why he thinks a picture of a stream is easier for most of us to appreciate than the recorded sound of that same stream.

TRUBITT: If you're looking at a piece of videotape and you pause the tape, what do you see? Well, you see a still image. If you're listening to a sound recording and you pause that sound recording, you hear silence. There is no way to experience an instant in sound, and spread that experience out over time in the same way that you can stare at a painting or a photograph for as long as you want. So that makes sound unique, in that it's more ephemeral.

STORM: That single little bit where it's bouncing up over the rock, and the air underneath it…

HAND: I begin fishing this high Sierra stream with my recorder, trying to hook the perfect little burble with a dangling microphone. But after an hour or so, boredom starts to seep in, like water into my boots. I mean, who is really going to listen to my little collection of slurps and gurgles anyway? But Frank Dorritie says, you never know.

DORRITIE: Every time you roll tape you're making a historical document. Some are more important than others, but some of them are really important. Some of them are profound.

HAND: Frank is a Grammy-winning audio producer and trumpet player. He reminds me that nature sound recording can capture nothing less than the fading voices of endangered species or the quiet call of some as-yet-undiscovered wonder.

DORRITIE: This is powerful stuff. You don't trifle with this. This is important, visceral…

HAND: Frank waves his arms over his head, turning his bearded face to the trees. Practicalities are only partly why he's here.

HAND: Frank thinks nature sound recording isn't as popular as photography simply because it hasn't been around as long. Way back when Kodak Brownies were snapping up every family vacation in America, an amateur recordist would have needed a trust fund or a truck to catch anything in the field with high-quality audio gear. Now, portable recording equipment is shrinking to the size and cost of a good point-and-shoot camera. Frank thinks this audio accessibility, coming at a time when so many voices in nature are fading, gives us an opportunity and an obligation to get out there and record.

HAND: Diane Ackerman in her book “The Natural History of the Senses”, says that 70 percent of human sense receptors are devoted to sight. That certainly suggests that our preference for the visual is deeply biological. But Ackerman also says our senses work best in concert, not competition.

So if this nature sound workshop gives me back my ears, it's really giving me back my sensory balance. It's firing up some forgotten circuits in my head, and that feels good. After all, the universe speaks to us across a wide field of wavelengths, and it's only through all our senses that we can truly hear what it's saying.

HAND: For Living on Earth, I'm Guy Hand in the Sierra Mountains of California.