In the latest installment in our occasional series “A Gap in Nature,” author Tim Flannery tells us the story of the Stick Nest Rat of Australia.

CURWOOD: Living on Earth has been bringing you stories of animals that are no more. Author Tim Flannery has collected a number of these tales in his book, A Gap In Nature. Today, he tells us about the stick nest rat. 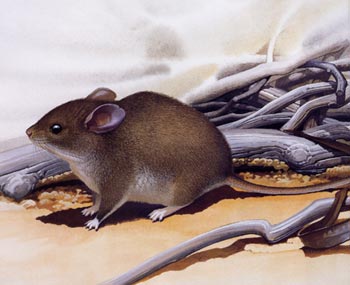 FLANNERY: Early European explorers in Australia could hardly have missed the presence of the stick nest rat. As its name suggests, this rat built a conspicuous nest out of sticks. The end result was a mound that could be up to three feet tall and stretch nine feet in length.

While its nest was big, the rat was not. It was about the size of a young rabbit, and had a light-brown coat and a long tail. It also had an easily tamable and delightful disposition, judging from the writings of Gerard Krefft. The 19th century explorer wrote that he had frequently taken 8 to 10 out of a hollow tree, and tamed them so that they kept about the camp, mounting the supper table at tea time for their share of sugar and bread. Krefft also had the unique opportunity, among white men at least, of turning the tables of the rat and of having it for dinner. He recalled that the flesh was white and of excellent flavor.

The stick nest rat was a herbivore. When Europeans introduced cattle and sheep to Australia, it’s believed those animals out-competed the rat for food and led to its decline. 1933 marked the last verified sighting of stick nest rats.

The animals were collected by anthropologist Norman Tindale. Remarkably, the event was captured on film, unique in the annals of animal extinction. The rats, which are in the collections of the South Australian Museum, make the briefest of appearances in Tindale's black and white film. They're held aloft in the hands of their aboriginal captives, who had set their nests on fire and chased them through the scrub.

There's a faint possibility that the species survived until at least 1970. In that year, an experienced bushman deposited some equipment in a cave in the Australian outback. He covered it with a tarpaulin and when he returned several weeks later he found a large, and as he put it, attractive rodent living under it. He caught the animal but let it go. From his description, it's just possible that it was a lesser stick nest rat. None has been seen since.

CURWOOD: Tim Flannery is author of “A Gap In Nature: Discovering the World's Extinct Animals.” To see a picture of the stick nest rat, and hear other segments in our series, go to our website loe.org. That's loe.org.