Ghost nets are lost or abandoned fishing gear that drift through the ocean, causing big problems for marine creatures. Living on Earth's Maggie Villiger reports on coordinated surveillance technology that aims to track down and get rid of these errant nets.

CURWOOD: Just ahead, a picture may be worth a thousand words, but sound can make you speechless. First, this note on emerging science from Maggie Villiger.

VILLIGER: Ghost nets are lost or abandoned fishing gear that drift through the ocean. They can be miles long and are deadly for marine life, since they entangle creatures in the open sea as well as snare on coral and atolls. These nets are extremely difficult to track down, but now scientists are combining a variety of technologies to figure out where ghost nets accumulate, and how to rescue them. 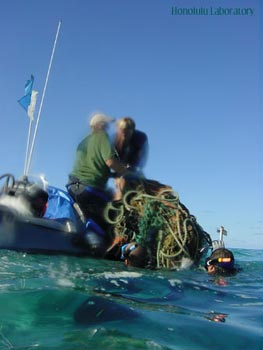 Researchers released four computerized buoys in the Pacific Ocean. These drifters phone in their locations, and scientists plot where the currents carry them. Presumably, ghost nets would tend to converge in these same areas. Next, scientists will use satellites and airplanes to collect information about the ocean's surface conditions. To see what's happening up to 50 meters below the surface, they rely on a kind of optical sonar called LIDAR. Green laser light is shot into the water, and its reflection bounces back off whatever it encounters: fish, logs, or maybe ghost nets. Whenever the coordinating computer detects something of note, an alarm goes off, and information from all the surveillance instruments is combined. Using the Global Positioning System, the researchers can pinpoint the precise location of the nets, which in the future they hope to pass along to cleanup vessels.

CURWOOD: And you're listening to Living on Earth.

Links for this story:

CURWOOD: The Cape of Good Hope is the southwestern-most point of the African continent, and in ancient times lions, elephants and leopards made their way to this amazing landscape, where the ocean meets brilliant blue sky. Today, the place is a bit more tame, but the first thing I remember seeing when I arrived there were baboons running rampant near what's called the Two Oceans restaurant. There are signs everywhere telling you not to engage them, and not to eat in the open, because the baboons see tourists as a source of food and fun.

But one young woman ignored the warning, and I saw a funny spectacle. She was walking down a pathway eating an ice cream cone, when suddenly a baboon with a baby on her back grabbed for it. Not thinking, she tossed her ice cream to her companion, who then became the unwelcome object of the baboon's attention. He quickly dropped the cone, and the baboon devoured the treat as she gave him a disapproving look. After all, the baboons are in charge of Cape Point, and we humans are there by their permission, as they see it. Indeed, as I encountered animals throughout southern Africa, I was reminded again and again that they haven't necessarily signed on to our concept of human dominion over all species.

Now, Living on Earth is offering you a chance to have your own African adventure. Thanks to Heritage Africa, we're giving away a 15-day trip for two on the ultimate African safari, with visits to several of Africa's most spectacular sights, such as Cape Point and the Serengeti. Please go to our website, loe.org, for more details about how to win this 15-day trip to visit some of Africa's most magnificent locales. That's loe.org for the trip of a lifetime.