The coffee bean was discovered in Ethiopia more than a thousand years ago. Since then, coffee has become the leading export of the east African nation. But a surplus of coffee beans on the world market has caused the prices to drop so substantially that Ethiopian farmers are having to look for other ways to make a living. Anne Marie Ruff reports.

KNOY: Coffee is the most widely traded agricultural commodity in the world. The planet's most popular stimulant is grown in more than 50 countries by more than 25 million people. The multi-billion-dollar coffee industry got its start in Ethiopia more than a thousand years ago, and coffee remains Ethiopia's largest export.

But world coffee prices have fallen to their lowest levels in 30 years, and Ethiopian farmers are having a hard time making a living. As Anne Marie Ruff reports, it's affecting both the nation's economy and environment.

RUFF: In the village of Choche, in the lush mountainous highlands of southwest Ethiopia, local musicians sing about their home.

RUFF: Nearly all of the thousand or so residents of Choche have turned out to hear the music, and to welcome agriculture officials and members of western non-governmental organizations. 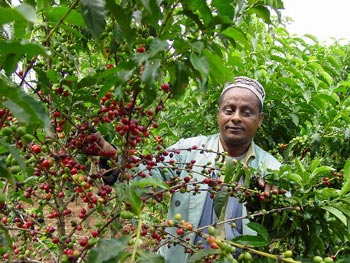 The visitors have come to see how an international crisis in the coffee market is affecting farmers in Choche, one of Ethiopia's main coffee-growing areas. According to legend, it was here that coffee was discovered, when a shepherd noticed that his sheep became unusually energetic after eating coffee berries. To this day, most farmers in Choche have spent their entire lives growing coffee on small farms.

MALE VOICEOVER: This is the only thing that we have around, only coffee. The coffee we produce is a class coffee.

RUFF: Sheik Taja Nuru is proud of the coffee he produces, but the deep wrinkles on his 45-year-old face belie the problems that confront coffee farmers.

MALE VOICEOVER: We are working day and night. We are thin by labor, but are not getting anything out of it. Because of the fall of the price, we don’t get any profit, we are hurt because of this.

RUFF: Choche’s farmers harvest coffee berries, which are then sold to a processor or a farmer's cooperative. The seeds of the coffee berries are then processed into coffee beans. The price Choche's farmers receive for their unprocessed coffee berries has fallen 90 percent in the last ten years. The three cents a pound they now earn is not enough to clothe their families, send their children to school, or buy food for more than one meal a day.

Zarihun Alemayo echoes farmer Sheik's frustration. He works with coffee farmers to organize them into cooperatives so they have more influence in the market. 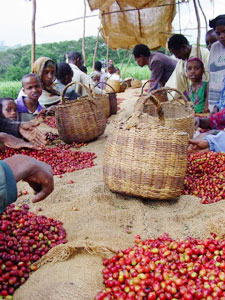 ZARIHUN: And we claim that God gave us coffee, and we gave it to the world. And for this gift it seems that the world is not paying us.

RUFF: The situation in Ethiopia is being repeated in almost every coffee-growing country. The supply of coffee used to be regulated by the International Coffee Organization, which imposed export quotas on its coffee-producing member countries. But in 1989, the U.S., the biggest importer of coffee, withdrew its membership, and the International Coffee Agreement collapsed. Vietnam and Brazil, especially, responded by flooding the market with cheap, lesser-quality coffee that drove prices down. In Ethiopia, the low coffee prices aren't only hurting farmers, but the nation's economy as a whole.

[SOUND OF BEANS BEING POURED]

RUFF: In Ethiopia's main coffee warehouse in the capital of Addis Ababa, coffee beans are big business. Coffee makes up about 60-70 percent of the country's exports and generates most of the taxes that fund the government. Ethiopia's prime minister, Meles Zenawi, is running a government nearly bankrupt from lack of tax revenues. He says farmers are responding to low coffee prices by abandoning coffee for more lucrative crops.

MELES ZENAWI: Some of the farmers are uprooting their coffee trees and replacing them with qat trees. It's a mild narcotic. The social implications of such a shift are very serious.

RUFF: Fresh qat leaves are profitably exported to Yemen, Djibouti, and Somalia. Qat is also starting to be exported as an illegal drug to the U.S. and Britain, where it fetches as much as $180 dollars a pound in East African communities. The growing drug trade has environmental implications. Qat will not grow in the forest; it requires full sun. So farmers who convert from coffee to qat are cutting down forests, forests that traditionally shade Ethiopian coffee plants, in order to do so.

Government officials say they have few statistics about the scale of recent crop conversion, or figures about how much forest has been lost. But Barbara Fiorito says the situation is serious. She's the chair of the board of Oxfam America, an international advocacy organization dealing with issues of poverty.

FIORITO: So, many thousands of acres in the rain forest that exist are there because coffee is grown underneath this high umbrella. So, therefore, if the coffee price continues to decline, and more coffee land is turned under, there will be logging because there will be no need for the high canopy that protects the best coffee in the world.

RUFF: Oxfam has launched a coffee rescue plan to urge business and political leaders to take immediate action. Since half of the world's coffee is bought by only five companies--Procter and Gamble, Kraft, Sara Lee, Nestle and the German company Tchibo--Fiorito thinks their actions are key.

RUFF: Oxfam is also promoting Fair Trade coffee as part of the solution. The Fair Trade seal on coffee packages means that it has been bought directly from farmer's cooperatives. Oxfam also proposes a fund to help farmers from other coffee-producing countries, such as Vietnam, to find alternative ways of making a living.

Workshet Bekele is a major exporter of Ethiopian coffee. He thinks Oxfam's proposals are encouraging, but he believes they won't go far enough.

WORKSHET: It's a good effort but as far as I see it, I think in order to bring fair trade to all, you have to bring a quota system.

RUFF: Workshet says that if the U.S. is serious about helping poor countries, they need to rejoin the International Coffee Organization, so that farmers can get a decent price for their high-quality coffee.

For Living on Earth, this is Anne Marie Ruff in Choche, Ethiopia.