No Go on ANWR

There was a crucial vote this week in the U.S. Senate on whether or not to open the Arctic National Wildlife Refuge to drilling. But as Living on Earth’s Anna Solomon-Greenbaum reports, the issue is not dead.

CURWOOD: On another matter of oil, there were new developments in the past week in what's now becoming a perennial question on Capitol Hill--whether or not to open the Arctic National Wildlife Refuge to exploratory drilling. Living on Earth's Anna Solomon-Greenbaum has the latest details.

SOLOMON-GREENBAUM: The final speeches on the Arctic National Wildlife Refuge came just hours before President Bush's deadline for Saddam Hussein to disarm. And though much of the rhetoric focused on jobs, caribou, and pipelines, the impending war was an undeniable presence.

MURKOWSKI: There's kind of an 800-pound gorilla that is sitting in the chamber now.

SOLOMON GREENBAUM: Senator Lisa Murkowski, the Republican freshman from Alaska, said the conflict in Iraq is yet another reason to open the Refuge for drilling. Murkowski reminded her fellow senators that U.S. imports of Iraqi oil have nearly doubled over the past several months.

MURKOWSKI: We send billions of dollars over there to Iraq to Saddam Hussein, who in turn sells us the oil that we place in our aircraft and we send our men and our women over to defend no-fly zones, when we could be producing domestically.

SOLOMON-GREENBAUM: The details of the Refuge debate were the same points lawmakers have been making for decades. They disputed how much oil it would produce, how many jobs drilling would create, even whether the Refuge is pretty or not. Most senators had made up their minds a long time ago. But there were a few fence-sitters, and when the tally began, it was these senators everyone watched.

SOLOMON-GREENBAUM: The motion to keep the Refuge off-limits won out, 52 to 48, but minutes after the vote both sides said the battle would continue. In other words, nothing really changed. The Arctic Refuge has become an ongoing symbolic and political behemoth. It's more talked about than perhaps any other single environmental issue.

Roger Herrera is with Arctic Power. His group is funded largely by Alaska. It has received $7.5 million dollars from the state in the past ten years, and it's sole purpose is to lobby for drilling in the Refuge. But Herrera says environmental groups are as dependent on the conflict as anyone. 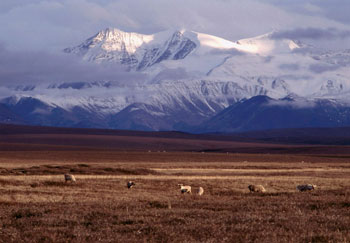 HERRERA: Oh, I think the worst thing that could happen with the environmental groups would be the passage of a wilderness bill which would close the coastal plain and take it away from their fundraising portfolio.

SOLOMON-GREENBAUM: Environmental groups acknowledge the Refuge plays a major role in their campaigns, but Pete Rafle of the Wilderness Society says the idea that they like the clash over the Refuge for the donations and attention it rakes in is insulting.

RAFLE: This is not about a perpetual campaign. We want to win this thing and win it for good. That's the ultimate goal, and anyone who says otherwise is trying to spread some other kind of story.

SOLOMON-GREENBAUM: For this year, at least, the Refuge debate may be closed. But drilling proponents pledge they'll be back, which means on both sides the debate and the dollars will keep flowing.

For Living on Earth, I'm Anna Solomon-Greenbaum, in Washington.

CURWOOD: For the latest news about the war and the environment, go to our website, loe.org. We have stories on efforts to prepare for any new oil spills in the Persian Gulf, the impact on people and wildlife, and how the region is still feeling the effects of the first Gulf War. That's loe.org.