The Army is working on improving its fuel efficiency, both to cut costs and to increase its mobility. Host Steve Curwood talks with Paul Skalny of the Army’s National Automotive Center, on how the military plans to use hybrid and fuel cell technologies – and how its partnerships with Detroit could affect consumer vehicle options, too.

CURWOOD: Welcome to Living on Earth. I'm Steve Curwood. Okay, so you think you’re paying through the nose to fill up your vehicle at the pump. Well, consider the bill for the U.S. military. The cost of moving fuel to a war theater can boost its price to about $10 dollars per gallon. And if it has to be airlifted in, that price tag can reach $400 dollars a gallon or more.

And think about how much fuel the Army burns up. Just keeping the 3rd Infantry Division moving in Iraq, for example, takes about one million gallons of fuel everyday. And at times, it's had to slow down its advance for fear of running out. Paul Skalny is the Deputy Director of the National Automotive Center of the U.S. Army. The Center partners with the civilian car and truck industry to bring innovations to military vehicles.

One goal is to reduce fuel consumption by improving efficiency. Mr. Skalny, aside from cost, what's the Army's interest in decreasing its fuel needs?

SKALNY: There has always been a recognition that we had to be more fuel efficient. But now, as we're taking a look at conflicts where we need to get quickly into where we are, we really need to be able to take our vehicles, and all of the support equipment that we need, there very quickly. And it makes more sense not to have to take as much fuel if your vehicle are more fuel efficient. Plus, in battle, what you want to be able to do is sustain yourself for longer periods of time without refueling, because then you can stay in the fight a lot longer.

CURWOOD: How much of what the Army has to haul around is fuel?

SKALNY: In certain situations, 70 percent of the bulk tonnage that we would take to war would be fuel. If you're less fuel efficient, you certainly have to take more fuel in battle, which means you have to have a lot more of what we call a logistics tail. We have to take a lot more support equipment to be able to support the soldiers that are in the fight.

CURWOOD: What's the baseline here? What kind of mileage do the vehicles you're looking at get right now? I understand that a tank gets what, a mile a gallon, a half a mile a gallon, something like that.

SKALNY: It's anywhere from a half mile to a mile a gallon. At least that's my understanding. And it depends on where you've run the vehicles. But, for example, in a Humvee, it might be anywhere from about nine to 11 miles per gallon. And then when you start looking at the bigger trucks, they certainly go down from there.

CURWOOD: You're working on a number of alternative fuel technologies there. I'd like you to explain to me the advantages of each of these. First, what about hybrid electric? We already see that in passenger cars.

SKALNY: Yes, you do see that in passenger cars. And, from the standpoint of the hybrid electric, you have the opportunity to both work on maybe having a smaller engine, because you're assisted from your battery standpoint. A hybrid electric solution also allows us to give us better acceleration, to be able to generate power on board and, therefore, not effectively have to bring some of the generator sets that we have to bring into the battlefield. 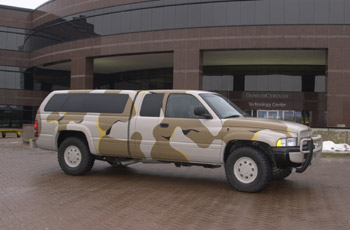 CURWOOD: With a hybrid electric, you can also be quiet.

SKALNY: Yes. When you have the batteries and you've charged the batteries, you're able to actually run silently. And that's very important in the military, particularly when it comes from a stealth standpoint.

CURWOOD: Now, what's the interest in the military in fuel cells? Of course, they came from NASA, to begin with, in the space program.

SKALNY: We are really taking a very close look at what fuel cells will do for us, certainly from a fuel efficiency standpoint, certainly from a clean power standpoint. The critical piece here for us is that we're able to look at fuel cells for soldier packs. And so the small fuel cells, fuel cells that can be used as auxiliary power units on vehicles to generate the power to run some of your hotel loads, like your air conditioning or your heating or whatever it might be. 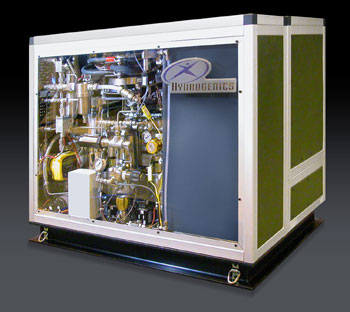 Also, from the standpoint of, eventually, be able to use the fuel cells as a full-up power plant in a vehicle. We also know that fuel cells are a little bit further out in terms of its commercial application, in the amount of fuel cell vehicles that are going to be sold. But it pays us in the military to have to be very, very much in tune with what the industry is doing, and to be on the leading edge of getting this technology into our systems.

CURWOOD: And what kinds of vehicles are you talking about putting these technologies into at this point?

SKALNY: Really across the board. We have to be careful about how we do them, but we're talking about putting these technologies into trucks, our tactical trucks, as well as into our combat fleet. 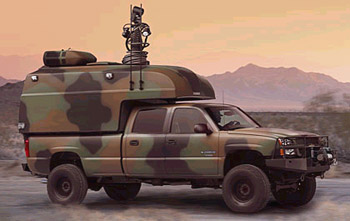 SKALNY: If you were to look on TV next week, you won't be seeing the hybrid solutions or the fuel cell solutions out in a battlefield. In the case of hybrid electric, one of the programs that we are working is a hybrid electric Humvee. That, potentially, is going to be sitting out in the field in the 2006,2007 timeframe. As we take a look at our objective force and our future combat systems of systems, you're going to be looking at a little bit after that.

CURWOOD: So, the military brought us the microchip, and Velcro, and garage door openers, and everything like that. How much of a driver for civilian technologies, civilian cars and trucks, will the work of the National Automotive Center be, do you think?

SKALNY: Well, what happens at the very beginning is the military may be an early adopter of some of this technology. Because for us, a return on investment is not, maybe, just based on, let's say, a consumer price and the dollars that would come in in terms of profits from an industry partner. So what we may do is, we may be an early adopter of these technologies. But industry is working right along with us to, obviously, incorporate these or integrate them into commercial products. We just may be able to push the technology a little bit faster. And in the long run, this technology is going to get into the vehicles that we drive as consumers, and fleet owners drive in terms of truck fleet owners.

CURWOOD: Paul Skalny is the Deputy Director of the National Automotive Center of the United States Army. Thanks for filling us in, Paul.